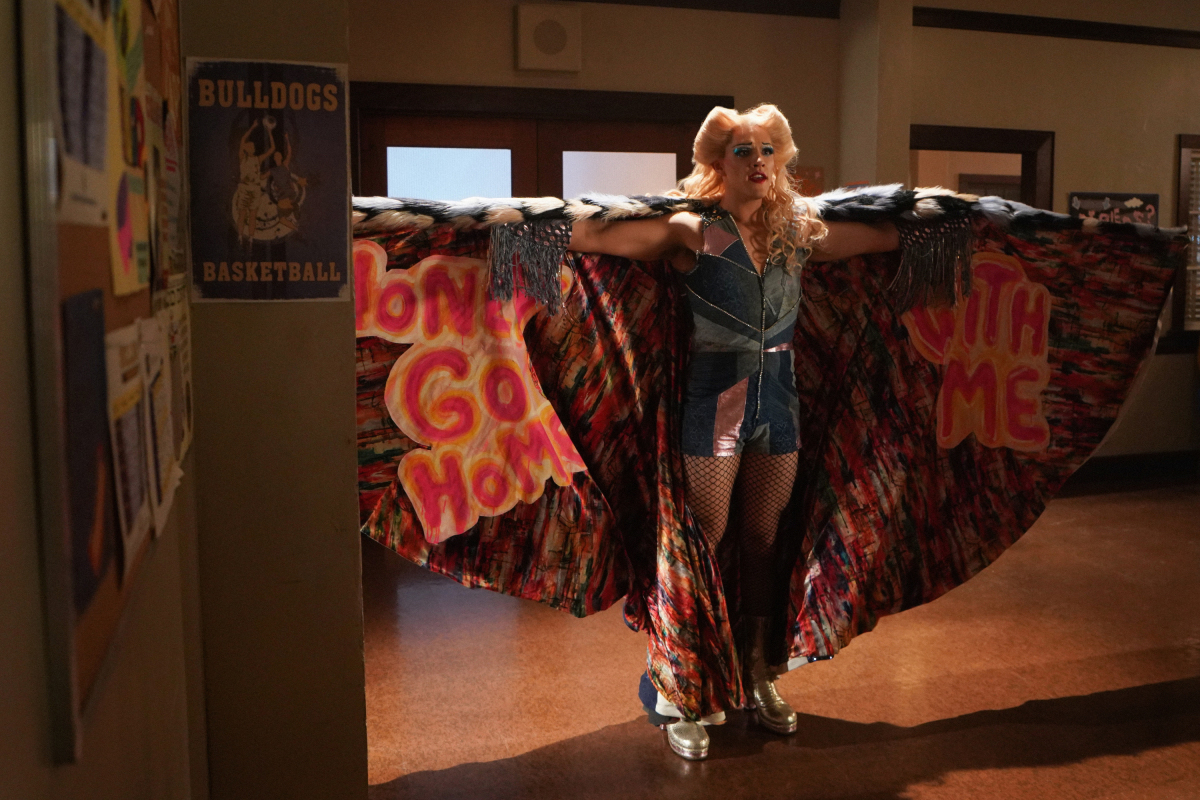 I was worried about Riverdale trying to do Hedwig and the Angry Inch from the moment it was announced in January. Mainly because they were taking the “it’s controversial” route as if Riverdale hadn’t already done Carrie and Heathers as their previous musicals, without commenting on controversies therein. Confirming my fears, the episode made questionable choices in depicting numbers and characters from Hedwig while not explicating the show’s rich and complicated background.

In the episode, named “Wicked Little Town” after a song from Hedwig, Kevin Keller decides he’s going to do a number from Hedwig for his slot in the Variety Show. Keller is played by actor Casey Cott, who has a Broadway track record—yet the character is normally the director of the Riverdale musicals and never in them, which is a mistake.

Problems arise when Mr. Honey, the principal, refuses to let Kevin proceed and says that he should do something from a classic musical like Oklahoma! or Carousel. As someone who finds most “classic” musicals extremely problematic and often sexist and racist, I screamed at the irony of this suggestion. The show missed a chance there and did not point out that many of these musicals (unless staged otherwise, as some modern revivals are undertaking) are both of those things. So … bad on you, Riverdale. After Mr. Honey’s edict, the Riverdale gang gets behind Kevin and everyone starts singing the songs in different scenes and staging in defiance of the principal.

Riverdale should not have done Hedwig and the Angry Inch in this fashion for a lot of reasons. The beloved cult musical has a long history on stage and screen, and its music is fantastic. But its story, about a genderqueer East German rock singer’s life, loves, and career in America following a botched sex change operation, it heavy with history and explorations of identity; it shouldn’t be undertaken lightly without more context. In many ways, Hedwig provides a perfect soundtrack for teenagers’ rebellion to outdated norms. But it shouldn’t just be masqueraded around without further discussion. Much of this came off like a sort of crass Hedwig cosplay.

How Riverdale approached Hedwig is just plain odd. Not a single song was sung by just one person. Everything was a group number and kept relating back to these teenagers saying how important this cult musical is for them. And yes—an important element of musicals is for us to relate and find something in them despite when they were actually written. But how these particular teens relate is to represent their own problems with Mr. Honey saying a sexually charged musical might not be appropriate for high school in relation to Hedwig’s struggles … you get the problem, right?

Let’s get into what is particularly baffling to me.

checkin in on Riverdale pic.twitter.com/G5aXrJ5pyE

Using the “We’re Gen Z” as an excuse as to why Kevin should be allowed to perform Hedwig at school is interesting. Part of me wonders what song Kevin wanted to do because if he wanted to do “Origin of Love” he probably could have just played it for Mr. Honey and then this entire problem wouldn’t have been a problem. But if Mr. Honey was that against it from the get-go, my guess is that Kevin Keller wanted to roll up singing “Sugar Daddy” (which we WILL get to later). There are several ballads from Hedwig that would be considered perfectly acceptable even in the most conservative school, lyrics-wise.

But other than that sense of “We deserve to sing a musical that is not appropriate for how old we are supposed to be,” there isn’t really a reason behind the mass decision to rally for Hedwig. In fact, they have Kevin, one of the show’s openly gay characters, dress like Hedwig multiple times throughout the episode for no reason other than I think they knew someone had to dress up like Hedwig and … again, this choice is questionable. Genderqueer identity and exploration are at the heart of Hedwig and this isn’t really discussed. This would have been an important topic for a show like Riverdale to touch upon, even just in more developed dialogue, but it misses this opportunity.

At one point, Kevin comes to school dressed like Hedwig, takes over the school announcement system and starts singing “Tear Me Down” because the principal will not let him perform Hedwig. It’s maybe the only time of this episode I enjoyed a number because it’s the only time a song made sense in terms of its employment in the episode.

Well, that’s a lie. The opening of the episode is everyone singing “Wicked Little Town” about the town of Riverdale and like THAT was on the nose.

“Wig In a Box” is probably one of the most heartbreaking songs when you stop and think about what it means for the character of Hedwig. Hedwig is forced into her new life and identity in America, but when she can turn to her different wigs, she feels like these powerful archetypes of women. So then … Riverdale makes it into a make-over montage for Kevin.

Then, incomprehensibly, Cheryl Blossom tries to fix everything by singing “Sugar Daddy” at her principal as if that was the best way to go about this. Because “Sugar Daddy,” a song about how Hanchen (Hedwig’s name before the sex change operation) ends up with Luther (who pays for the operation and promises to bring her to America) and how Hanchen saw Luther as a way out of East Germany, is the perfect thing for a 17/18 year-old to sing to an adult man who is in charge. Great work.

The problem isn’t that Riverdale decided to just sing songs from Hedwig and the Angry Inch. It’s that it took a musical that is sexually charged and filled with conversations about gender, sexuality, politics, and trauma and made it about teenagers struggling with their relationships (all the heterosexual relationships were at the forefront, I might add) and doing their homework.

One of my favorite songs in the show comes at the very end when Hedwig’s partner Yitzhak (a character Riverdale just decided to not even mention) has their moment to dress in one of Hedwig’s wigs. It’s poignant and moving; Lena Hall won the Best Featured Actress in a Musical Tony for playing Yitzhak in the Broadway revival. Why do I hate Riverdale‘s version? Because again, it’s just a random group number with literally no purpose.

I don’t think I’d be as mad if the whole reasoning behind this episode wasn’t that the show was controversial with very little explanation as to why it was controversial. Mr. Honey makes a point of bringing up the fact that the show was an off-Broadway cult classic (and film) until the most recent Broadway run. But Riverdale‘s way of explaining why it’s controversial is in passing instances that are then filled with everyone singing the songs because they think they’re fun. This was a missed opportunity to have a dialogue on important topics with Riverdale‘s younger-skewing audience.

Yes, the music of Hedwig and the Angry Inch is what makes it so special, but the music also holds a story of Hedwig’s trauma, loss, and betrayal in the midst of exploring her own gender identity. None of which Riverdale touched on. If Mr. Honey had even said “This show is taking on gender politics and I don’t want that in my school” and then every student said “Oh really, fine, we’re singing them anyway” then I would have been happier. This would have made it timely and their protest relevant. But it was as if the show didn’t want to explain the darker parts of Hedwig—as if Riverdale doesn’t have murder, so much teenage sex, and a weird cult that they all just escaped from.

The song that is probably the most recognizable from Hedwig is “Origin of Love.” Based on a story from Plato and our own desire to find our other half, Plato’s story relates how originally humanity came into being as three sexes. We were four-legged, two-faced creatures “glued up back to back”—men and men, women and women, and men and women. Then the Greek gods, fearing the might of humanity, split us in half—so that we spend our lives in search of the completeness of our other, missing half. It’s one of the few classical “origin” stories that includes homosexuality as a natural state of mankind. You wouldn’t know that from Riverdale’s version though because it cuts out literally every bit of this explanation from the original song.

I will say thank you to Riverdale for giving me more Cole Sprouse and Casey Cott singing, because the only parts I did enjoy were when the two sang their bits from Hedwig. I did absolutely hate the Betty/Archie storyline, as do many fans of the show.

I’m sure there are many young people who are now going to go look at Hedwig and the Angry Inch and for that, I’m grateful. But that doesn’t mean I like or understand the reasoning behind how the CW drama tackled one of my favorite shows.

Hedwig and the Angry InchRiverdale