Revolutionary Girl Utena Newbie Recap: Episode 3, “On the Night of the Ball”

"The girl who stole my brother from me is about to be humiliated." 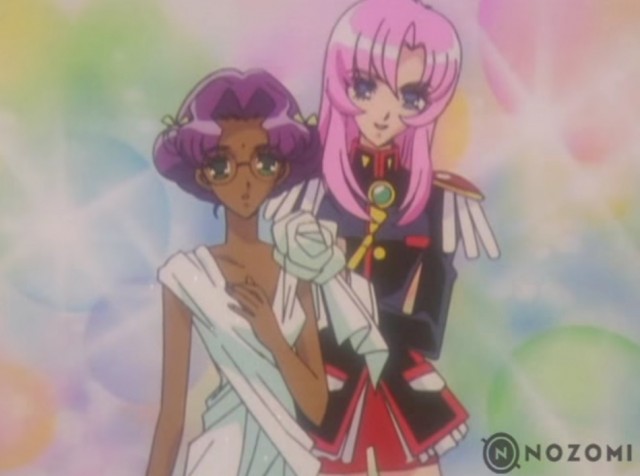 The last we saw on Revolutionary Girl Utena, Utena had inadvertently invoked the spirit of a mysterious prince from her past in her duel against Saionji, and in turn sealed her and Anthy’s fate together. But the fallout from this event, which Utena was originally going to throw, after all, has dire consequences for both her and the Rose Bride.

The episode begins with a flashback to the prince/princess origin story—a princess, having lost her family, is given hope and a rose ring from a mysterious prince. She then gains her self-inspiration from this event; it should be pretty clear that the princess in question is Utena, though she’s still putting the pieces of her past memories together. 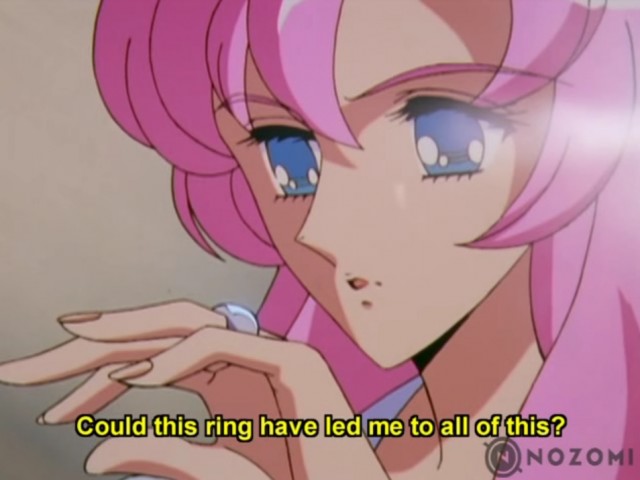 In her present, though, she’s still only hanging out with Anthy and Chu-Chu, the sole living creatures in their haunting dormitory. And though Utena is quite popular (more on that later), Anthy reveals that her only friend, besides perhaps Utena, is Chu-Chu. 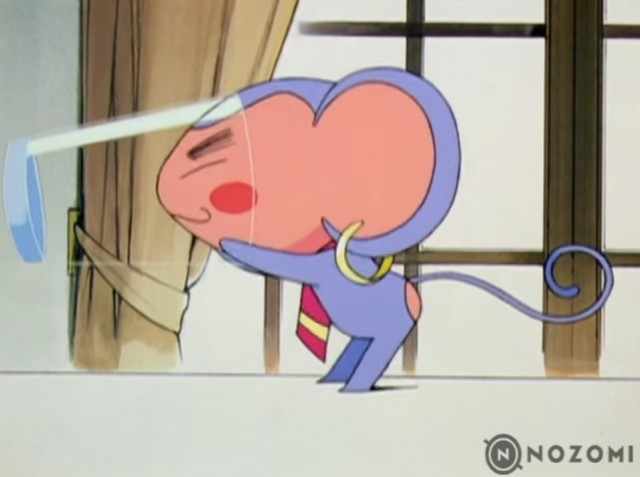 Utena, ever the positive person, tries to turn her living situation with Anthy (not to mention their, erm, engagement?) into a helpful experience for the much shyer girl. She tells Anthy to stop calling her “Miss Utena/Utena-sama,” but the illusion of her non-esteemed status is shattered as soon as she steps onto campus and is assaulted by a chorus of starry-eyed girls. 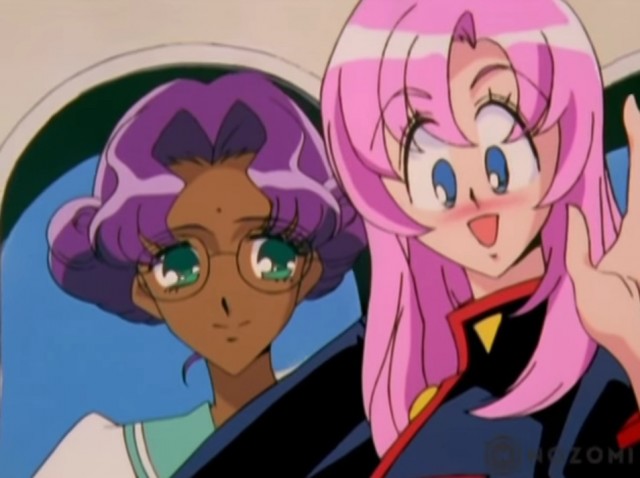 I just thought this screencap was hilarious.

Because for all Utena has done for and about Anthy, she still refuses to acknowledge the bond that’s been built between them as anything other than happenstance; the “Rose Bride”/engagement talk is, to her, very confusing, especially when other people start to get involved.

One such person: Touga Kiryuu, the red-haired, popular student council president. After watching both of her duels with Saionji (jerk) from afar, he finally introduces himself in person to Utena. Utena’s surprised that he’s friendly (though far from a friend) to Anthy, but is inherently suspicious of his involvement with the mysterious dueling group regardless. 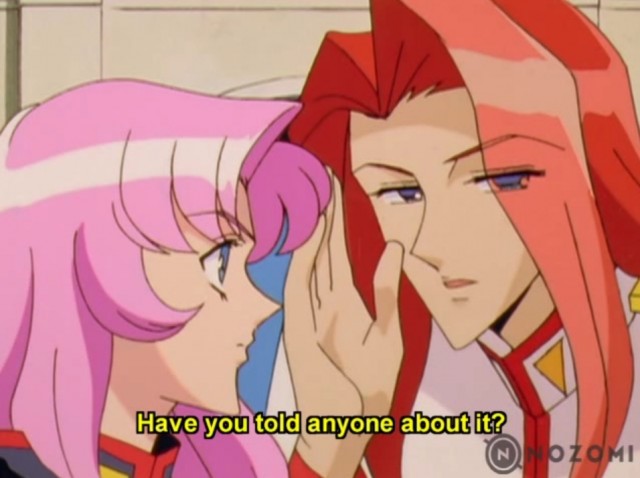 It doesn’t help that he’s kind of a huge cheeseball.

But what really sets her on high alert—Touga is the first male character with whom Utena has had a semi-romantic interaction. While girls flutter around her, and Anthy’s engagement seems quite clear from the viewer’s perspective, Utena herself is still very much receptive to the kind of male flattery that Touga delivers in spades. However, she’s also perceptive and self-aware enough to take herself out of it… except, he too has a rose ring. And with that, she sees in him a connection to her past, despite her reservations about his character. 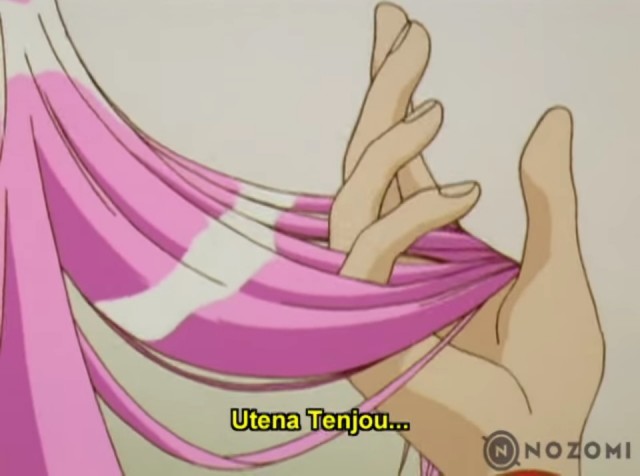 NEVER TOUCH A GIRL’S HAIR WITHOUT HER PERMISSION, YA JERK.

As for him? Touga, for his own shady part, is mostly investigating Utena in relation to the overall role of the student council. In a meeting, set up with the usual theatrics (chick cracking the eggshell of the world, etc.), Touga reveals that Saionji’s been in his room alone, crushed by his loss to Utena. As for her—while Touga is in part entranced by her gender-bending beauty, he’s also curious as to her role in the rose ring saga. Why hasn’t she received a letter from the End of the World? Why does she have that ring?

Reeling from her close encounter with Touga, Utena is surprised by a very enthusiastic Wakaba (who warns her friend of Touga’s supposed playboy tendencies), only to learn that fellow students are spreading nasty rumors about Anthy’s involvement with Saionji’s disappearance from social life. In face, Anthy’s literally been slapped around (Anthy!!!) by a group of mean girls when a savior comes to her aid. But no, it’s not Utena; it’s Nanami, a character whose rose-embroidered entrance makes her particularly notable. 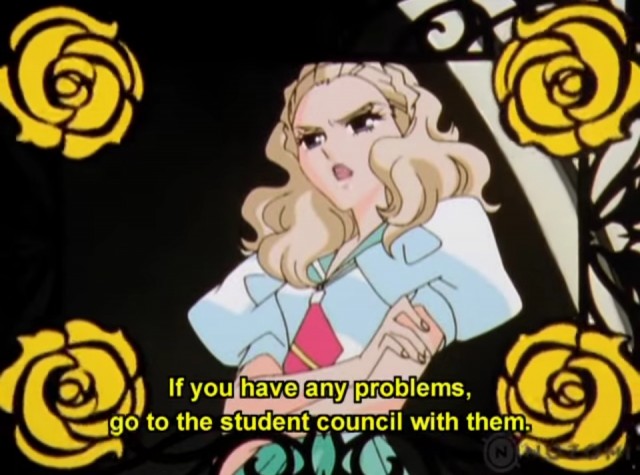 It’s nice of the show to make these defining character entrances so clear.

But, Nanami wasn’t just hanging around to save Anthy; in fact, she’s there to tell the Rose Bride that despite her utter lack of social life, she’s been nominated for the Dance Queen title at an upcoming dance. Between Anthy’s naivete regarding these big events and Nanami’s rather shrew-eyed character design, the whole thing feels like a Carrie-level setup.

Setup or not though, Utena’s thrilled that her mysterious roommate/fiancée? is getting the spotlight of the school. But when Anthy gets a dress from the committee for the dance, Utena receives one too: a hyper-feminine, frilly pink dress, from none other than Touga. After Utena expresses disgust at her “gift,” Anthy too decides to withdraw from the dance, citing social anxiety. 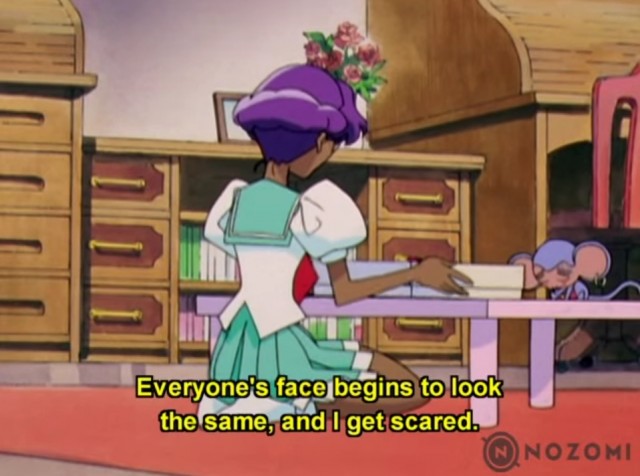 Utena, recognizing that Anthy will never make any friends at this rate, takes one for the team and decides to attend the ball. But, what’s in store for Anthy?

Things become clearer on the night of the ball, when it’s revealed that Nanami is Touga’s little sister. Surely, she’d have some more perspective on the events going on, but she’s absolutely clueless as to who Utena is, and why most of the student body loses their minds at the sight of Utena in explicitly feminine clothing. 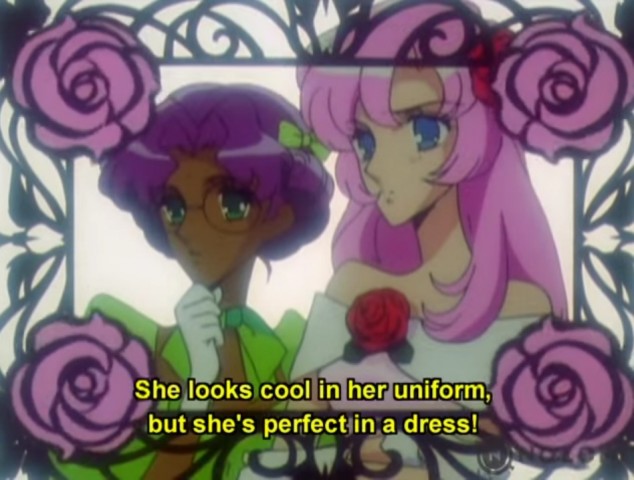 Touga, for his part, pounces on Utena, flattering her and even getting her to feel a flutter in her heart. This all goes to hell when Nanami reveals her sinister plot. 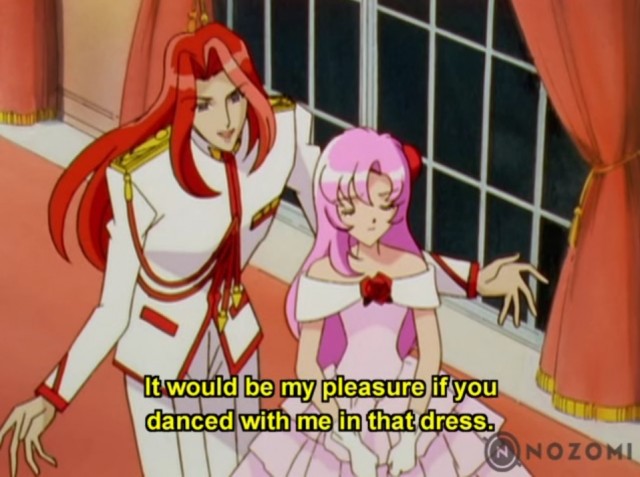 Nanami, for her part, has set Anthy up for the latter’s perceived slights against Touga and presumably the student council. (Or, that’s how the scene read to me.) A waiter “spills” champagne on Anthy’s custom committee-sent dress, and the dress promptly starts dissolving with the liquid. It’s a desperate scene, and one that triggers Anthy’s social anxiety. But then—Utena to the rescue!, as she 1) rips off her dress (to the despair of Touga) to reveal her boys’ uniform and 2) whips a tablecloth into an impromptu toga-esque garment for Anthy to wear over her ruined dress. It’s a totally dramatic, ridiculous scene, which is right in line for the series, but it’s also a reminder of Utena’s inherent goodness and her ability to always do the right thing, even in the face of her own desires.

Best Dressed for sure.

To be quite honest, this episode felt more like a filler than anything to move the plot forward; in fact, a lot of the animation was recycled from the first two episodes. But, anything that gets Utena to show off her winning personality is definitely a plus for this viewer. Now, let’s see a little bit more of Anthy’s inner life and the student council’s revolution-stirring workings, and then we’ll really get going.

Tweet your thoughts on Episode 3 of Revolutionary Girl Utena to me here. This should go without saying, but NO SPOILERS PLEASE!