Book Review: Ashley Poston’s The Princess and the Fangirl Is a Sweet Fandom Fairy Tale

Four out of five uniforms in the perfect shade of blue. 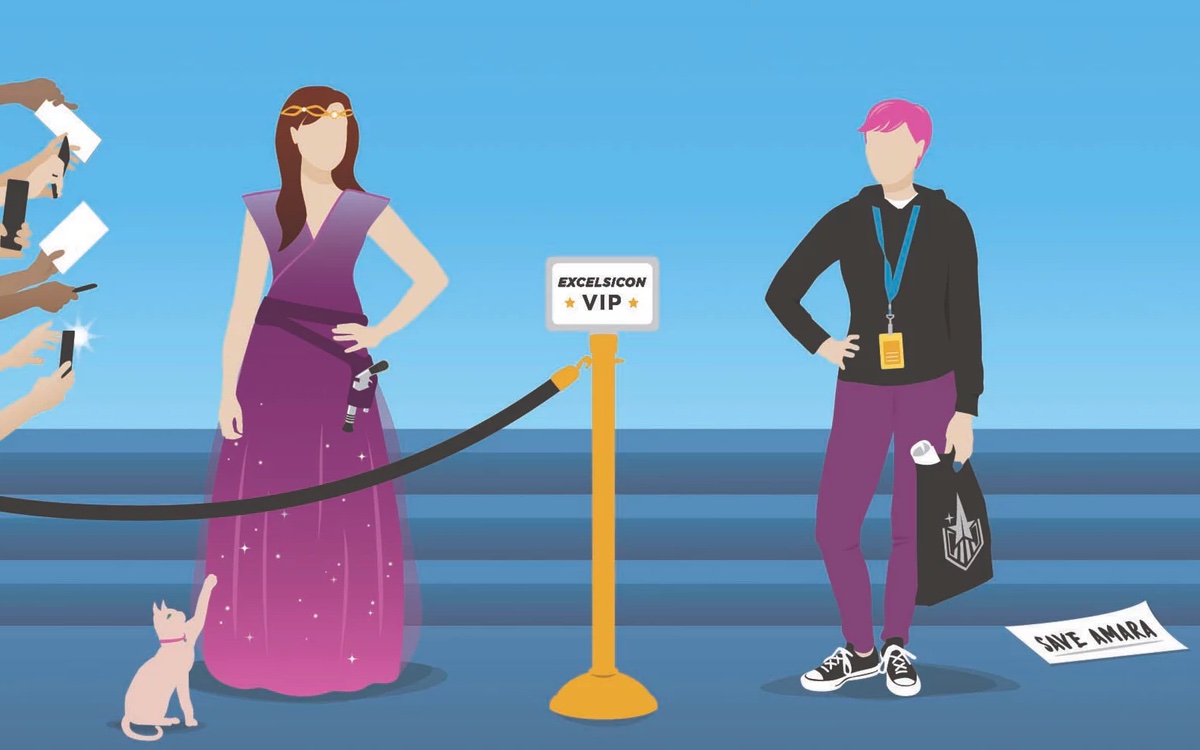 What would it be like to switch places with the actor who played your favorite character? Would you use that to maybe change the fate of that character?

That’s the basic premise behind Ashley Poston’s Geekerella followup novel, The Princess and the Fangirl. Poston’s 2017 fandom fairy tale stole hearts with the story of Elle, a writer and fan of the Star Trek-esque Starfield, and Darien, the quietly geeky star of the reboot of the franchise. This is less of a sequel and more of a followup, centered on Darien’s costar, Jessica Stone, and her lookalike, Starfield fan Imogen.

The plot is a Prince and the Pauper retelling, with Jess taking the place of a regular fangirl as Imogen steps into Jess’s famous heels. Jess is on the hunt for the person who stole her copy of the script for Starfield‘s sequel, as Imogen hopes to save Jess’s character, her beloved Princess Amara. Along the way, romance blooms for both girls as they learn a lot about how the other half lives … and figure out who they want to be along the way.

I came into this book a huge fan of the way Poston crafts fandoms. Geekerella made me cry happy, moved tears on more than one occasion. My expectations for the followup were sky high, especially after hearing about Imogen and her spunky #SaveAmara initiative, and I was not let down at all.

Maybe it was reading the book over the course of my time at a con this past weekend, but Poston captures fan culture in a way that I’ve found many others struggle with. It feels real, down to the nitty-gritty parts of comic cons and the occasional vileness of online fandom.

Imogen felt, at times, like a reflection of myself, though I’ll be the first to say that she and I have very different tastes in ships. I remember tweeting frantically to save my favorite women from being fridged for manpain.

While I never started a petition to save my favorites from certain doom, I certainly have used hashtags to try to get creators to take notice of pleas for inclusion. Imogen’s self-described Gryffindor spirit felt achingly familiar to me, and just as I saw my writer self reflected back in Elle, I saw my fangirl side reflected back in Imogen too.

Jess, a supporting player who comes off as somewhat cold in Geekerella, also feels delightfully real here. In the first book, Elle starts an online movement heaping vitriol on Darien before she meets him, because she doesn’t like his previous acting credits. I never thought anything of that, just that Elle was expressing her opinion (which changes once she falls for Darien and also sees his work), but here, we get a look at what it might feel like when the vitriol doesn’t stop.

Jess is facing a Daisy Ridley-esque scenario where she’s getting constant hate from the fandom, this time for “ruining” the character of Amara and the franchise. She’s struggling to leave the role behind after being killed off in the first film, not knowing what it means to the fans who love her and her character. She’s only interested in award contenders, which means leaving Amara behind, and getting the hate to stop, but spending time in Imogen’s shoes allows her to get a glimpse into the power the fan community can have and help her understand what she really, truly wants.

I loved both protagonists, as well as Harper, Imogen’s online friend and fan artist who catches Jess’s eye and might be stealing her heart. While the book takes place over a shorter period of time than Geekerella did—the entire book takes place during a con—its idea of love might seem a bit quick.

But developing a serious crush? That I can believe, and both romances feel like they’re off to an interesting start. I want more books (or fanfic, I’m not picky) detailing how these characters will grow after the events of Princess and the Fangirl, especially if that fic focuses on Jess and Harper.

More importantly, this book is an unabashed celebration of what fandom means to people. Harper gets several good quotes about the power of stories we love, and the power of representation through OTPs, that made me have to put the book down to dry some tears.

There are scenes with girls in cosplay that spoke to me on a powerful level as a cosplayer. Overall, this is a story about the healing power of community and how, while fandom can be terrible at times, it also possesses a power to connect us all.

If you’re not sold on the concept of fandom, this book might not be for you, but if you love fan culture, and love seeing it presented as how things should be, then definitely give this book a chance.

And, as always, look to the stars. Aim. Ignite.

Ashley PostonThe Princess and the Fangirl