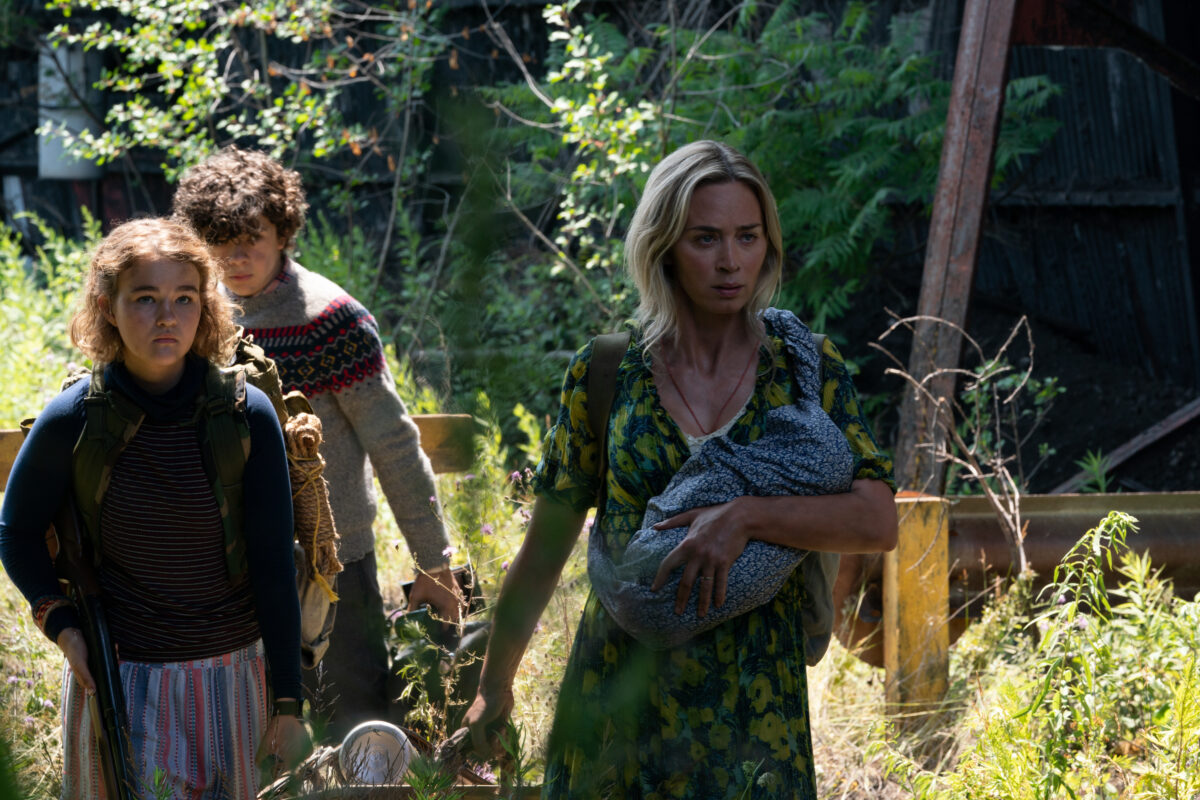 Is A Quiet Place Part II the best movie I’ve ever seen, or was I just thrilled to be back in a movie theater after 16 months? It’s a question I’ve been mulling over since viewing the film at a press screening earlier this week. As we cautiously emerge from quarantine, mundane activities like going to the movies are bathed in an exotic new light. And while the film was already completed well before March 2020, it’s impossible not to pick up on the myriad parallels between A Quiet Place Part II and our own quietly terrifying year in the pandemic.

But I’m getting ahead of myself. A Quiet Place Part II, written and directed by John Krasinski, follows the surviving members of the Abbott family as they search for a new home. In a stunning flashback opening sequence, we glimpse the small town that the Abbotts call home: Lee (Krasinski) picks up oranges for his son’s little league game, while Evelyn (Emily Blunt) encourages her nervous son from the sidelines. It’s a slice of idyllic Americana, until a flaming meteor burns through the sky and everything turns to chaos. In a nail-biting sequence, the Abbotts run through their town as the monsters descend and the world plunges into chaos.

The film then jumps to over a year later, picking up in the immediate aftermath of A Quiet Place. With their farm home on fire and their patriarch gone, Evelyn hits the sand-covered road barefoot with son Marcus (Noah Jupe), deaf daughter Regan (Millicent Simmonds) and a new baby in tow. The family stumbles upon a booby-trapped abandoned steel mill, where former friend Emmett (Cillian Murphy) is hiding out.

While Emmett wants the Abbotts gone, they urge him to help them find sanctuary. And when Regan goes on a solo mission to follow a mysterious radio signal, it is Emmett who goes after her. But he warns the family that the people left alive are not worth saving. It’s a theme frequently explored in the post-apocalyptic genre, that the threat of zombies/monsters/plague pales in comparison to man’s inhumanity to man. And many shows, like The Walking Dead, follow this thread to its grimmest conclusion.

But A Quiet Place Part II isn’t interested in the darkest possible outcome. The film has villains to be sure, but it instead focuses on the grains of optimism to be found in a desert of despair and hopelessness. If A Quiet Place was a metaphor for family and parenthood, then its follow-up expands that metaphor to the community. It asks what we expect of our friends and neighbors during a crisis, and what we owe to one another. It’s a prescient question, given our current debate over masks and vaccines. What are we willing to do to protect our community, and what befalls us when we only care about ourselves?

Like its predecessor, the film is packed with brilliant moments of tension, aided by its excellent sound mixing and design. Krasinski’s directing evokes the thrills and emotion of a Spielberg film, pulling from classics like Jaws and Jurassic Park to match the thrills with genuine emotional moments. It’s an effective combination that will likely have you jumping in your seat at some moments while crying during others.

A Quiet Place Part II expands on the world, bringing in new characters and new locations. It also splits up the action, focusing on Regan and Emmett’s journey while Evelyn, Marcus, and the baby hole up at the steel mill. If I have any complaints about the film, it’s that I wish we spent more time with Blunt, who stole the first film as a fierce mother protecting her family. But Simmonds ably handles her leading role with authenticity and emotion.

While A Quiet Place Part II revisits many of the beats of the original, it still offers a wildly entertaining movie-going experience that hits all the right buttons. And if you’re looking for that first film back in theaters, this is the one to see. This film is truly one that is meant to be seen on the big screen.

A Quiet Place Part II hits theaters May 28, 2021. It will then be available to stream on Paramount+ 45 days after its theatrical debut.