Oscar Isaac Believes Poe’s “Got a Lot of Love to Give,” We Melt Accordingly

In this excellent interview with Oscar Isaac, Isaac shared a little bit of insight into what it was like filming X-Men: Apocalypse. He also went into the shipping frenzy that’s been going on around Poe in Star Wars: Episode VIII. When it comes to his role in X-Men: Apocalypse, Isaac spoke about what it was like to play Apocalypse. “It’s a crazy, wild character,” he said. “I got to embody a lot of weird concepts, so that was a lot of fun.”

If you’ve followed Isaac’s career, then you also know that he’s worked with some of Hollywood’s biggest names: the Coen Brothers, J.J. Abrams, Zack Snyder, and (as of Episode VIII) Rian Johnson, and Isaac said that he feels lucky to be in the position he’s in. He echoed some sentiments that more than a few people feel about their situation when they’re privileged enough to be where they are: “It’s hard to believe sometimes. It’s a little bit scary because you feel like, this can’t… this can’t last.”

As for Episode VIII, Isaac said that he had just recorded a big stunt as Poe. That’s about all the detail he gave for what they’re currently shooting, and that’s to be expected, really. But the best part about their chat regarding Episode VIII came when Isaac answered a question regarding Poe’s romantic interests: “People love your character in Star Wars and the relationship that may or may not exist with other characters in the movie. How aware are you of that, what people are saying online?”

To which Isaac simply said: “Poe’s got a lot of love to give.” And then? And then! And then… the best part. He just looks over to the camera, cool as you can be, and casts the most smoldering look ever. Sorry, but… I died. Reduced to a giggling, blushing pile of fangirl goop. 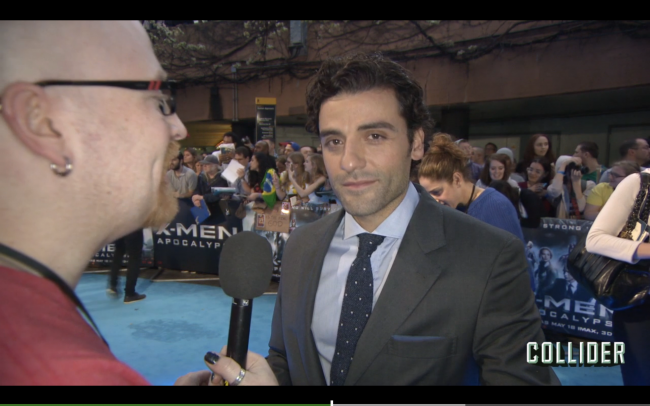