The 1960s were not exactly fun for women. Even in the sitcom realm, wives were at the home, and even when they were genies and witches, they were resigned to whatever their husbands wanted to do. Sure, there were some breaks in the mold, but for the most part, women were in the kitchen, and the men brought home the bacon.

In Marvel and Disney+’s WandaVision, we see Wanda Maximoff fitting into this sitcom world almost too perfectly, but the show doesn’t completely erase the fact that the sexism that existed. Instead, they have a fun commentary on it throughout the first two episodes. Let’s explore that.

**Spoilers for the first two episodes of WandaVision lie within**

Most of the 1960s was filled with strange “seduction” techniques, even though couples didn’t sleep in the same beds on television. I do not know how real-life situations worked; I was not alive. My idea of this era, like many others, is completely reliant on shows like I Love Lucy and The Dick Van Dyke Show, and trust me, childhood-me was very confused by the two-bed situation.

WandaVision has somehow mastered the art of playing in the sitcom space while still calling out the sexism that very much existed at the time and in these shows we hold so dear. Under the guise of Wanda and Vision being an “unusual” couple, the show lets their dynamic thrive by placing those sexist aspects on other couples or in the “commercials” that litter the episodes.

Agnes, a character that recalls I Love Lucy’s Ethel, still falls victim to the sexist ideas of the time period. Making jokes about how she’s a housewife, having a gourmet meal at the ready, and bringing “The Husband Issue” of a magazine to help Wanda prepare for an “anniversary” that neither Wanda nor Vision can remember, she’s an interesting look at tackling those archetypes in these shows. 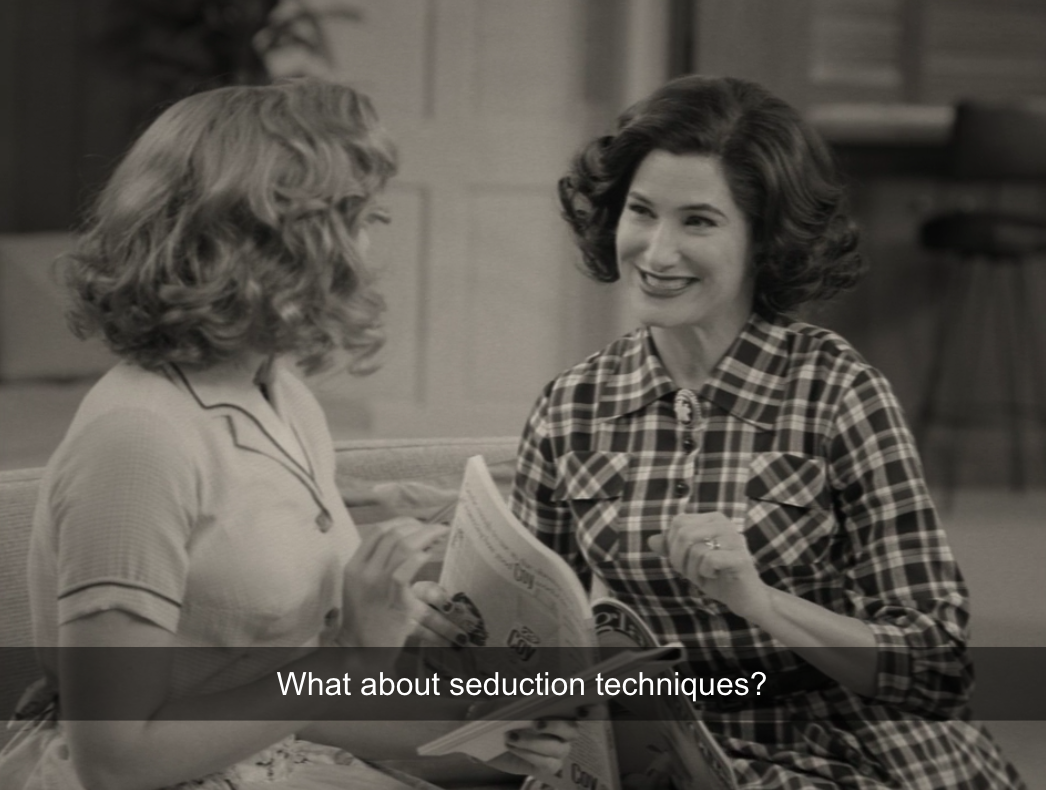 But even when WandaVision plays into it, they still have subtle jabs at the ideas that filled the shows of the ’60s and beyond. Women were taught to do things to get the attention of men. It was always about how you could change yourself for the man in your life, and not the other way around.

In the first episode, Wanda and Agnes discuss a seduction technique for Vision (who is already Wanda’s husband) and read that one such technique is to literally fall so a man can pick you up. 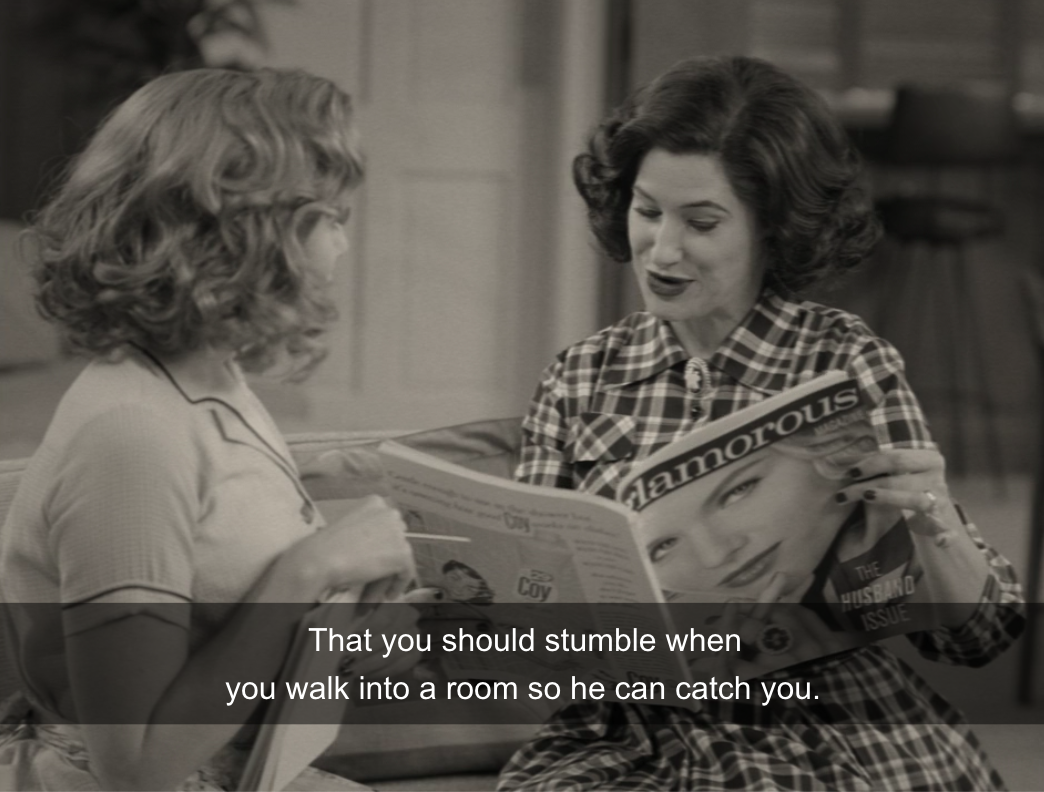 Sure, it’s a laugh now because none of us would fall into the arms of a man. (Well, not on purpose. I’m a klutz, so it could still happen.) The commercials, though, selling products to women to benefit their husbands? That’s where the show really drives home the time period sexism that very much existed.

It wasn’t really about what made a woman’s life easier. It was about her husband being happy with her work. 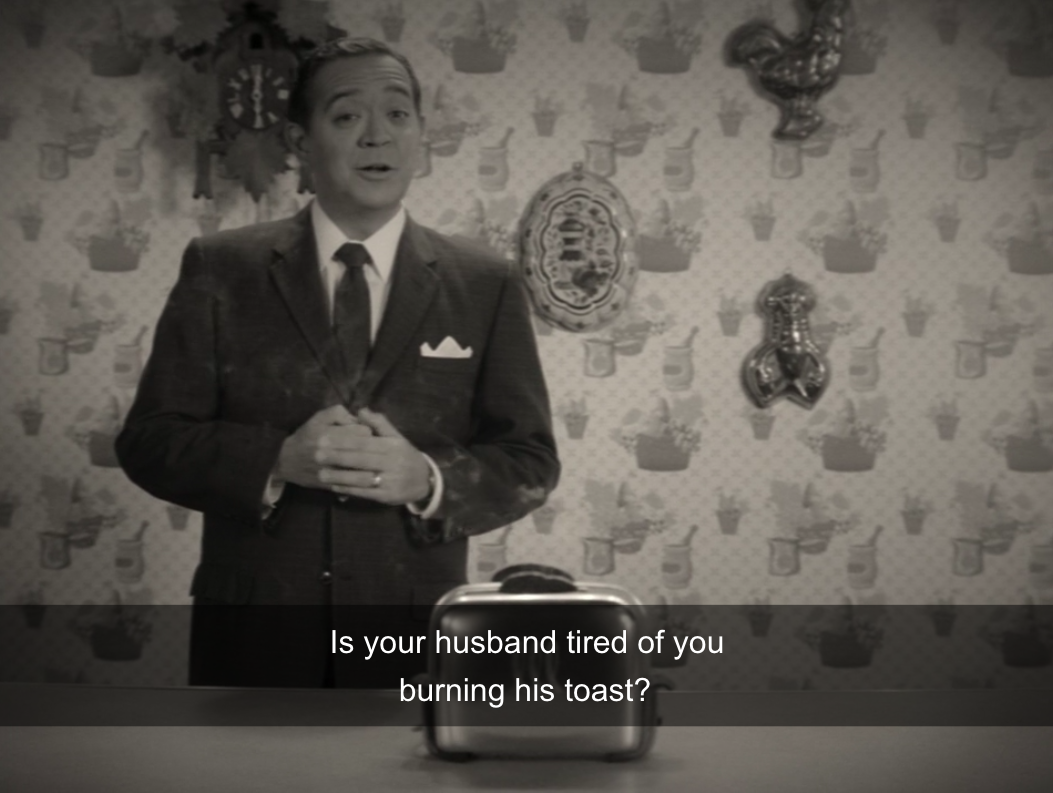 I will say, what is beautiful about WandaVision is that it’s never Vision who is used to show this sexism. His relationship with Wanda is balanced, nuanced, and a pretty even playing field. When Wanda is cooking and can’t figure out dinner, she and Vision switch places, and it reminds us of the fact that that’s how Wanda and Vision bonded in the first place.

In Captain America: Civil War, Vision is watching over Wanda for Tony, and he cooks for her, despite not eating himself—which is, sort of, the same problem they have in the first episode. 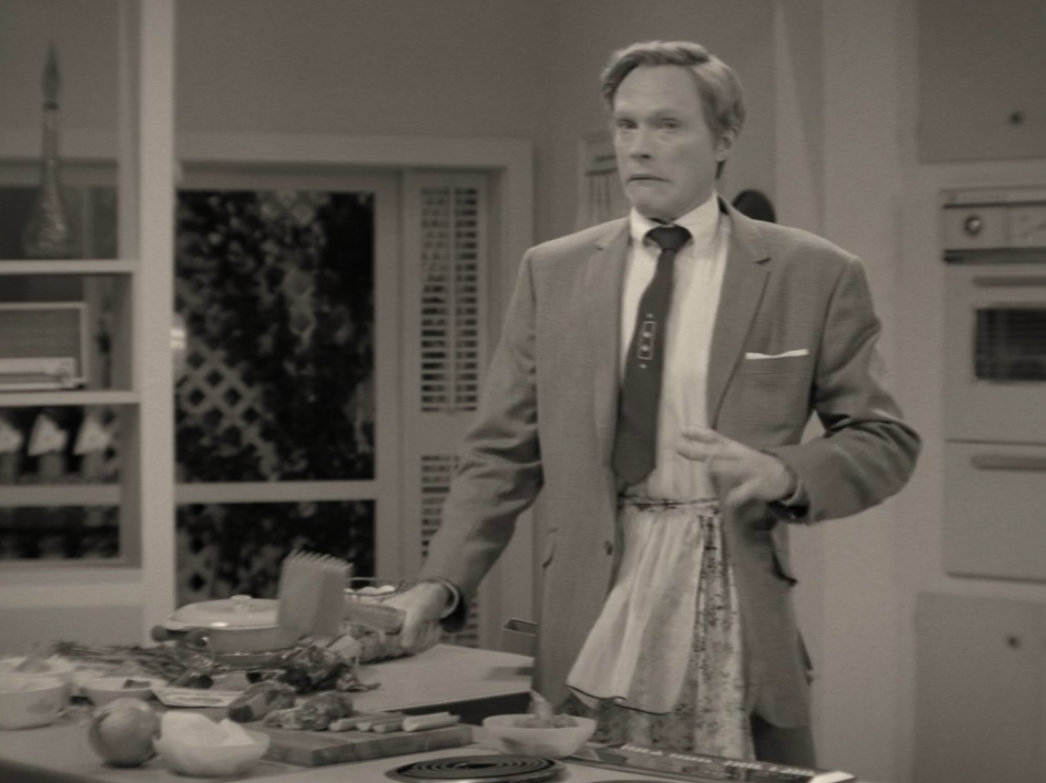 But the show doesn’t lean too much into that sexism itself. There are just little jabs at it, pointing out that it is absurd, and carrying on—especially since Wanda is in charge for the most part, even telling Vision what to do when his boss, Mr. Hart, is choking and on the verge of dying.

When Mr. Hart starts to choke, Vision looks to Wanda. Mrs. Hart is just repeating over and over to “stop it,” changing from laughing to all but begging, and no one moves until Wanda tells Vision to help. 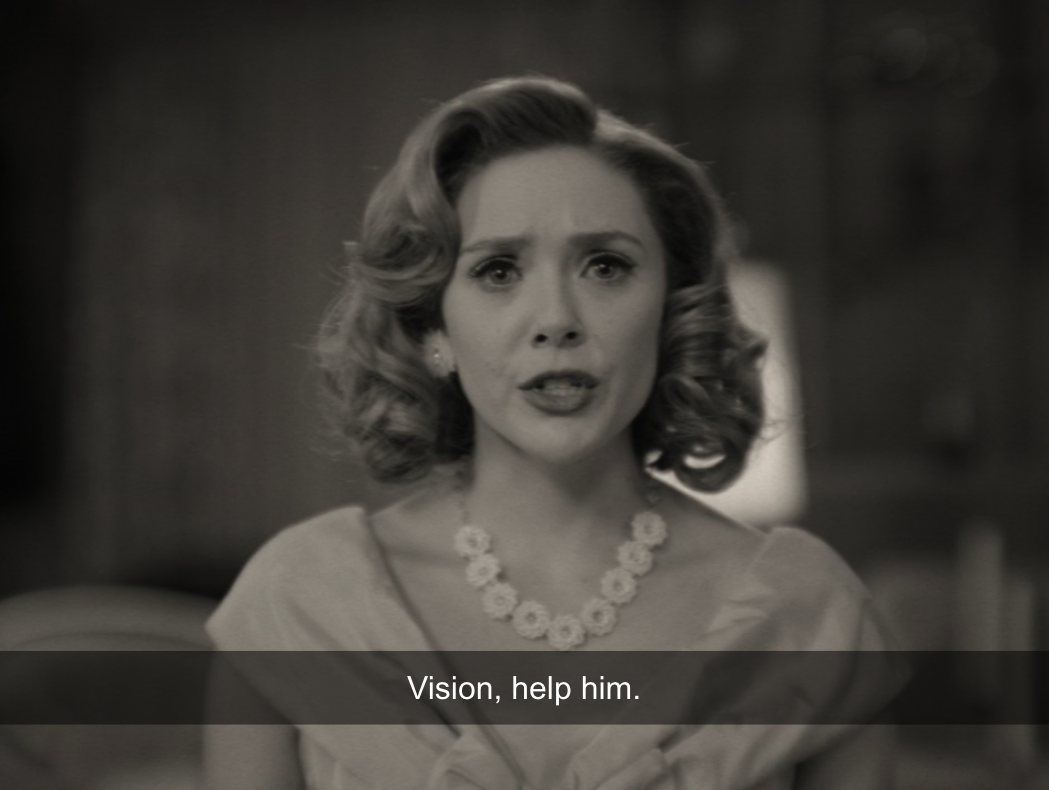 In the second episode, we meet Dottie (Emma Caulfield). She’s the kind of housewife that was always the “villain” of sitcoms—too perfect for the star, completely in love with her husband and her children. Dottie leads the planning committee meeting and seems as if she is going to be a character that leads into this sexism.

But, much like everything else in this show, her character is flipped on its head with one simple exchange. When a radio starts to call to Wanda, she is shocked still and snapped out of it only when a glass breaks in Dottie’s hand. Before leaving to tend to herself, Dottie asks Wanda a question about blood and white linen. 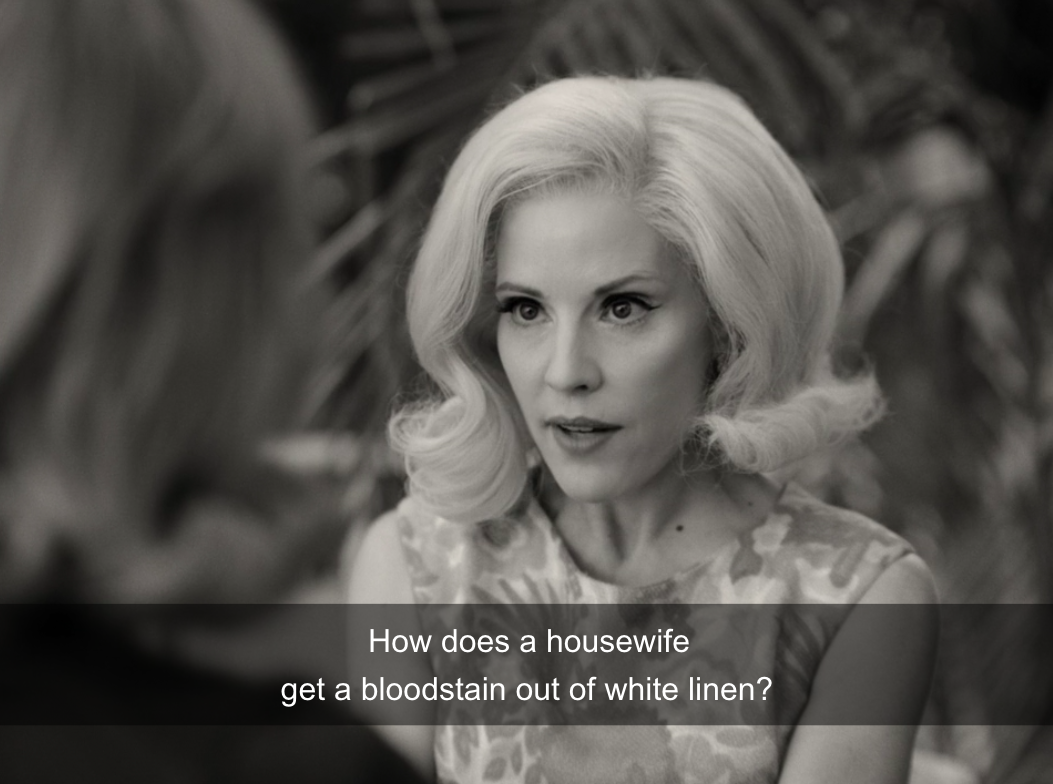 Expecting some kind of typical “housewife” response, I was shocked when Dottie said, “By doing it herself.” And it drove home, for me at least, that WandaVision wasn’t going to play into that aspect of sitcoms but wasn’t dismissing that it existed, either.

What I do love though is watching how the commercials tackle it, though. 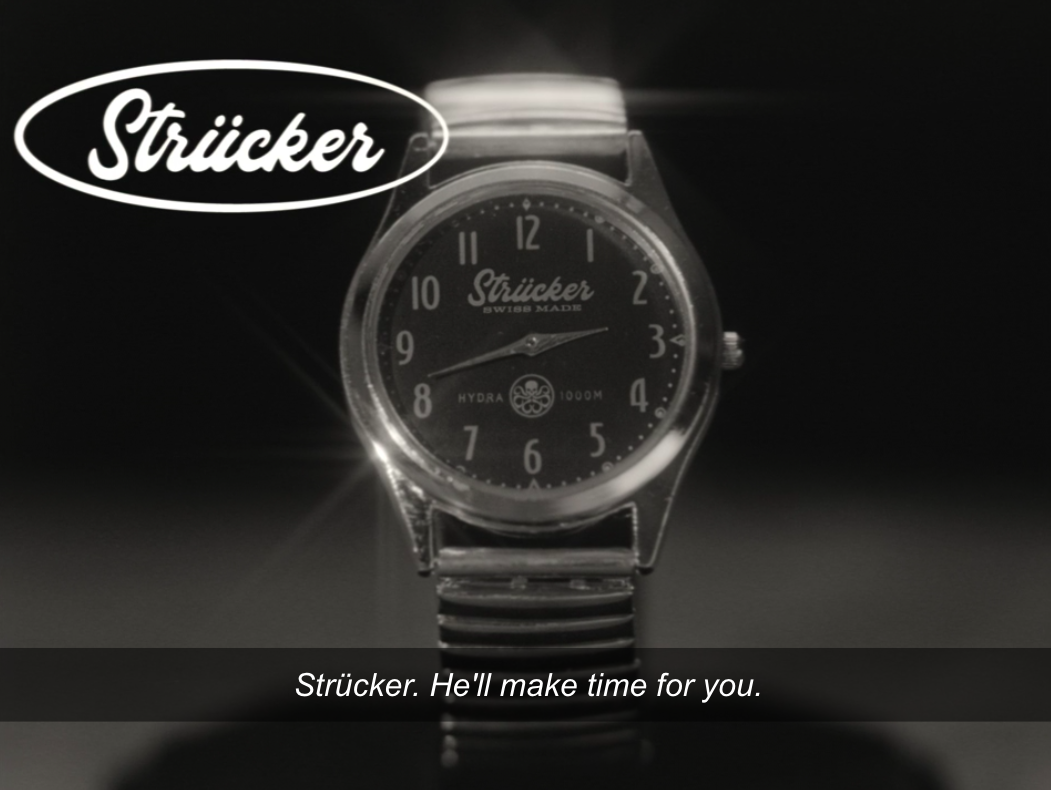 What WandaVision does is poke at these sexist narratives and, watching them in the modern era, drives home just how absolutely nonsensical they were back then. It’s always about the husband, always about what he needs, and juxtaposed with Wanda being the star of the show, plays beautifully into how far we’ve come (and where we still need to go) with how we explore our female characters on television (and stop the sexism).

At the end of the day, WandaVision is, for the most part, about Wanda Maximoff. 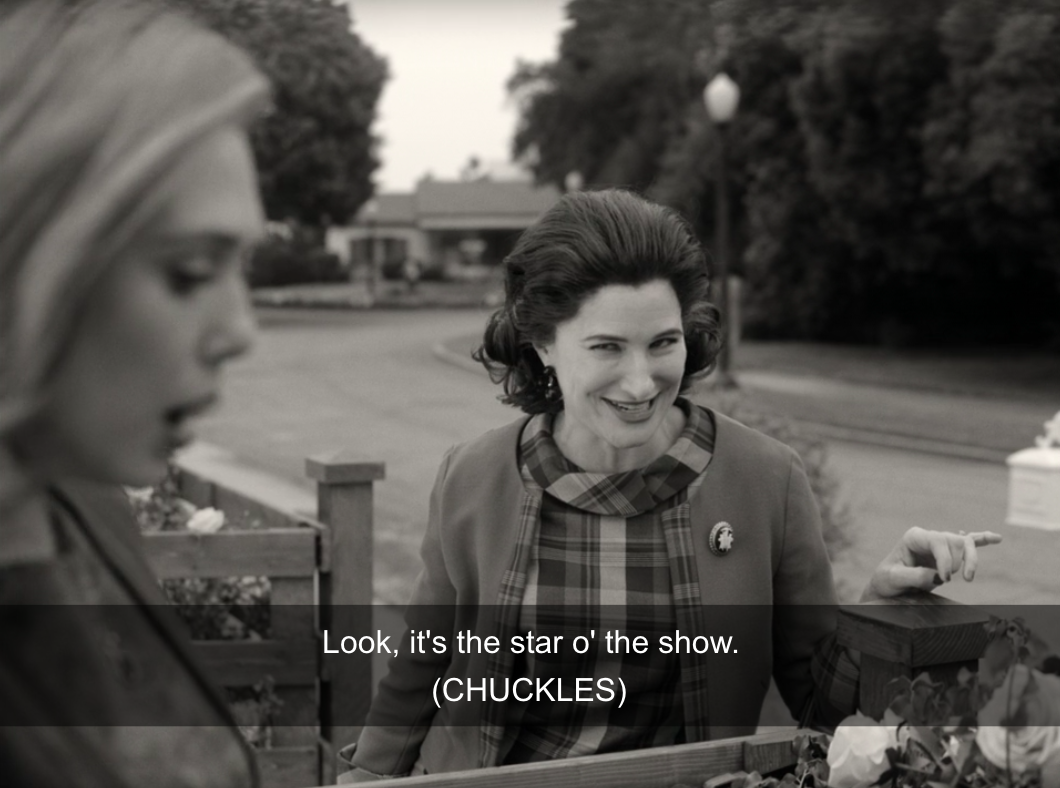 Personally, I hope they keep tackling these narratives in this way. They’re not exclusive to these kinds of sitcoms and, throughout the years, the way we approached the “mother” role has shifted, and so it will be fun to see how the show explores sexism in different eras.