Kristen Stewart Responds to the Public Determination to Out Her: ”Google me, I’m Not Hiding” 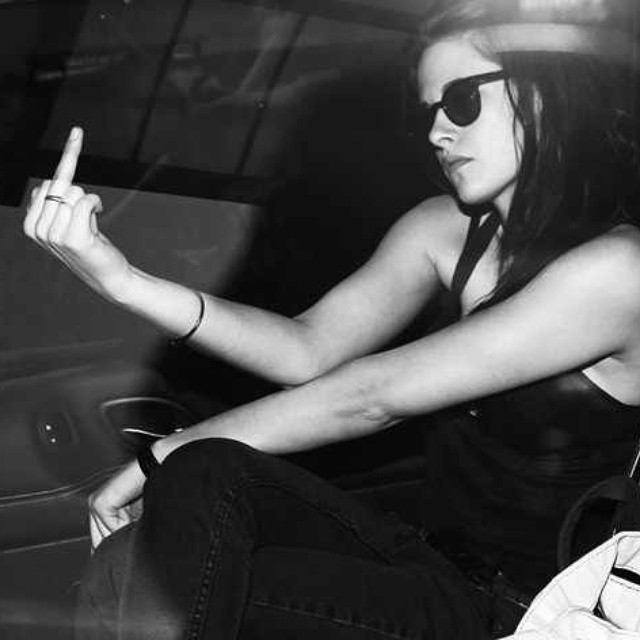 Kristen Stewart has made a habit of flipping the bird to tabloid reporters ever since she first began to hit the big time; it’s no secret that she prefers her privacy, and that she’d rather avoid public scrutiny altogether. So it should come as no surprise that she has delayed responding to the long-standing rumors about her sexuality for as long as possible, but in a recent Nylon interview, she finally offered a flippant answer: “Google me. I’m not hiding.”

Stewart went on to say,

If you feel like you really want to define yourself, and you have the ability to articulate those parameters and that in itself defines you, then do it. But I am an actress, man. I live in the fucking ambiguity of this life and I love it. I don’t feel like it would be true for me to be like, ‘I’m coming out!’ No, I do a job. Until I decide that I’m starting a foundation or that I have some perspective or opinion that other people should be receiving…I don’t. I’m just a kid making movies.

Stewart’s reluctance to assign a label to herself may frustrate some; I recall friends of mine expressing anger that celebrities like Anderson Cooper took so long to come out, for example, because they considered his delay to be an act of cowardice, whereas Cooper cited his desire for privacy as the reason. Some may believe that celebrities forfeit their right to privacy by virtue of the job they’ve chosen, and that it behooves celebrities who aren’t straight to use their visibility for good. On the other end of it, why pressure Stewart to assign a label to herself if she doesn’t want to claim one? (Her position is not so different from how I once felt in my youth, but the difference is that I didn’t grow up on camera, nor did I spend my early twenties harangued by paparazzi. In other words, the lack of scrutiny meant I could afford to take time in deciding how I saw myself.)

Stewart has already been forced to live her life in public, and she’s made it clear to the media for years that she doesn’t appreciate the overall lack of respect for her privacy and her life. Do we have a right to claim Stewart as a potential role model when she’s made it clear that’s not a role she wants to play? The commodification of celebrities and their identities feels like an impossible whirlwind of crap to me, personally, so it’s hard for me to feel entirely good about Kristen Stewart’s response here, especially given how much pressure I know she is under to have offered it. The “Google me” response feels like her sad acknowledgement of the endless scrutiny she has endured for a lifetime, rather than a bad-ass reclamation of the tabloid microscope.

But, hey, that’s just me. How do you feel about it?

(via The Daily Beast, image via Tumblr)