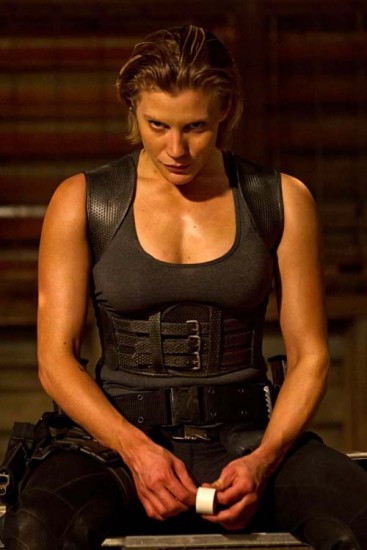 “I think the nerve-wracking part of it comes from being really one of the only women in the movie. There’s some other women in the movie, but they’re in the very, very, very beginning. There’s nobody to take focus off of me, if I’m not good. That was my biggest fear. There’s so many guys in the movie. They were all amazing. Every single one of those guys are phenomenal actors, and they really brought such life to their characters. But, when you’re the only woman in most of the movie, there’s a lot of pressure. If you’re not good, everyone is like, ‘Well, the girl sucked!’ It’s not like people can go, ‘Which one?’ The flipside of that is, if it succeeds, it’s the other side of that. This is, by far, the biggest movie I’ve ever done. I’m incredibly excited, but I’m also really scared. So, we’ll see.” – Battlestar Galactica actress Katee Sackoff speaking to Collider about her role in the upcoming Riddick film.

“I made a conscious effort to make her stronger than anyone I’ve ever played with very little, if no, vulnerability,” she said of her character Dahl. “She’s just really, really strong. If she has a vulnerability, you’re never going to see it.”

Sackhoff is also still attached to that lady Expendables-type film which she told them is still happening but slow moving at this point in the game.