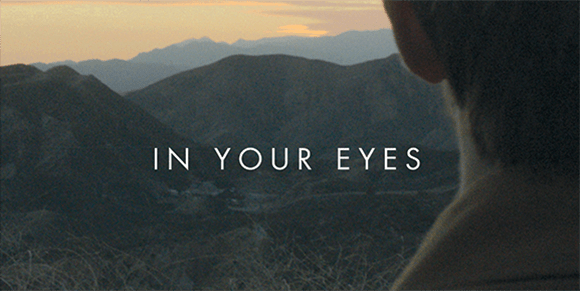 Were you intrigued by the clip we posted from In Your Eyes, described by co-star Zoe Kazan as what a Nicholas Sparks movie would look like if it were written by Joss Whedon? Were you sad that you probably wouldn’t be able to see it anytime soon? Good news! A day after its world premiere at the Tribeca Film Festival the film has been released online and is available to rent by anyone with a credit card and five available dollars.

Whedon, who wrote the film, announced to the world premiere’s audience via a surprise video that In Your Eyes would be available for immediate rental through Vimeo On Demand at InYourEyesMovie.com. Fork over $5 and you’ll have 72 hours in which to get your Whedon on.

The film is directed by Brin Hill and stars Zoe Kazan and Michael Stahl-David as polar opposites—she’s a soft-spoken doctor’s wife, he’s an ex-con—who share a paranormal connection, namely that they can see through each other’s eyes, or at least that’s what the clip made it look like. The official synopsis describes it as a “metaphysical romance.” Nikki Reed and Jennifer Grey, married to IRL Phil Coulson, co-star.

Via The Wrap, “At the Q&A that followed the Tribeca screening, producer Michael Roiff said it was also available on every site that rents films, and that it had been translated into five languages,” those being Spanish, French, Japanese, Portuguese, and German. “Roiff added, ‘From the get-go, we always wanted to do something different with it. We said, ‘Screw it — we made it for the audience, and we’re taking it straight to them.'” He continued:

“Because Joss has such a connection with his fans we figured this was an opportunity to try something we couldn’t with other films. The whole conversation that led to this was ‘what’s the craziest thing we can do? What can we say in the question and answer that would be really different?’”

God bless the Internet. Sounds like Joss really wants you to be able to watch his new film. Will you oblige him? Here, I’ll get you in the mood: