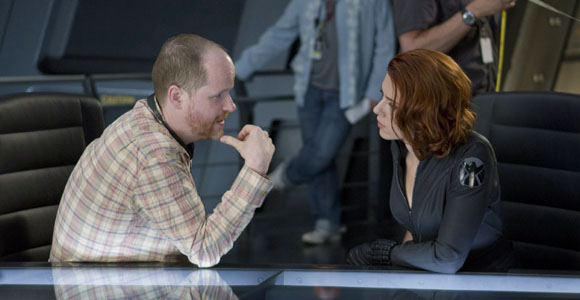 Joss Whedon has been at the helm of several projects featuring strong women and it’s likely he won’t end the trend anytime soon. The director recently spoke about women’s rights issues at an Equality Now event which he also wrote several skits and monologues for. The event took place in the middle of the media blitz for his latest effort, the Marvel superhero flick, The Avengers. Well, we’ve also learned today that DC and Marvel will clash in theaters when the movie hits screens because a new trailer for The Dark Knight Rises will premiere before each showing. This may be too much awesome to handle.

Ok, first thing’s first. This won’t be the first time a DC film will air its trailer before a Marvel one but it’s certainly big news regardless. Collider reports that a third Dark Knight Rises trailer will premiere in front of The Avengers prints starting May 4. Frankly, this is a no-brainer. Not like it’s going to convince anyone watching The Avengers to see TDKR who weren’t already going to but it’s certainly their prime audience. And well, it just makes for twice the fun.

And in case you forgot, the last time we had a TDKR trailer was in December which means I’m foaming at the mouth.

In other news, I really wish I had been able to attend this Equality Now event with Whedon. The Hollywood Reporter writes:

While his superstar cast of heroes premiered their film in London — where Whedon spent many of the formative years of his life — he was performing a monologue and looking on as stars such as Eliza Dushku and Laura Linney performed speeches and skits he had written.

They were on very serious subjects — Dushku played an undocumented immigrant forced into prostitution, Linney spoke about female genital mutilation, and Daphne Zuniga did a sketch about the war on women — but they all came with Whedon’s twist of dark, metaphorical humor.

Whedon said it was very hard to relate such serious messages with comedy but also easy at the same time. “Because to me, there is no logic of any kind behind misogyny. Therefore, it’s funny, because it’s so completely random to me. It’s senseless,” he said. “And believe me, there were some jokes that were cut. Some people were just not willing to say. And I get that. But it’s also a situation where people who do this work, who live these stories, they like to laugh. They’ve been through it, they’re not afraid of the subject, and they could use an evening of entertainment as well as education.”

While speaking with THR, Whedon also mentioned that strong female characters are still a rarity in Hollywood. “I think they’ve been peripheral for a long time, and I think The Hunger Games is about to change that in a big way,” he said. “I really like it; it’s my kind of thing. And more important, I like what it’s doing, which is millions.”

(via The Hollywood Reporter and Collider)