The Avengers Actors Read Very Mean Tweets About Themselves

The Avengers assembled on Jimmy Kimmel Live to recite some unfortunate observations about them from the Internet.

In Kimmel’s long-running segment, celebrities read not-so-nice tweets about them scraped up from the depths of the twitterverse. While everyone is game here, since most of the tweets concern the actors’ appearances, I don’t necessarily find this go-round super-hilarious. These folks might be rich and famous movie stars, but no one needs to read how a stranger thinks they’re ugly. Are there really not better tweets to be found?

We know there are, because some of the other observations are much funnier and in good fun. Samuel L. Jackson does remind one of a snapping turtle in certain lights. 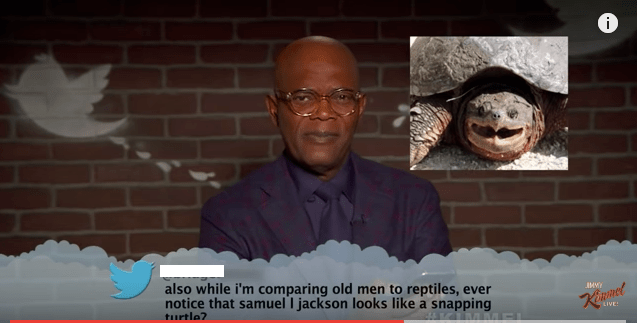 The gang is all here, with almost everyone from the MCU taking part, save high king Robert Downey Jr., who likely had something better to do, current purple villain Josh Brolin, and our patron saints Danai Gurira and Letitia Wright. (Jeremy Renner’s whereabouts are unknown.) 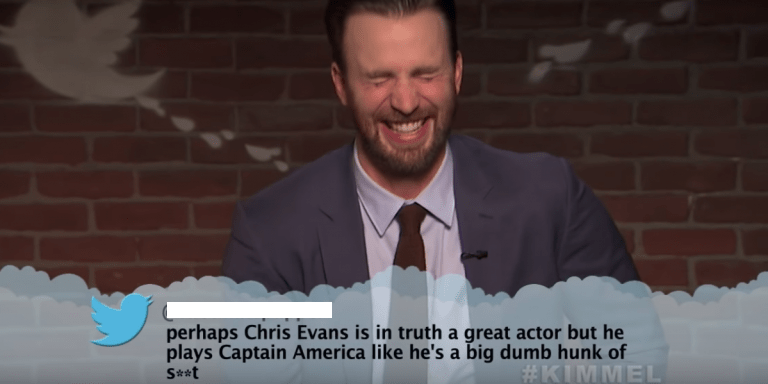 In case you can’t watch video at the moment, here are a few of the highlights, with some observations of my own.

No one thinks this is more hilarious than Chadwick Boseman.

Tom Holland is too precious for this earth. Protect him at all costs.

The most beautiful potato in existence.

Quick question, OP: HOW DARE YOU?

Are we looking at the same man, random salty twitter user? Do we have the same glorious man before us?

Our own Vivian Kane pointed out that the tweet selected for Scarlett Johannson was an odd choice. It’s actually part of a thread criticizing the whitewashed casting of Johannson in Ghost in the Shell. The twitter user’s comment here is in response to a tweet quoting a story that says, “Asians are a challenge to cast because most casting directors feel they’re not very expressive.” They’re pushing back on the idea that Johannson could possibly have been any more “expressive” than an Asian actor.

The original tweet they were responding to is this one:

Since the Avengers reading mean tweets is currently the #1 trending video on YouTube, the featured twitter users are getting some blowback, including the writer of the tweet about Johannson. They’re handling it with aplomb.

yall really need to understand the context of this tweet though, which, funnily enough, they didnt include so https://t.co/qPqwBLsOJb

anyway where are my loki, doctor strange, and vision thotties

Especially since the Internet is full of cruelty.

yall really taking this so personally ? at the end of the day, scarjo is still a rich privileged white who probably lost no sleep over that tweet but yall rly acting like i personally murdered your families pic.twitter.com/mV6qQiWPql

jimmy kimmel better pay off my therapy after this

yall can keep losing your shit over my tweet but im going to Enjoy my night pic.twitter.com/sdjR3sBLnR

I admire this user’s fortitude, but going forward, Kimmel and his team should blur the username unless someone specifically asks to be named. Anything less is hugely irresponsible, considering the show’s reach and the magnitude of the star power here.