How Thor Set Up the Cosmic MCU After the smash success of Thor: Ragnarok and the massive popularity of the character in both Infinity War and Endgame, it’s fun to remember how Thor used to be a gamble for the MCU. One of my favorite images on the Internet is a screencap of an article on the casting of Chris Hemsworth and Tom Hiddleston that implies that they’re not the best choices for the roles. Retweet it for good luck. 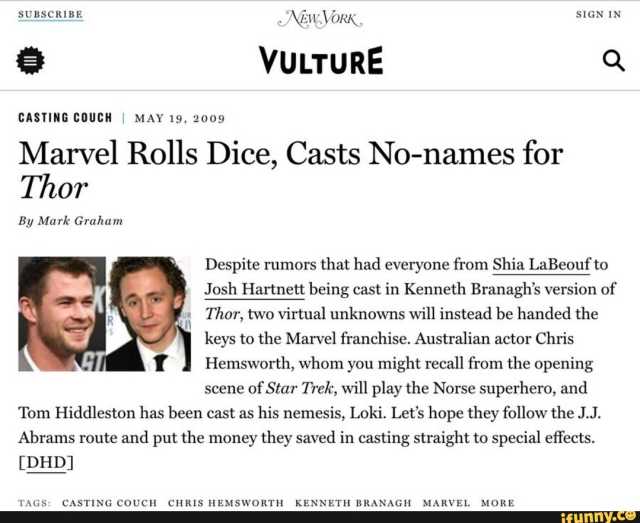 But Marvel always knew how important Thor would be to the overall MCU. Kenneth Branaugh, the director of Thor, told Yahoo Entertainment, “I was aware that Kevin Feige really knew that Thor was critical. This new dimension … the space adventure needed to find its starting place. There was real concern around that. They felt that if they didn’t get that one right, it was going to be really, really difficult for the expansion of that tone across the rest of what they planned.”

After Avengers: Endgame, where a talking raccoon is a prominent character and the film leans heavily into timey-wimey comic book shenanigans, the world seems adjusted to weirdness in their comic book movies. But back in Ye Olde 2011, people tended to think superhero movies were good if they were grounded in reality. Fantastic Four had bombed, and critics and fans loved the more earthbound, realistic adventures of Batman in The Dark Knight and Tony Stark in Iron Man. A film about a space-dwelling Norse god who flies around via hammer? That’s pushing the envelope.

But Feige was right. Without Thor, the MCU wouldn’t have the base of which to build off of for their wilder adventures. Thanos, the Infinity Stones, the Guardians, even now the Eternals … all of this is based around Thor kicking ass in 2011. If they hadn’t done Thor right, they would have had a struggle selling other cosmic adventures.

The first Thor isn’t topping anyone’s “best of” list, but it’s an excellent doorway to the MCU’s cosmic side. The film plays it more as a fish out of water comedy, though it invites us to laugh with Thor rather than at him. Hemsworth is charming and heroic, the film manages to not be overly sexist, and Hiddleston hams it up as one of the MCU’s best villains. Branaugh tries to frame the film as a comic book with multiple Dutch angles in shots, and the film is brightly colored and fun.

Most importantly, audiences didn’t reject the cosmic elements, which therefore allowed the MCU to break from being grounded and lean heavily into fantasy. We couldn’t have that stellar shot of the portals opening up in Endgame without Thor opening the door with a blend of magic and science. Thor is now running off with the Guardians and (hopefully) ushering in more cosmic adventures; Captain Marvel and The Eternals also, in turn, allow for space mayhem.

The MCU wouldn’t be what it is without breaking from the tradition of “realistic” superhero movies and wholeheartedly embracing the weirdest elements of comic book lore. Thor was the perfect gateway to the weirder elements of Marvel. Feige and Branaugh were right: if Thor had failed, it would’ve been a struggle to sell the more cosmic elements of the MCU. Thank goodness it didn’t.