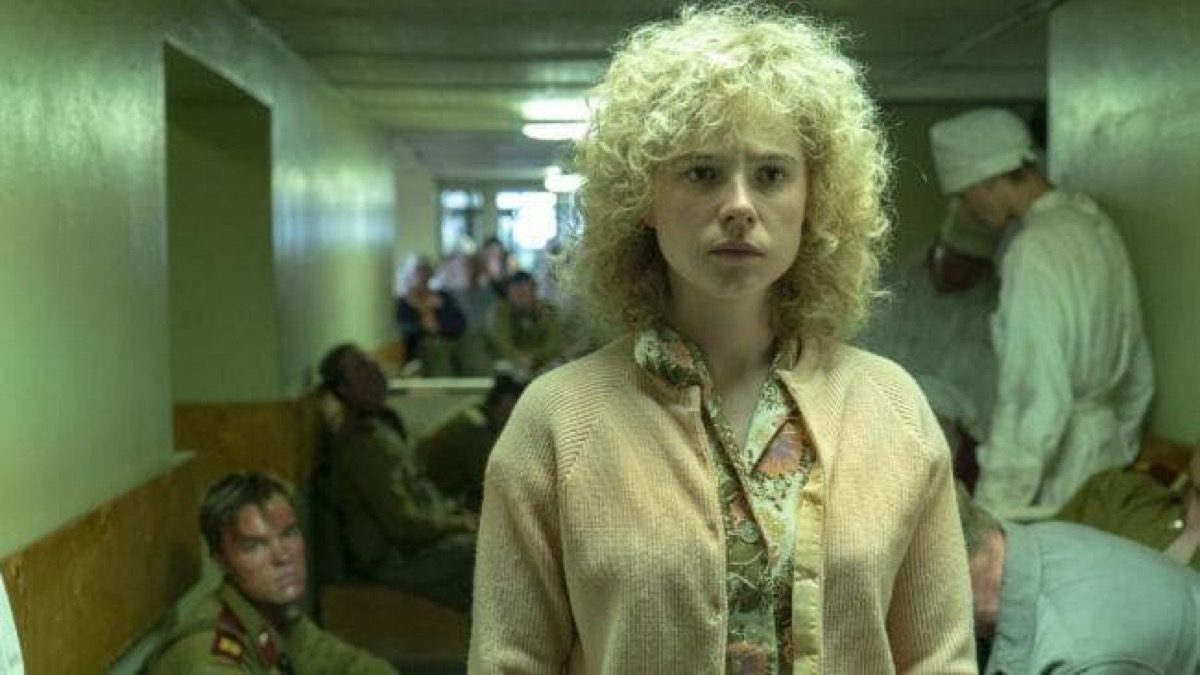 HBO’s Chernobyl, a historical fiction miniseries of the ’80s nuclear disaster, is a show that I needed to process immediately through messaging the hot guy who told me I should watch it because he thought I’d like it based on my unhealthy obsession with horror (my words, not his). I asked, “Is it horror?”

“But a nuclear power plant exploded. For real. Doesn’t that make it MORE horror? The truthiness?”

He was right. I was also right. Jared Harris (who plays Valery Legasov) tweeted that Chernobyl is “History, not horror. But oh, the horrors unleashed by liars, & the destruction they bring. A timely lesson to reflect upon.”

The visceral experience is the most immediate source of horror in the show. Viewers experience it as dosimeters’ clicks accelerate and then die, through the radiation burns that are mistreated with milk at the hospital (an old folk remedy that does not work, not even on regular burns). Nurses’ hands sear as they dispose of contaminated fire-retardant clothing. Wounds appear to heal during a brief latency period. After a long enough exposure, cellular deconstruction occurs, ending when the veins and arteries disintegrating so that “you can’t even administer morphine for the pain, which is unimaginable.”

The understated yet still graphic repercussions of the “impossible” nuclear core explosion, the melting off of the senior engineers’ faces, their labored breathing, the risking of so many people’s lives in damage control, Legasov’s unignorable suicide … all of those images and realities are harrowing, but the most compelling, at least to me, was the Sword of Damocles introduced in the first of the chronological scenes.

We see the explosion at Chernobyl from the perspective of Lyudmilla Ignatenko (Jessie Buckley) as she finishes vomiting in the middle of the night. We are meant to deduce immediately that she is pregnant. I felt my heart do its first elevator drop at that realization, and I flashed back to ninth grade, sitting in my world history class, staring at the single paragraph on the event, dolly-zooming in on the phrase “birth defects.” I could not think about anything else, and it was VERY hard for me to actually wait to see what happened.

According to our protagonist, Valery Legasov, anyone who was exposed to Chernobyl’s radiation would have cancer within five years, and in the epilogue of the show’s finale, we learn that cancer rates did, in fact, spike among people near the Exclusion Zone at Chernobyl. The main spike in cancer rates was among children.

The viewers hear the explosion seconds after we see it, and Vasily Ignatenko (Adam Nagaitis), Lyudmilla’s husband and a firefighter, suits up. She protests, “But it doesn’t look right, the color. And what if there are chemicals?” and tries to convince him not to go, as would anyone who thought their spouse was in danger. 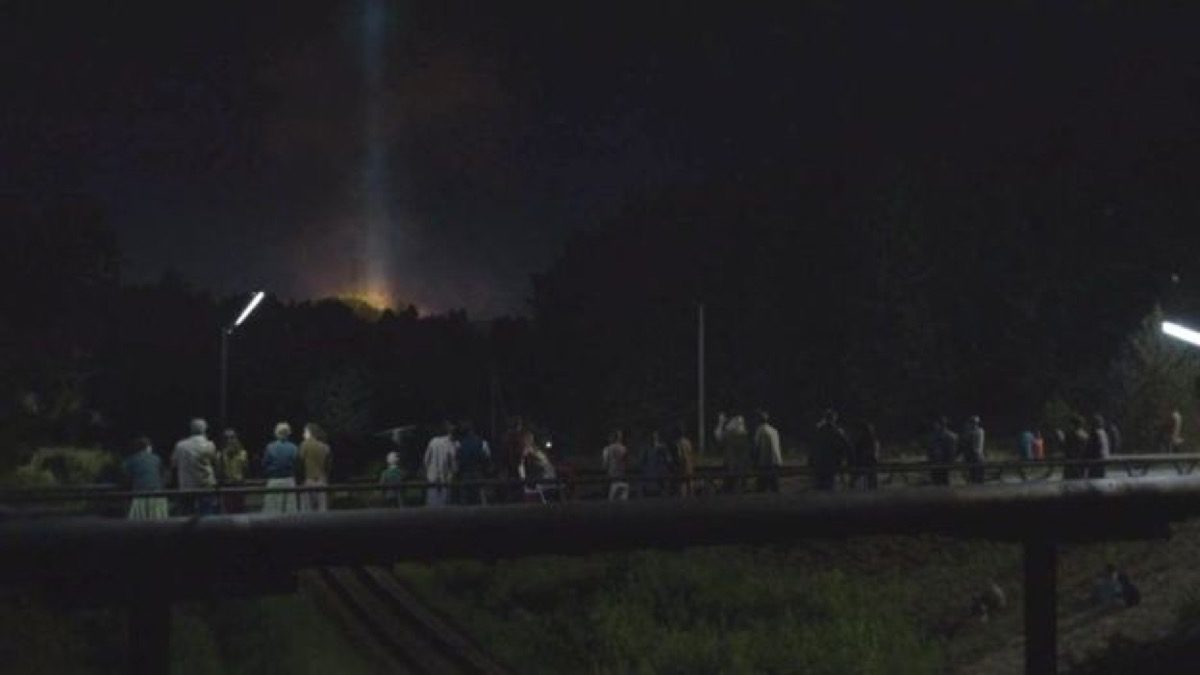 When her neighbors congregate on a bridge to watch the plant burn/explode, Lyudmilla does not follow them, saying, “It could be dangerous.”

When her husband gets relocated to Moscow for treatment for his inevitable radiation exposure from fighting the fire, she bribes the nurses to let her see him. She sits with him while he screams, talks to him as he goes blind, holds his hand as his body rots around him, and she refuses to leave while he dies. She does everything a dutiful wife would be expected do.

No matter what she does, she has made the wrong decision, and that, in the true horrorshow of Chernobyl, is what stood out to me most. I literally could not get it out of my mind even as the flesh on the firefighters’ hands blisters open and Dyatlov (Paul Ritter) pukes onto the board room table. EXCUSE ME. WHAT IS GOING ON WITH HER BABY?

You may be thinking, “This girl is just preoccupied.” Maybe, but also consider how many arguments have arisen in the weeks since Chernobyl ended, stating that its point or agenda is to emphasize the danger of government secrecy—an argument I think is totally valid—or the concept that humans are destroying the earth, and that this show is a metaphor for global warming as generational sabotage. Also valid.

Could it not be that this story ALSO argues that the decisions of a few power-hungry men are affecting the bodies and decisions of women, and thereby sabotaging the coming generations? And that this, like many women’s issues, has been somewhat sidestepped? 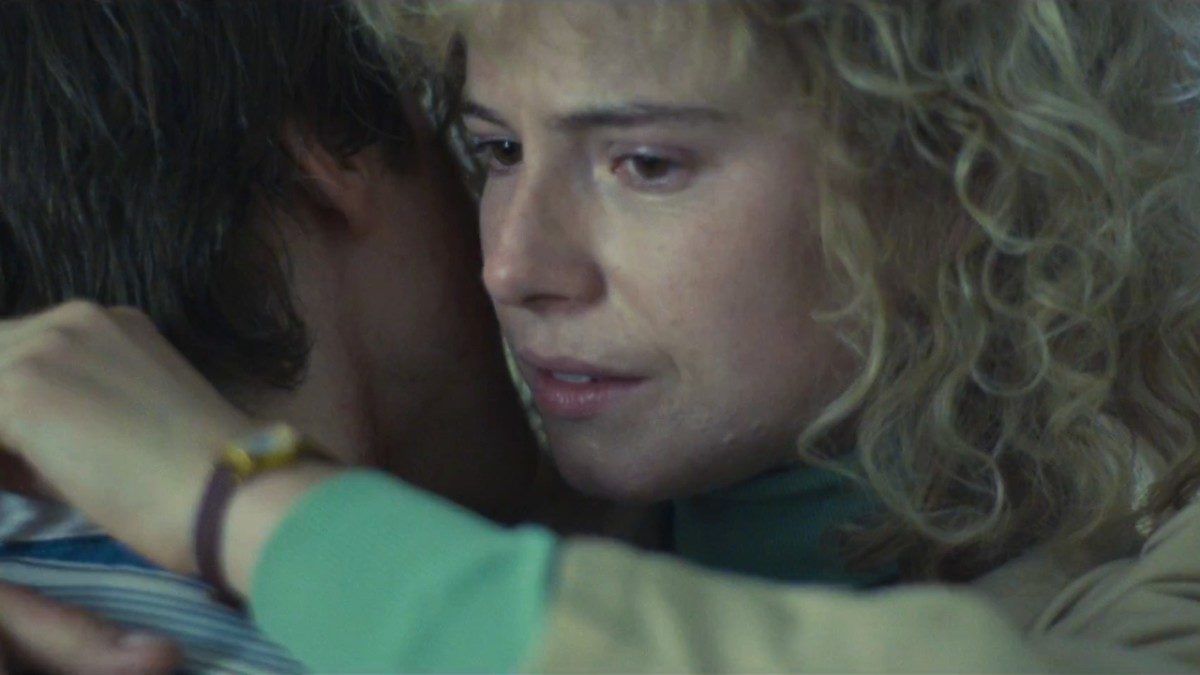 You may be thinking, “Okay, but that’s just one character and one example.” It’s true that she’s the main character whom we see affected, but she is not alone. In fact, I think that more than horror, Chernobyl has earned the label of terror. Everything we see is scary, but if your experience of the show was anything like mine, I was far more scared by what was GOING to happen than what already had, which is a product of excellent storytelling.

The entire season foreshadows what will come. At the end of episode 1, “1:23:45,” a bird flutters, dying, to the ground among children walking to school. In the hospital, Lyudmilla sees her neighbors, and they beg her to take their child, who wails from the radiation that burned her on the bridge, while they watched and she lay in her stroller. Children all the way in Germany are not allowed to play outside, yet the Soviet children play on, unaware, in Pripyat.

The end of episode 4 is when we learn the fate of Lyudmilla’s baby, and it’s narrated by another woman, the woman scientist Ulana Khomyuk (Emily Watson), who told her not to see her husband. In the previous episode, Khomyuk explains, too late, that radiation is contagious, and rather than believe her, Lyudmilla, of course, defends her actions, and she continues to do what she believes is right. Who among us could abandon a spouse as they turned into a living corpse before our eyes?

In spite of doing everything “right,” Lyudmilla’s baby only lives for four hours. Khomyuk explains that the baby absorbed all the radiation, instead of Lyudmilla. We see only Lyudmilla staring at a closed curtain, an empty crib behind her. This comes at the end of the episode entitled, “The Happiness of All Mankind.” The title is obviously ironic, but she is excluded on every level. She is now a childless widow, and it is not a coincidence that the banner’s translation does not say “humankind.”

I’m not saying that Chernobyl has a feminist agenda, or that the main takeaway is a women’s rights issue. I’m only saying that I haven’t heard anyone mention the distinctly feminine terror, and to many women, pregnancy is terrifying not because of its undeniable body horror; it’s terrifying because even if you do everything right, factors which you have no control over can affect the life of your child. You can’t protect them. Not even if you do everything right.

Mary Kay is a belly-dancer, horror enthusiast, sideshow lover, prose writer, Christian, and literature professor from south of Atlanta. She is currently writing a nonfiction novel about Queen of Policy gangster, Madame Stephanie St. Clair, but you can hear her analysis (and jokes) about scary movies on her blog and the podcast she co-founded, Everything Trying to Kill You. She can be reached at [email protected]