Please Let Me Be Wrong About These Ghostbusters 3 Character Breakdowns

Jason Reitman, son of Ivan, will be directing Ghostbusters 3, set in the continuity universe of the first two movies. This time around, rather than focusing on snarky men in Manhattan, this movie features four young teenagers bustin’ ghosts in a small town. The apparent character breakdowns of the kids are not great at first glance.

CBR reports on these breakdowns, which come courtesy of the site HN Entertainment:

UNNAMED (LEAD BOY 1): To play 13 years old. A conspiracy theorist who is very into fantasy.

UNNAMED (LEAD GIRL 1): To play 12 years old. A science kid that has trouble connecting with others on an emotional level, has difficulty understanding feelings and is not aware of how hurtful her comments can be at times.

There’s a lot to unpack here. I feel like I have to start with LEAD BOY 2, who just may be the protagonist of this story. He gets a ton of detailed character-related adjectives, and he’s the only character to come with a firmly pre-established physical description.

While casting for the other kids might be open to a diversity of race and body type, that doesn’t seem to be the case for the LEAD BOY 2. He’s already quite clearly envisioned. My first thought when I read this description was that it sounded an awful lot like Stranger Things‘ Finn Wolfhard, who plays Mike Wheeler. I have a handy visual on what LEAD BOY 2 could look like: 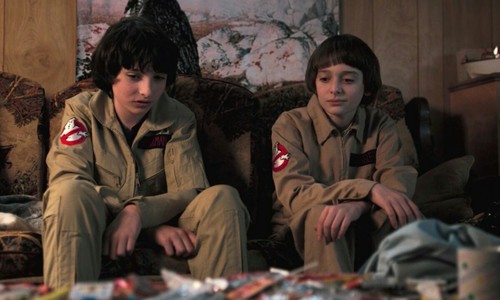 Moving right along from our brilliant, withdrawn yet playful, problem-solving prodigiously pale guy, it’s hard to feel like the rest of the kids aren’t being cast in pretty stereotypical molds. The girls in particular strike me as a Velma and Daphne redux from Scooby Doo: the clever “science kid” girl is clinically removed from her emotions, while LEAD GIRL 2, the fun one, is “a bit of an airhead.”

It was this description that really made me pause; I haven’t seen anyone described as an airhead in decades, and it’s not fun at all to see that applied to a 13-year-old girl character for purposes of casting. Oh yes, we also have “dazed.” Who wants to bet that she’s also cast as classically pretty, and that LEAD BOY 2 or LEAD BOY 1 has an awkward crush on her? (If science girl has a crush on her, all will be forgiven.)

Then we arrive at LEAD BOY 1, “A conspiracy theorist who is very into fantasy.” If this isn’t handled with grace, he unfortunately could turn out to be a wacky “nerd” character who says eye-rolling things about ghost dragons until they turn out to be true.

Here’s the thing about LEAD BOY 1: I already like him. I understand him. I was him. So wouldn’t it be exciting if LEAD BOY 1 and LEAD GIRL 2 switched genders? Why can’t we have a conspiracy theorist fantasy nerd girl and a charmingly dazed boy? To that end, why can’t we have a girl who’s the brilliantly quick-thinking problem-solver under pressure, and the boy as the science kid who has to come to grips with the emotional ramifications of his actions?

I’d like to trust Jason Reitman, who directed movies like Juno and Young Adult, not to allow these kids to be the stereotypes they appear at first glance. But Ghostbusters 3 will be much bigger in scope and budget—and commercial expectations—than anything he’s worked on before. This, coupled with the backlash that Paul Feig’s female-led Ghostbusters faced from fans of the original movies, leads me to worry that this film could be returning to more traditional, well-trod tropes.

I could be wrong in my assumptions here, and I hope that I am. Previously, HN Entertainment had speculated that the “science kid” girl might be the lead role (this was before the piercing blue-eyed boy’s character breakdown was released). There’s the real possibility of exploring a new kind of girl hero in our science kid; an audition tape has her character saying, “I’m not a machine, I just don’t pick up on traditional social cues.” Other dialogue reported from that audition tape suggests that she’s the new person in town, which means the focus could be on her. It also means she could be the daughter of one of the legacy ghostbusters. Considering that is heartening, but these other breakdowns threw me for a bit of a loop.

I want the best for Ghostbusters 3. I think there’s a lot of potential here to tell a different kind of story. Even if we’ve had a lot of small-town teens dealing with the paranormal as of late in media, there’s hardly a cap on audience excitement for such things. All I ask is that Ghostbusters 3 show that we’ve evolved character-wise from Ghostbusters in 1984, where the true bad guy was the Environmental Protection Agency.