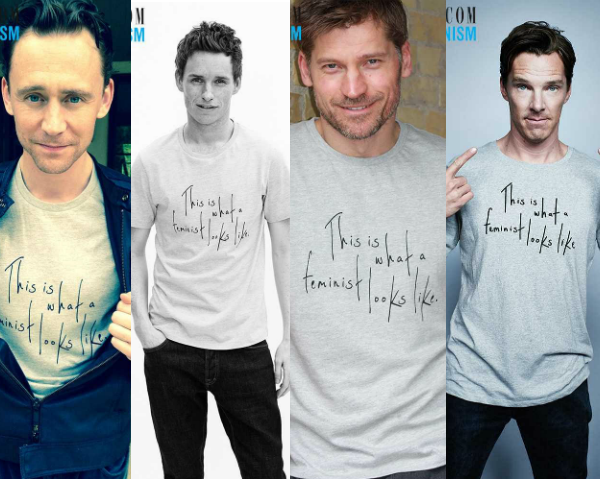 Several years ago, I made the conscious decision to be more outspoken when it comes to being a feminist (or feminist ally, if you prefer). My wife and I were teaching at a small Baptist college in the south, and some of my students (and, honestly, colleagues) regarded our marriage with suspicion. Why did we have different last names, one male student wanted to know? When I replied that it was because my wife liked her last name and I had no strong feelings on the subject, he grinned and replied, “Yeah, just as long as dinner is on the table every night, right?” The idea that a man might be considerate of and respectful towards his wife’s opinions and desires was completely foreign to him, I came to believe, because it was never modeled for him by the other men in his life. So, I reasoned, maybe I should try to do that.

I will say, though, that even as I endeavored to live my feminist convictions, I was awfully self-conscious about it. It’s probably not hard to understand why—a lot of men claiming to be feminist come across as, well, total assholes. Not all of them, of course, but how many times have we read articles with headlines like, “Now That I’m a Dad to a Little Girl, I Kinda Regret My Decades of Misogyny?” The guy who writes such an article tends to be simultaneously smug and clueless. What’s more, as Kat Stoeffel wrote, “Many men seem to reach for the ‘feminist’ label first to shore up their sensitive-dude bona fides and, second, to get a little female validation.” Even men who think they’re well-intentioned can bungle things (think of Mike Daisey’s appropriation of the #yesallwomen hashtag for his monologue about misogyny and patriarchy), and the fact that “Macktivism” is now a thing reminds us that we can often be suspicious of dudes who proclaim that they’re down with the struggle.

Perhaps most important is my awareness that every word I write or speak aloud is amplified by a privilege I didn’t ask for and don’t deserve. I am a white heterosexual man, and in my culture that’s an identity that comes with a whole lot of power. We tend to write the laws. We’re found lecturing in classrooms and calling the shots in boardrooms. And when we speak, people tend to listen—whether what we’re saying is worth listening to or not. I would like to live in a world where this is not the case, but I don’t, and using my voice to talk about sexism and feminism is still an exercise of privilege that I didn’t actually earn through any work or talent on my part. I shouldn’t have this privilege—what right do I have to use it when there are so many women, smarter than me and with more first-hand experience with misogyny, who are left unheard?

Still, I don’t think silence is really an option. The fact that some men will listen to me and not Jessica Valenti or Roxane Gay is terrible, but I don’t see this reality changing until these men get the message from other men. It’s frustrating, but that is the conclusion I have come to. So I will talk to my students about rape culture. I will recommend that they read Amanda Marcotte and Janelle Asselin. I will talk to them about Anita Sarkeesian and “gamergate” and how toxic masculinity is bad for women and men alike.

Most importantly, I will make it clear to my students that privilege is a real thing. There are voices in our culture that try to deny this reality—Bill O’Reilly argues that white privilege is a myth; George Will likes to claim that rape survivors receive a “coveted status” on college campuses. In the world that they describe, our society’s true victims are the persecuted white heterosexual men no one seems to trust anymore. That worldview appeals to a certain type of white heterosexual man, I think, because he knows that his life has had plenty of trauma and tragedy (indeed, whose life doesn’t?) and who bristles at the suggestion that he has enjoyed privilege that others have not (even though that is certainly the case). I tend to think that young guys like Tal Fortgang—the Princeton student who wrote the essay about refusing to “check his privilege” that went viral in the conservative blogosphere—are not really malicious. They’re solipsistic. And their solipsism is being manipulated by cultural forces that feel threatened by the idea of people who have been marginalized achieving power.

I can’t deny my own privilege, and I can’t just decline to have it, either. It’s something that was given to me at birth, and it falls to me to use it carefully. Stan Lee wrote that “in this world, with great power there must also come—great responsibility!” Of course, I’m not Spider-Man, and there is nothing particularly heroic about being in favor of equal rights for everybody—it’s just the sensible and unselfish position to take. But my hope is that by recognizing and discussing privilege, genuinely listening to women as they talk about their experiences and opinions, and encouraging students to pay attention to this world’s injustices, I might play a small role in helping to fix some of these systemic problems. At the very least, maybe some of these men who might otherwise have avoided feminism entirely might listen attentively the next time a female classmate speaks about her own experiences. Who knows? He might even read some Gloria Steinem or bell hooks.

William Bradley‘s work has appeared in The Utne Reader, The Normal School, Brevity, The Missouri Review, Truth-Out and other websites and magazines. His book Fractals—a collection of linked essays about love, illness, and a lifetime of dorky pop culture obsessions—is forthcoming from Lavender Ink.