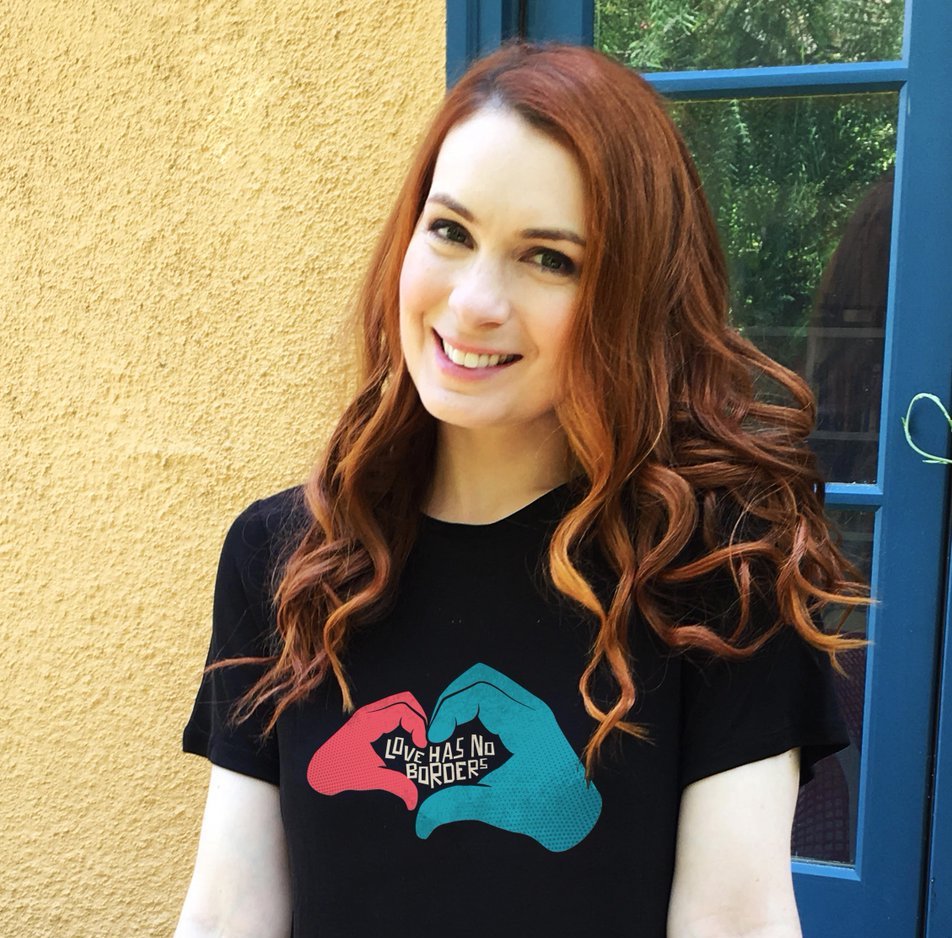 Last week, people all across the nation reacted in rage and horror as we learned the extent of the Trump administration’s brutal family separation and zero tolerance policy at the border. Images and audio of weeping children and horror stories of separated families provoked outrage for innumerable people, and one of them was genre star and geek icon Felicia Day.

Like many of us, Day was furious over the situation and decided to turn her anger into action. “It felt like there was a crest in outrage over what was being done to these children at the border, and as a new mom, I literally was having so much anxiety I couldn’t sleep,” Day told The Mary Sue over the phone yesterday. “When you’re an anxious person like I am, the best way to deal with that is to empower yourself and take action.” Day’s action is twofold: she will be hosting a twelve-hour live stream on Saturday, June 30 and also launched her “Love Has No Borders” shirt campaign with Stands, which coincides with her birthday and will run for two weeks. All the funds raised from both will go to RAICES (The Refugee And Immigrant Center for Education and legal Services).

With so many travesties and issues demanding attention an action each week, Day found the crisis for children at the border to be the one on which she could not be silent. “As a public figure, it’s very hard, because you do want your work to transcend political divides,” Day explained, “and I know a lot of personalities who chose to not even step in areas that might provoke outrage or rejection of their work by fans who don’t necessarily align with their beliefs, and I respect that and I try to remain less inflammatory in my language and accept certain difference of opinion …

“But at a certain point there is a line to be crossed, that you just have to say, ‘This is really actually unacceptable,’ and if you are on the opposing viewpoint, I don’t know what to say to you, because this is an outrageous line, to be taking children from their parents.” As the mother of a seventeen-month-old daughter, Day is particularly affected by the treatment of the children, many of whom are not being tracked or properly cared for. “That’s a travesty and we’re better than that as a nation.”

“We’re talking about children being taken away from their parents, and that’s psychologically scarring for children, especially at such a young age,” Day said. “And the circumstances they’re being kept in is nebulous to say the least, and the little that we’ve seen is unacceptable.” For this reason, Day has chosen RAICES as the benefiting charity: “They do some amazing work in defending and providing legal representation for immigrant children—unaccompanied ones as well as the ones that have been separated from their families.” RAICES is on the frontlines, fighting to get children back to their families, and Day hopes to bring both attention and funding to them through this campaign and the livestream.

Initially, Day intended to do this alone, but as soon as she announced, her community jumped in to help. Day asked a few friends to come over and help her set up cameras for a one person live stream, but then “they said, ‘no, no, no, we’re going to help you makes this really big because we want to do something to,’” Day said, “and they started calling their friends.” Who called other friends and it became something much bigger. “Everyone wanted to be able to do something, but everyone felt powerless. So what has been really heartening is so many celebrities, so many twitch streamers, so many companies have reached out to donate…so that we can reach the greatest number of people possible.” Along with Day on the stream we’ll see Whedonverse alums Seth Green, Clare Grant and Alan Tudyk; Arrow star Danielle Panabaker, Ruth Connell “and several other” of Day’s Supernatural castmates, as well as YouTuber iJustine and gamer Jeff Keighly. There will also be video messages from a plethora of different actors who can’t make it in person.

The livesteam will be hosted on Day’s Twitch channel (embedded above) from 9:00 am to 9:00 pm on June 30. For newbie, non-gamers (like me) Day describes Twitch as a platform for “mostly hardcore gamers” where you can watch other people play video games. That’s about “90 percent of it,” according to Day, with the other ten made up of everything from role playing games, cooking, art. “The great thing is you can live stream anything you want, and Twitch is an awesome partner in helping us provide a boost for this stream and other charity streams.” Day is no stranger to this medium or method for fundraising: a few years ago, she raised over $120,000 for Lupus research on a live stream fundraiser with her Geek and Sundry channel. “The great thing about Twitch is you can interact a lot with the audience,” says Day. In this instance “it’s kind of like a telethon, but it’s live, and we can see you chatting.” And donating.

“You can actively donate during the stream,” Day explained, and with every benchmark, viewers who donate will have a chance to win all sorts of items, including game consoles, games, signed items from Day and others, and schwag from the many shows Day and her compatriots have been a part of, including Mystery Science Theater 3000, Agents of Shield, and Supernatural. The games are going to be simple ones that even philistines like me can understand, like Mario Kart, Rock Band, and card games like Cards Against Humanity or Exploding Kittens. “The whole point is to have a lot of fun, and promote this charity and this cause of reuniting children with these parents, and supporting these immigrant children who can’t defend themselves in this situation,” Day said.

If you can’t donate or watch the stream, you can still buy a shirt from Stands to support the cause, or donate directly. If you can’t give money, Day recommends checking out one of the many rallies across the nation that will be happening on June 30. (If you’re interested in finding a rally near you, go here and enter your zip code.) One reason Day created the live stream event was to give those that are international or cannot attend a rally a place to be heard and activate, but the most important thing you can do is speak up. “Honestly, I think we’re seeing a lot of things that we took for granted in the past being disassembled. Society is changing,” Day said, “and if you have something that is important to you, it is really incumbent on you to stand up and let your voice be heard.”

The primary focus, though, is families, children, and helping the most vulnerable, Day explained. “This not supposed to be a political rally, it really is an issue that I think transcends parties and is really a humanitarian issue.” The world is scary and sad right now, but it’s inspiring to see good people speak up and come together for what’s right. Day summed it up perfectly: “To me America stands for human rights. It stands for decency. It stands for love and welcoming, and whatever happens through the legal procedures to the people who are seeking asylum, we, as a nation, need to treat them with decency and especially protect those who cannot defend themselves, like children.”