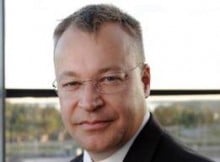 Since Nokia announced that it was effectively ending its use of mobile operating systems Symbian and MeeGo in favor of Microsoft’s Windows Phone 7, CEO Stephen Elop has been under fire for what many perceive to be giving away Nokia’s crown jewels for free. Elop, the first non-Finn to head the company, is under particular scrutiny because Nokia hired him away from Microsoft, where he headed up the division behind Microsoft Office.

At a conference this past weekend, someone from the audience asked Elop point-blank if he was a Microsoft “Trojan Horse.” He denied this:

“The obvious answer is no. We made sure that the entire management team was involved in the process, and of course the board of directors of Nokia are the only ones that can make this significant of a decision about Nokia. They made that final decision on Thursday night.”

Elop later said that the deal would be worth “billions” for Nokia thanks to cheaper licenses for Windows Phone 7 and having Microsoft’s mighty marketing muscle behind Nokia products.