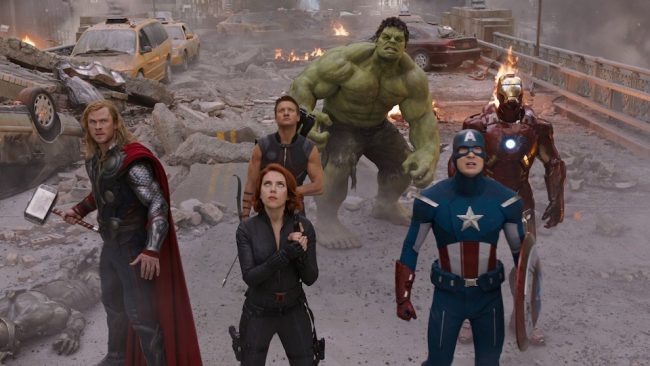 This past weekend saw the opening of Disney California Adventure Park’s new ride offering: Guardians of the Galaxy Mission: Breakout. It’s (you guessed it) based on the Marvel film of the same name, and as we’ve reported before, its development was surrounded with much criticism and angst as longtime fans of the park lamented the fact that it was going to replace a much-beloved old attraction: the Twilight Zone Tower of Terror.

But between the incredible five hour wait times (!) and the sheer amount of people queued up in the park, it would have been easy to miss one little tease that promises a major change to the Disney Parks landscape: this side hatch emblazoned with an Avengers logo.

Apparently Disney Parks officials attempted to get news of this hatch and the tease to go viral by bringing a hazmat-suited crew in to examine the hatch. It’s located just past the ride itself, and like I said above, you wouldn’t be blamed for missing it, given just how many people were there that day. But as MiceChat, a Disneyland enthusiast news site rumored, the tease was for a brand new E-Ticket (read: big, massive production) Avengers-themed coaster that’s just been greenlit for the lot behind Mission: Breakout.

The steady encroachment of Marvel-themed rides and attractions was inevitable after Marvel was snapped up by Disney a few years ago. But only time will tell if Mission: Breakout is actually the Marvel flagship to a slow, steady conversion of what used to be the Hollywood Backlot section of California Adventure. There just isn’t enough space for a brand new “land,” exactly, and likely most of their funds are being shunted towards building up the hotly-anticipated Star Wars Land in Disneyland park proper. It stands to reason that a lot of the Marvel movie attractions would be placed in this part of the park, as in the past, it was one of the lesser-attended portions of California Adventure.

Either way, it’s kind of a funny thing to think that this “post-credits scene” of sorts during Mission: Breakout’s big premiere is just so perfectly in line with the Marvel M.O. of teasing the next thing as soon as you’re done with one major project. What works in the movies seems to be working pretty well for real life—albeit, “real life” in a theme park.