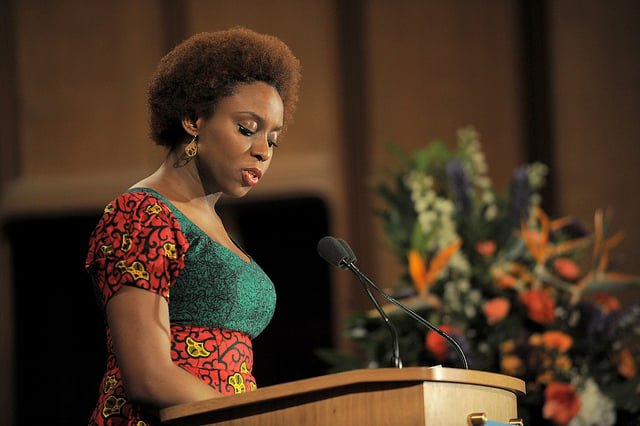 Writer and feminist Chimamanda Ngozi Adichie continues to inspire with a new makeup campaign called “READY to Speak Up” from British brand Boots No7.

Ngozi Adichie has written before about her love of makeup and how she it doesn’t compromise her work, stating in this NY Mag interview “I can intellectualize it and say that it’s also partly the idea that I refuse to accept that somehow feminism and femininity are mutually exclusive.” Mashable shares an email statement where the novelist writes, “I love makeup and its wonderful possibilities for temporary transformation,” and, “There is something exquisitely enjoyable about seeing yourself with a self-made new look.”

Feminism in marketing is a complex topic, which Teresa explores in-depth here. I like that Ngozi Adichie is the face of this campaign because it might mean more people will know about her and her writing. I also love that the emphasis is on how cosmetics make one feel, and the first image from the campaign emphasizes a wide selection of skin tones–something the makeup industry has been notoriously bad at doing.

What do you think about Boots No7’s campaign?

(via Mashable, Image via Commonwealth Foundation on Flickr)
Want more stories like this? Become a subscriber and support the site!