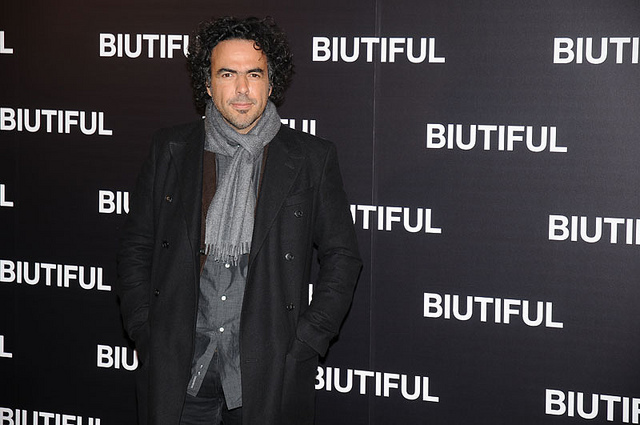 Alejandro G. Inarritu has pushed a few more boundaries with his latest work, a virtual reality installation that tells the story of immigrants trying to cross the Mexican border into the United States. Carne y Arena (Virtually Present, Physically Invisible) is a six-and-a-half minute experience that has viewers first enter a holding cell reminiscent of the ones currently being used by border guards. Participants are only allowed to experience it alone, so that feeling of isolation seems to be quite palpable right from the get-go. Your shoes and your socks are removed, and you’re outfitted with a backpack and VR headset rig, then you’re allowed to wander the massive airplane hangar alone in your virtual world.

This is how The Hollywood Reporter described the experience, at least. The VR portion has you wandering the desert a bit as a group of migrants enters your view. They’re all real people, telling real stories of their crossing. They’re interrupted as a border guard shows up and points a rifle at your face, bringing a bit of real terror to the proceedings.

It’s a fascinating installation, and knowing that Inarritu is behind it makes it that much more of an intriguing entry into the VR sphere. From a storytelling standpoint, this is one incredibly useful way of leveraging VR technology in order to promote empathy. That being said, there’s massive potential for other similar applications to go fully into appropriation of experiences, but here, given Inarritu’s own experiences, it seems like an incredible look into some very real human stories.

Technologically speaking, “room-scale” VR (a term I use loosely here) is something that still evade many designers, both from a technological and a storytelling standpoint—we don’t all have hangars lying around for our own personal use, after all. You likely wouldn’t get a lot of the same feelings that the viewers at the installation did if you were, say, just sitting on your sofa checking something like this out. There are a lot of physical sensations that come with wandering around a large hangar by yourself that just aren’t present in the typical end-user experience.

One hopes that Inarritu’s involvement may spark a renewed interest in the exploration of VR or even immersive storytelling. Carne y Arena is, after all, the first VR film to be shown at the Cannes Film Festival, a truly auspicious achievement. Personally speaking, I hope that this is what we can look forward to with VR technology—the world just plain doesn’t need another horror game (sorry not sorry).