Batman: Year One to Include Short Catwoman Feature 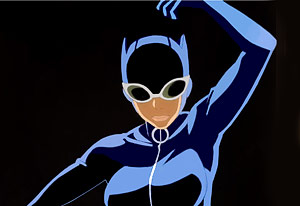 According to TVGuide, the upcoming animated adaptation of Batman: Year One, featuring the voice talent of Bryan Cranston, Eliza Dushku, and Katee Sackoff, will, like about half of the films in the DC Universe Animated Original Movies series, come with a fifteen-minute short featuring one of the less well-known DC Comics characters.

Previously these shorts have featured The Spectre, Jonah Hex, Green Arrow, and Captain Marvel, and the accompanying short for Year One will feature, naturally, Catwoman.

Catwoman is the only other costumed character to appear in the graphic novel (although I believe Superman is mentioned offhandedly… in that one scene… yes I pretty much have Batman: Year One memorized), and she’ll be the first female character to get a DCUAO short, and the second female character to “headline” in a DCUAO movie, after Wonder Woman. According To TVGuide:

In Catwoman, the femme fatale tangles with crime boss Rough Cut (a brand-new character created for this short, voiced by Futurama‘s John DiMaggio) in a breathless and brutal 15-minute chase through Gotham City tracking down a mysterious cargo shipment.

The above is the picture of Catwoman that accompanied the article, in a costume based on Darwyn Cooke’s redesign. However, TVGuide doesn’t actually say that this is a picture of Catwoman from the short, but it might be. I’d be surprised, however, if this was the costume used in the adaptation of Batman: Year One, since the people behind it seem very set on preserving the look of the comic, and this is a much more modern Catwoman costume than the one Frank Miller put Selina in back in the mid-eighties.