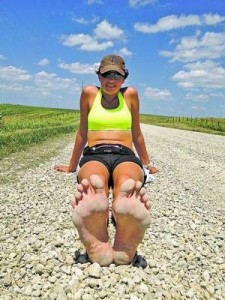 Heim didn’t always like to run — as a kid who played softball, she dreaded even running around the bases. What began as a personal journey to prove to herself and her family that she could run has turned into a cross-country trek. 18 year old Heim set off on her adventure just after she graduated high school, much to the initial dismay of her parents. When first confronted with her daughter’s plans, her mother responded with an emphatic “NO!”. However, after some coaxing her mom has since hopped on board with her: “I believe in raising independent, gracious, generous kids who lead with their hearts,” she said.

Heim started running from Boston in April, essentially sprinting out of the gate and clocking in 40 miles per day. The barefoot runner had to don shoes in New Jersey,  where she encountered glass-filled roads and rusty nails. Other than that, it’s just been her, the skin of her feet, and the pavement.

The young athlete has slowed her pace down considerably, now only covering an average of 20 miles a day, especially since twisting her ankle and injuring her Achilles tendon and knee in the early days of her run. Despite her injuries and the burden of the seemingly insurmountable task of running across the nation, Heim is bound and determined to continue across America —  especially since her personal mission has also evolved into a fundraiser for Soles4Souls, an organization that raises money to buy shoes for children in need.

Whenever she feels like quitting, she says, “I think of the $2,900 I have raised. That’s 2,900 pairs of shoes.” With nothing but a backpack and her running outfit, Heim is giving nearly 3000 children an alternative to walking on gritty, rough roads, a pretty impressive feat for anyone, let alone an 18 year old. Her run will end in October when she reaches Huntington Beach, California.

As for her impressions of the nation she’s crossing, one foot at a time? “The kindness I’ve seen in people surprised me. You always hear all the wrong with the world,” she said. “But I’ve seen nothing but good in the world.”

We wish her luck on her tremendous expedition!

(via The Des Moines Register.)