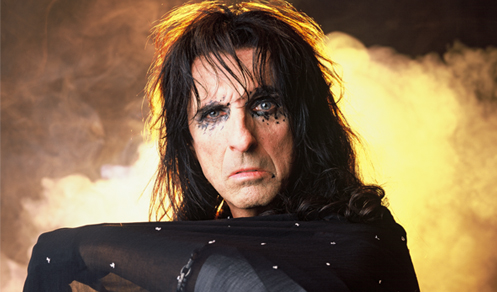 In one of the most shockingly appropriate casting announcements ever, Alice Cooper, shock rocker extraordinaire, will be joining Tim Burton‘s film adaptation of campy horror TV series Dark Shadows. If you’re wondering which member of the Collins clan he’ll be playing, your speculation can end here. Cooper will be playing himself, in “full spandex regalia.”

Cooper will be performing “No More Mr. Nice Guy” as a younger version of himself along with his “horror-show band” in the movie, the set of which he has already visited:

The aging Hall of Fame musician commented on the impressive, elaborate sets at the Warner Bros. film’s production on a recent visit to Pinewood Studios in England, the location for many Burton blockbusters.

“They should take that set and make it a haunted house next year,” Cooper joked.

If WB won’t do it, Cooper probably will. Also noteworthy is the promise of Cooper in “full spandex regalia”! We would not accept Cooper in any other form.

Rumors about a possible cameo started back in June when Cooper was performing at the 100 Club in London and Johnny Depp — who is playing the lead role of Barnabas Collins in Dark Shadows — suddenly showed up to play guitar for two sets. (“I’m Eighteen” and “School’s Out,” in case you were curious.) Depp’s appearance was a total surprise to the crowd, especially when Cooper introduced him as “Johnny Dee from Ken-tuck-EEE.” You know, just some dude. Who makes billion-dollar blockbuster movies and is occasionally nominated for Oscars.

Here is video of the Cooper-Depp collaboration we can see before Dark Shadows comes out, which actually includes Cooper doing an impression of Keith Richards, whom Depp impersonated to create the character of Jack Sparrow.

And, for good measure, Alice Cooper doing “School’s Out” on The Muppet Show: