Yummy: A History of Desserts Is the Perfect Graphic Novel at the End of a Meal

Who invented the waffle cone? 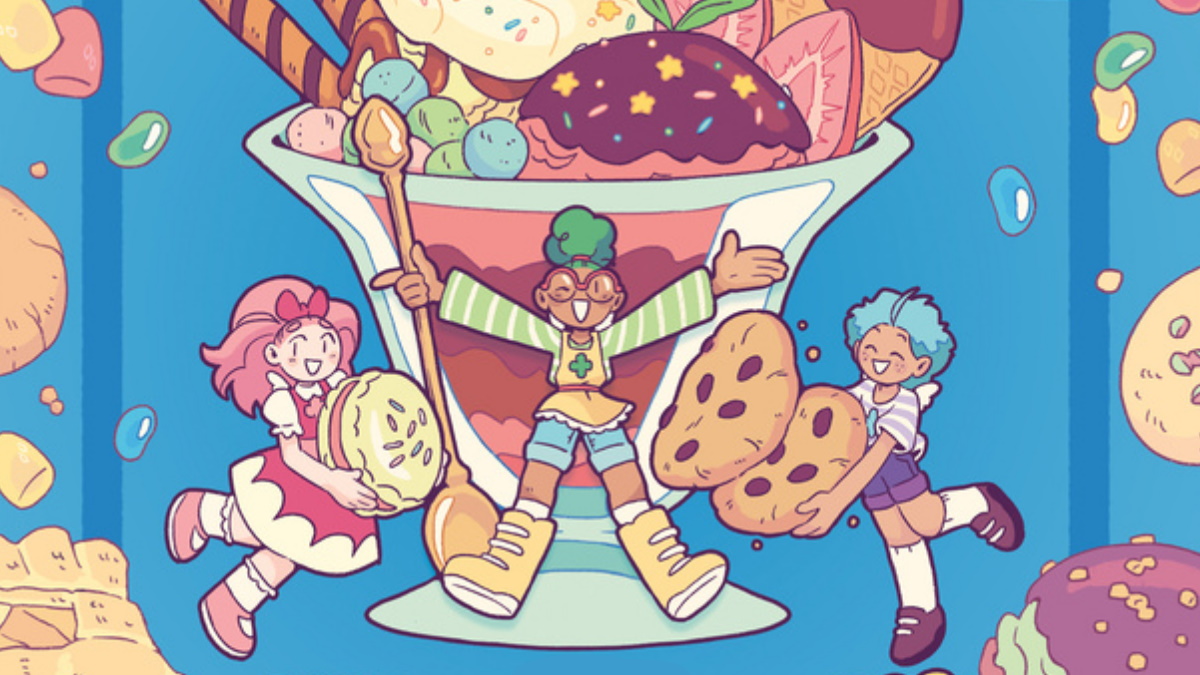 As someone who has been blessed with a wife who only takes two bites out of a shared dessert before giving me the rest, I can safely say that the sweet notes at the end of a meal are an important part of my day. That being said, learning about the origin stories for ice cream and brownies haven’t been high on my list of things to do—until I saw this upcoming graphic novel from cartoonist Victoria Grace Elliott. 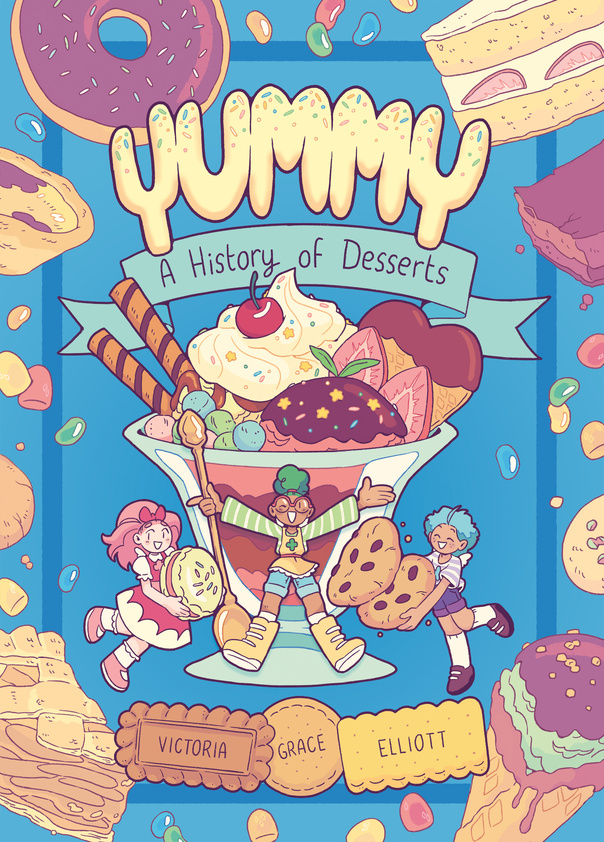 In Yummy, the food sprite Peri shows readers the delicious history of sweets while taking them around the world and back. Peri shares the legends of the team-up that made ice cream cones, the mistake that made brownies, and who put the hole in the donut, as well as many other culinary mysteries, fables, and delightful accidents that created the wide world of desserts as we know it today. With an eye towards historical accuracy and cultural context, Peri and her team of sprites take readers on a journey from an era when sweets were reserved only for those rich in time and money all the way up to today, when a freshly baked cake can spring from a box in minutes!

“In Yummy: A History of Desserts, three food sprites lead us through the fun facts, legends, science, and key historical figures of desserts from mochi ice cream to macarons,” says Grace Elliott. “Peri, our lead narrator, especially loves Story Time, where she shares infamous dessert legends. Whether mostly true or mostly false, these legends reveal a lot about the people who love to tell these stories.”

The “mostly true or mostly false” part is brought to life in this exclusive excerpt highlighting the origin of my personal favorite kind of ice cream cone, the waffle cone! 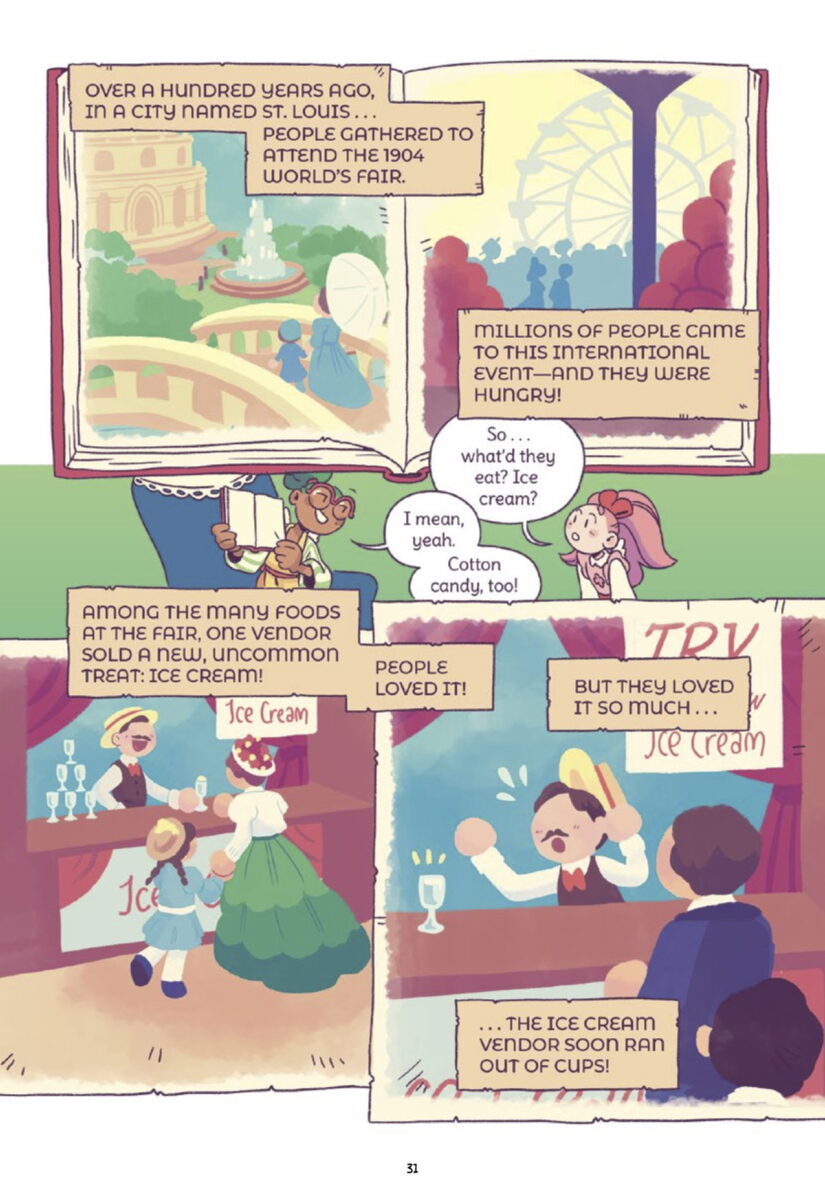 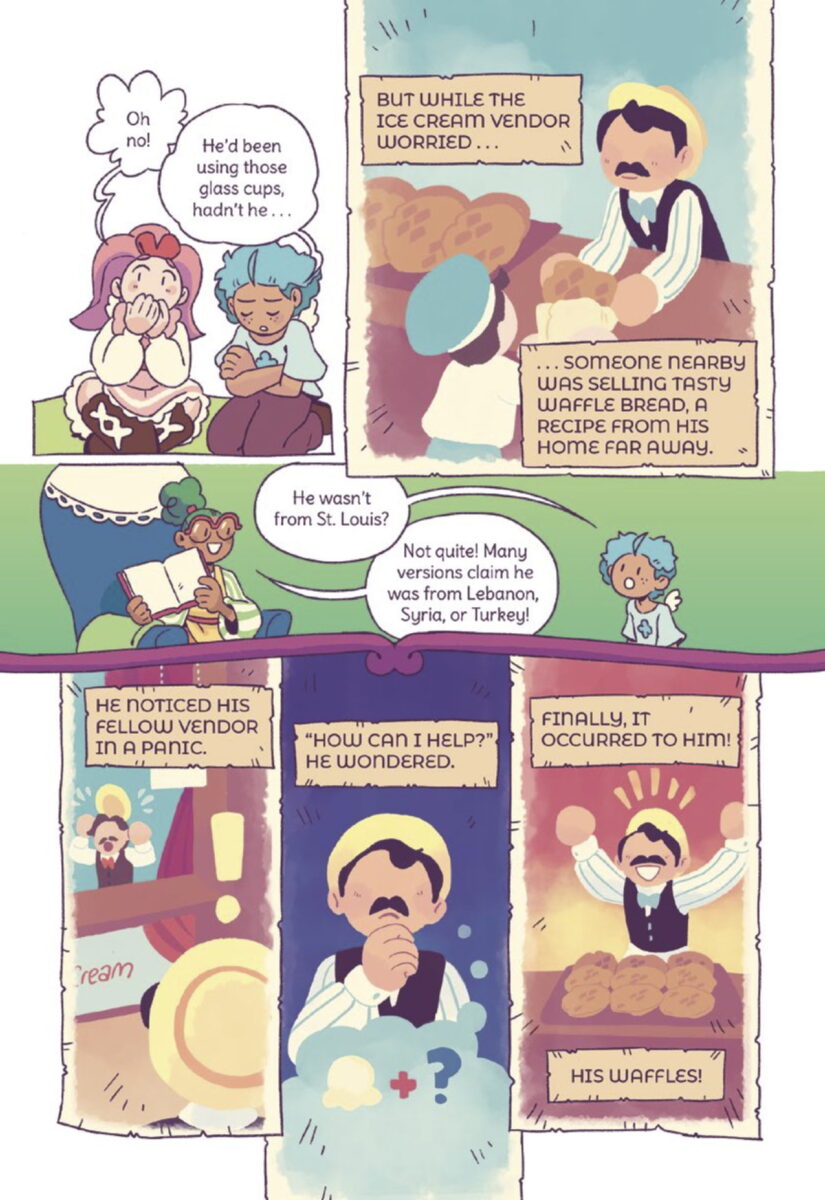 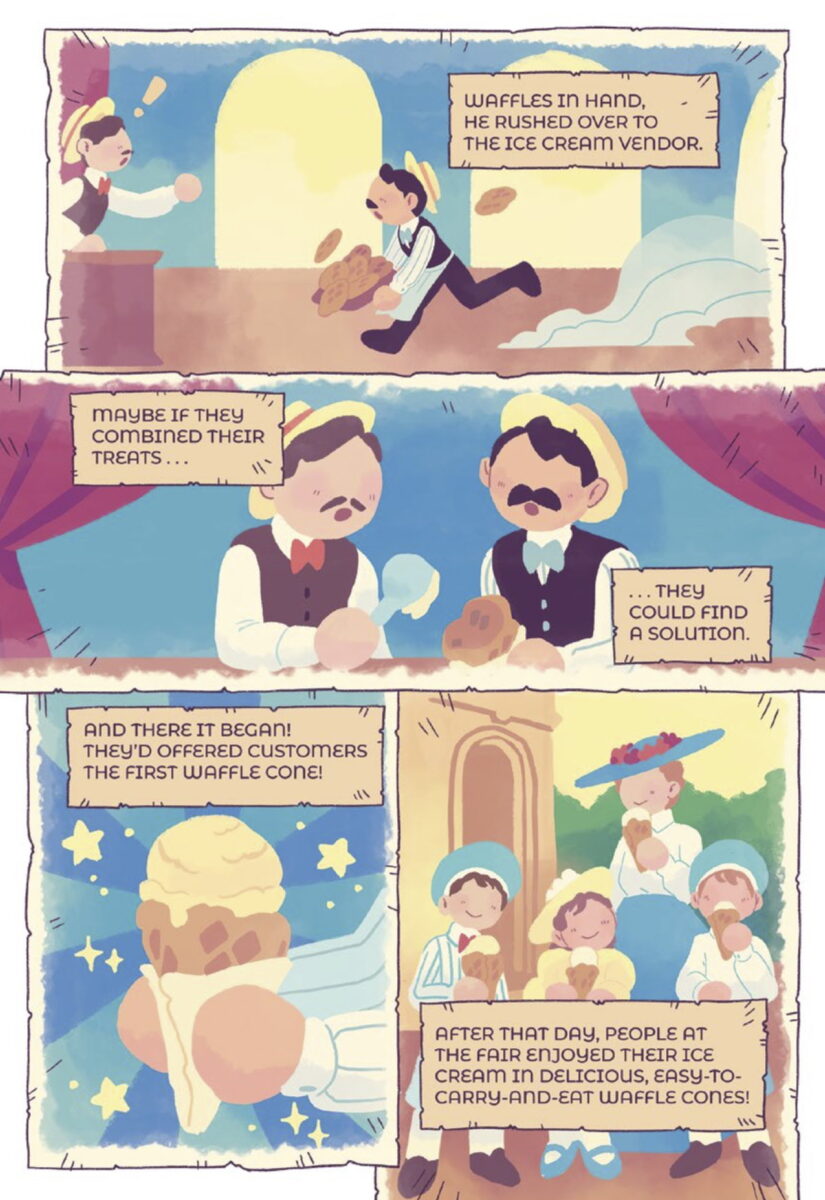 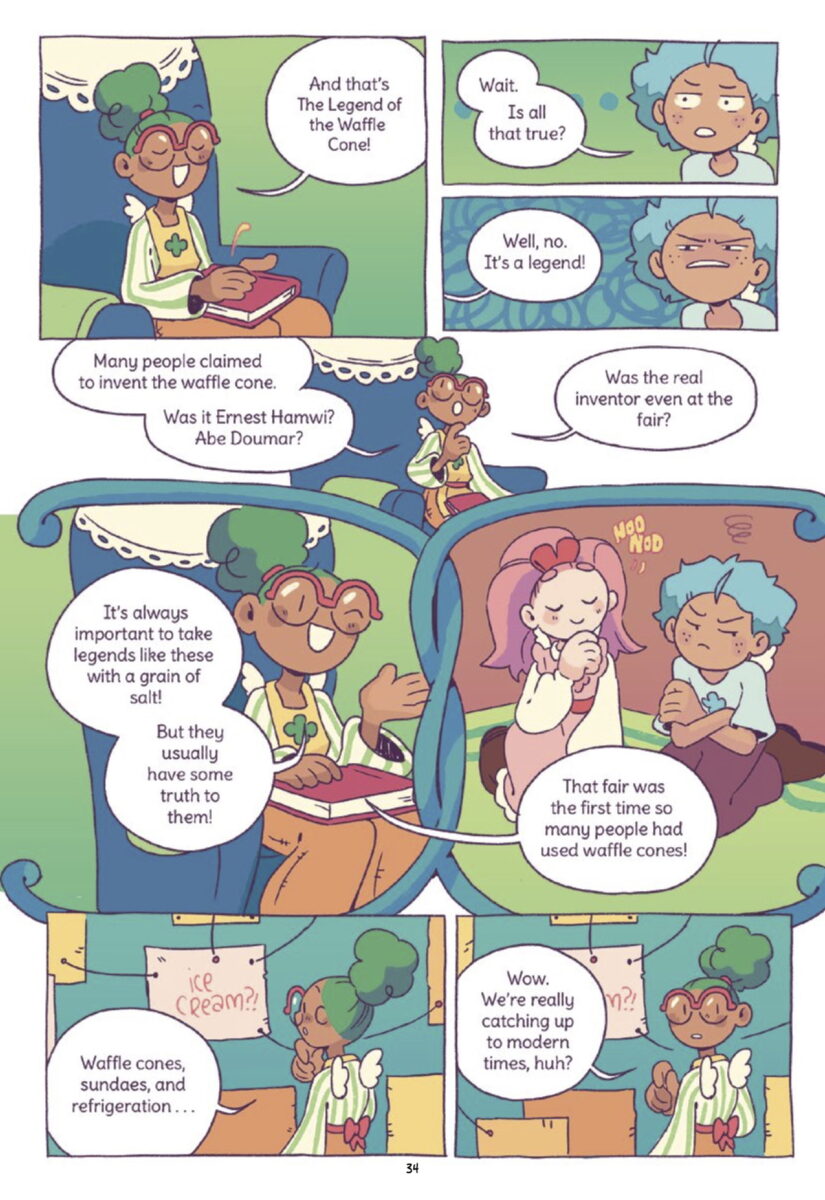 A quick Google search shows that, as Peri says, this story is a legend. According to the website Serious Eats, the myth began over a decade after the St. Louis World’s Fair.

Curiously enough, none of the records from the many court cases make any reference to the St. Louis World’s Fair, and none of the defendants purported to have invented the ice cream cone by rolling up a waffle. It wasn’t until more than a decade after the Fair that people starting making such claims. Almost all the tellings involve an element of drama — typically, an ice cream vendor runs out of cups, or guests start ruining their clothes as they eat melting ice cream with spoons, and some crafty person saves the day with a rolled-up waffle.

Many supposed inventors have been proposed over the years. One story attributes it to Ernest Hamwi, a Syrian-born concessionaire selling zalabia, a sort of thin Middle Eastern waffle. Others credit it to Abe Doumar, David Avayou, or two different sets of brothers, Nick and Albert Kabbaz and Charles and Frank Menches.

I like how Yummy: A History of Desserts takes the legend and uses it to delve into the actual history of the dessert in question (assuming the actual history is known, but it looks like the book will discuss the multiple stories for these foods). Since these are foods that have existed for so long, it makes sense that there might not be a singular source for their origin, so this is a fun way to look at the facts and how those facts have turned into some pretty fantastical stories.

I personally adore the idea of a waffle vendor rushing over to help an ice cream man who ran out of cups. It’s not true, but it’s fun, and a good segway into the actual history of the ice cream cone. For instance, the graphic novel shows a picture of a woman eating ice cream cones with her three kids, which we can assume is meant to depict Mrs. Montague Lyon. Why? Because it’s a near-identical match to a photo of her eating ice cream at the World’s Fair with her children back in 1904. 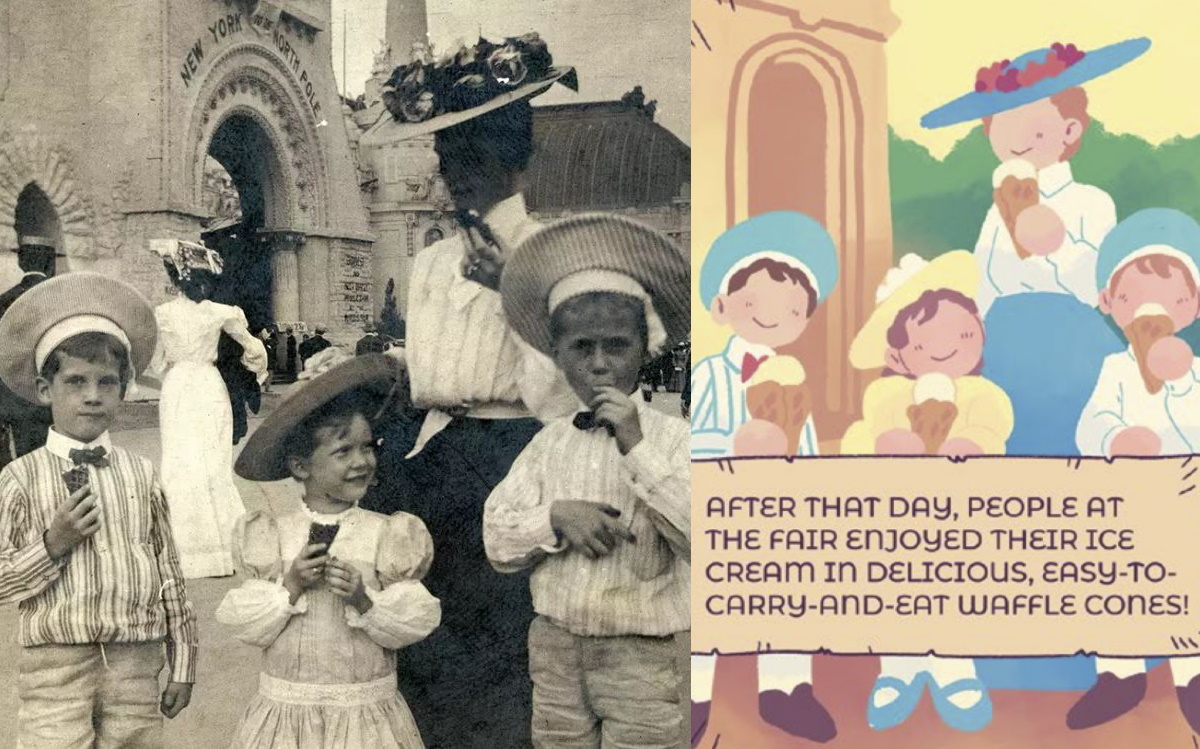 Another excerpt from Serious Eats’ write up about the history of ice cream cones:

One thing we know for sure: Visitors at the World’s Fair ate plenty of ice cream in cones—or cornucopias, as they were called at the time. Mrs. F. M. Hicklin wrote home to her family in South Carolina that the “waffle cornucopia filled with ice cream” was a treat widely enjoyed on “the Pike”—the Exposition’s version of a midway, a mile-long strip lined with cafes, amusements, and food concessions.

A photograph taken at the Fair shows Mrs. Montague Lyon and her three children standing outside the “New York to the North Pole” attraction, each holding an ice cream cone. (The eldest boy has managed to insert his cone almost completely inside his mouth.) The long cones have waffled sides and pointed bottoms, and they appear to resemble the molded type of waffle cone familiar to us today instead of just a rolled-up waffle. This suggests that the confection was neither an improvised creation from a waffle stand nor a product of Valvona’s or Italo Marchiony’s biscuit-cup mold.

And it’s at this point that I realized that after reading four pages of this graphic novel I actually got invested in the history of ice cream cones enough to look it up. Now I’m hungry and educated.

Yummy: A History of Desserts will be released on November 30th, which is just enough time after Thanksgiving to no longer be in a food coma.