Destiny has a book. The end. 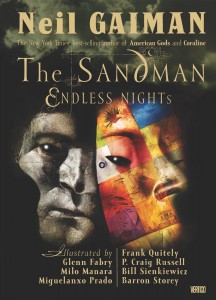 The WTF Comics Club is a monthly reading group for Women, Trans, and Femme-identified fans in Minneapolis. In its second year, the club is taking a look at some of the major comic book “must reads” and asking: Must we really read this?

Neil Gaiman’s comic book saga The Sandman was published from 1989 to 1996 by DC Comics “grown-up” imprint, Vertigo. The series chronicles the epic adventures of Morpheus, AKA Dream, one of seven anthropomorphic personifications of archetypal ideas called the Endless. Released in 2003, well after the end of the series, Endless Nights collects seven short comics, each centered around one of the Endless.

Death, Desire, Despair, Delirium, Destruction, Destiny, and, of course, Dream, characters familiar to Sandman readers, each take center stage in their own story. The comics in Endless Nights vary widely in tone and style, from a series of stark vignettes about Despair to a story about a mysterious pile of stuff from the future, featuring Destruction. Some, like Dream’s “The Heart of a Star,” are obviously intended for fans familiar with the Sandman mythos, filling in pieces of background that are only hinted at in the core series. Most offer perspectives on characters who appear only briefly in the existing comics.

Endless Nights opens with a story about Death, which the WTF readers found underwhelming, despite being charmed by the character of Death herself. Those who hadn’t read the rest of the Sandman oeuvre found Dream’s story inaccessible and boring, and those of us who had still readily admitted that the story itself was a bit flat, even if the information was interesting. We generally agreed that the Destruction chapter would have been much more interesting as a fully-realized science fiction plot instead of a brief aside about a barely-there character.

For the WTF readers, the stories inspired a range of reactions from one to the next, but our group seemed fairly consistent in their thoughts. The chapters that sparked the most interest were those focused on Delirium and Despair, for the stunning art and rich writing, and Desire, which features a compelling story that overcomes its underwhelming and dated artwork.

We are, however, collectively side-eying Gaiman for referring to the androgynous Desire as “it” throughout the book, an offensive error which we can only hope has been corrected in subsequent editions of this and other Sandman collections. If it hasn’t, then Neil, I’m sorry, but we have a problem.

During the discussion, one group member mentioned that the Destiny story, which ends the collection, was originally written to be drawn by legendary French artist Moebius, but that dream—pause for chuckles—was never realized. Instead, Destiny’s chapter is drawn by Frank Quitely, whose work here is lush and lovely, though not quite enough to breathe life into what is ultimately a simple coda to the book. As one reader remarked, Destiny “was created before personalities were invented,” and his story is, therefore, extremely lacking in personality.

An argument was made that a character who’s the embodiment of destiny couldn’t really have much of a persona, anyway, but there is something to be said for what can be accomplished by a writer who is more invested than Gaiman seemed to be by that point in the process. Personally, I’d like to see Destiny as something like the friend who’s seen all of the show you’re watching on Netflix right now; they really want to tell you want happens, but they’re excited for you to find out on your own.

Overall, despite the astonishing lack of women anywhere at all on the creative team and the staggering absence of characters of color in even the background scenes, the WTF readers agree that Endless Nights makes the cut as a must-read comic, since it has a lot to offer to a variety of readers. It’s an excellent introduction to one of the most famous comic book series in the world, it’s a fun read for those who are already fans of Sandman and Gaiman’s other work, and even the stories that aren’t phenomenal are still just really good. We also recommend Despair and Delirium’s chapters for art lovers and for anyone interested in some of the incredible ways the comic book medium can be used.

It also made me want to read Sandman again, which is a pretty good sign.

The books for WTF Reads were determined by cross-referencing recommendation lists from four online publications: Forbidden Planet, Empire, BuzzFeed, and Complex . Titles were then selected based on a number of criteria, including popularity, importance, accessibility, and thematic continuity. Popular Ratings are on a five-star scale, averaged from ratings across Comixology, Amazon, and Barnes and Noble. WTF Ratings are on a five-monkey scale, based on responses from club and community members. Only books that receive five monkeys will be preserved after the gender apocalypse.