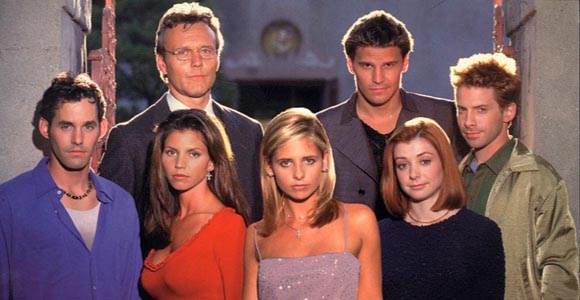 Saturday at WonderCon 2014, a group of psychologists, and one psychologist-in-training, held a panel to discuss why cult TV shows really speak to us geeks. The panel included licensed therapist Josué Cardona (GeekTherapy.com), psychology professor Dr. Travis Langley (Batman and Psychology: A Dark and Stormy Knight), clinical psychologist and scientist Dr. Janina Scarlet (The Superhero Manual), and Elizabeth Ann (NerdLush.com). The panel had a packed room, with nearly two dozen con-goers occupying standing room in the back due to the lack of seats.

A little background info: Cardona and Scarlet use comics and pop culture with their patients to help address various issues. Dr. Langley teaches college courses where he uses pop culture and comic book stories to teach his students. Elizabeth Ann is working towards her clinical forensics doctorate, has a masters in forensics psychology and a specialty in sex offender treatment.

Dr. Scarlet opened up the discussion by asking the panel what they considered to be the value of TV shows. Elizabeth Ann pointed out this depended on the TV show, remarking, “Keeping Up with the Kardashians, I’m sorry, is a waste of time.” She added, “I think that TV is a way of observing yourself from another perspective. Because you may not be able to see something in yourself that you may connect to via a character . . . Especially with genre or cult TV . . . So many of my friends, my colleagues, we’re here because of fandom. We connected . . . Bless social media.”

“Even the bad TV, you get to learn some things in terms of what not to do,” Langley joked. “I like stories. Reality TV, which we all know is not reality . . . I see greater truth in fiction than in that false reality . . . A criticism against television is you’re not using your imagination because it’s handing it all to you. Oh, really? How often do you keep thinking about this stuff later on, imagining where else the story might have gone or where it’s going? . . . You’re imagining the subsequent seasons of Firefly.”

Cardona spoke of how “mindless” television can have merit as being a relaxing form of entertainment after a tough day. Scarlet added, “I think that TV shows allow us to form a really important connection at a time when we really need it.” She then had the audience show, by raising their hands, how many of them had gone through something difficult in their lives and then saw the experience or the feelings surrounding it reflected in a favorite TV show, book or comic book. Many hands went up. Scarlet said, “It can feel really validating and you can feel like someone gets it . . . Over time, we learn to trust characters. We learn to open up with them, we become vulnerable with them . . . We don’t know when they might die . . . We don’t know when the character might betray us . . . There’s a reason why you guys are here, there’s a reason why you guys are interested. Because you loves these shows, because you believe in them, because you connected with them.”

The panel spoke on the value of fandoms and what is meant by the phrase “cult TV.” As Langley explained, “There’s a following, there’s an excitement . . . Thanks to the internet, there’s a stronger sense of community with these things as well . . . And then some people are like, ‘Doctor Who‘s getting too popular! It’s kind of bothering me!’  . . . Maybe any kind of fandom where that can happen, where it grows beyond the cult, there’s a [worried] sense of, ‘Are we losing that sense of community?'”

The panel did agree that, as with any other hobby, it was important not to let a show override your life or ignore any consequences that happened, large or small, due to habitual or binge watching. Along with the sense of community, Cardona commented that social media and fandoms have helped him share negative experience with others about the portrayals of minorities in television. He said that social media had enhanced the ability to share these experiences with other fans and support or discuss each others views. “To be able to share a common language, to make that TARDIS reference, to make that Buffy reference, and people [around the world] get it. That connection is so, so special.”

Langley pointed out TV is more effective in creating a common language than books and comic books in general. “You quote the latest issue of Batman, they don’t necessarily know it . . . TV, you can be sure more people will get. There’s more of a shared experience. Even the outsiders will get more of an idea what you’re talking about.”

Going back to the topic of minority treatment, Dr. Scarlet said many cult TV shows and geek genre stories have messages of acceptance and tolerance, as well as how first perceptions can be wrong. “It takes a long time to develop that relationship, to really walk in another person’s shoes to really understand them.” She brought up the online sitcom Husbands, created by Brad Bell and Jane Espenson, as a good example. Elizabeth Ann then mentioned Quantum Leap as another example that had struck a chord with her when she was younger. “He [the main character Dr. Sam Beckett] did walk in the shoes of the other person. There was that episode where he was pregnant. It was awesome . . . The amount of history that they showed in there that wasn’t taught to me in class at school. And the amount of emotional connections he develops every time he leaps into another person.”

Elizabeth Ann also spoke of how several many cult TV shows teach perseverance by showing characters overcoming hardships, reminding viewers that any bad day might be followed by a good day and that they didn’t need powers to overcome it. “In the end, you know Cap’s gonna show up or Hulk or anybody and they’re gonna help you out. Friends are there . . . [In Buffy the Vampire Slayer,] it didn’t matter to Xander that Dawn didn’t have powers . . . You just have to be you. You just have to live your life and be happy because you matter.”