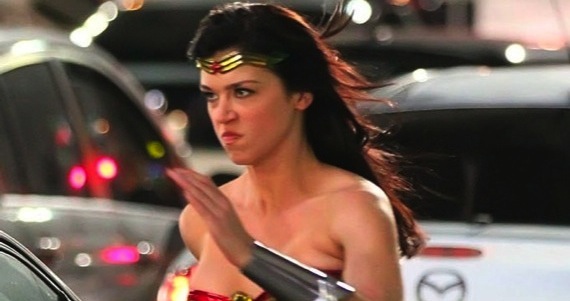 That’s why we’re not too sad that Entertainment Weekly has reported that NBC passed on the revamped Wonder Woman. Is this a jab at all the women-in-something-arms across the nation? Well, we’ve decided not to take it that way. So why did they pass?

NBC isn’t saying for now, but scuttlebutt reveals the pilot earned mixed reviews at test screenings. And then there was all the online blow back about the costume – which seemed to de-emphasize the patriotism and play up the comic’s Greek mythology. Ultimately, the wardrobe department went back to the drawing board but that didn’t seem to save the project.

Wardrobe? Look, if what you wore saved the day, I would change out of my t-shirt right now. It’s not all about what she was wearing; it’s about what it meant. Slapping fans in the face with those PVC blue pants said “We’re not really concerned with accuracy, per say.” Hiring David E. Kelley, famous for penning Boston Legal and Ally McBeal, said much the same. The original television show was scripted by Stanley Ralph Ross (also famous for writing Adam West’s Batman). In an age when even Jonah Hex gets a superhero movie, NBC couldn’t find someone with a little more comic cred? Seems improbable.

Sure, in place of Wonder Woman will probably be Celebrity Apprentice 3000: Robot Edition or something equally stimulating. (Wait no — Robot Celebrity might actually be cool.) But we’re not mad at NBC, not when they gave it a try. Anything that brings our buddy Diana Prince into to the limelight for closer inspection can’t be all bad. And props to NBC for showing the restraint to pass on something that earned “mixed reviews”.