Something wik'd this way comes. 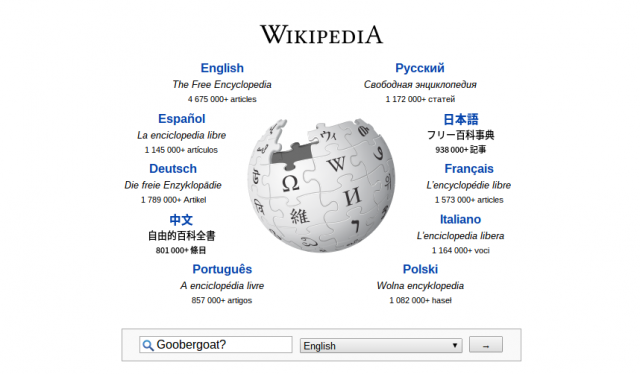 Last weekend the news broke that Wikipedia’s Arbitration Committee was planning to ban five feminist editors from covering entries pertaining to Gamergate and “gender or sexuality, broadly construed” as punishment for allegedly violating Wikipedia policies while attempting to prevent a pro-Gamergate slant in the “Gamergate Controversy” article. (Fun fact: if you say “Gamergate” thrice in one sentence, Bloody Mary comes out of your screen to chat about journalistic ethics.)

Although the decision has not yet been made final, Wikipedia editor Mark Bernstein explained in a blog post that “by my informal count, every feminist active in the area is to be sanctioned […] no sanctions at all were proposed against any of GamerGate’s warriors, save for a few disposable accounts created specifically for the purpose of being sanctioned.” So what gives, Wikipedia? (Aside from at least 11 out of the 14 people on your Arbitration Committee being dudes, that is.) Why ban feminist editors from an entry that even Wikipedia founder Jimmy Wales agrees has a direct impact on their well-being?

In an email response to our request for comment on the Committee’s decision, Katherine Maher of the Wikimedia Foundation, a nonprofit that supports Wikipedia and its sister projects, directed us to a blog post published yesterday by Wikimedia’s Director of Community Advocacy Philippe Beaudette. Wikimedia does not make editorial decisions and is separate from the volunteer-led Arbitration Committee, but in light of the attention Wikipedia has received in the press, Beaudette decided to “share what we know about the issue, and how it has played out:”

The debates on Wikipedia about the Gamergate controversy article have been very heated, drawing participants from many different perspectives, and have gone on for many weeks now. At times, contributors on various sides of the debate have violated Wikipedia’s standards of civility […] A group of trusted, long-term volunteer English Wikipedia editors (known as the Arbitration Committee) is now reviewing the conduct of the editors who participated on the Gamergate controversy article discussions.

Beaudette goes on to clarify,

Several press stories have mistakenly claimed that Wikipedia has targeted and banned feminist or female editors. This is inaccurate. Although the Arbitration Committee may recommend that some editors be prevented from further contribution to this particular topic, they have not banned anyone from Wikipedia. The sanctions they are considering are broad, and affect many people. As of now, the Arbitration Committee is considering issuing some type of warning or sanction to around 150 people, from a range of perspectives, based on their participation and conduct. This is not about a small group of people being targeted unfairly. It is about a very large group of people using Wikipedia as a battleground.

At the Wikimedia Foundation, we are guided by our core mission to make the sum of all human knowledge freely available. Although the Wikimedia Foundation does not set editorial policy for Wikipedia, we believe that we can only achieve our mission through the inclusion and respect of diverse voices. We offer resources for programs and outreach with our partners across the global Wikimedia movement and engage people that have been underrepresented in traditional encyclopedias. These include women, people of color, people from the Global South, immigrant communities, and members of the LGBTQ community. They are invaluable contributors to our community and partners in our mission.

On Monday night, the Arbitration Committee also released a statement on the controversy:

Our preliminary decision found that many contributors were in violation of English Wikipedia policies on user conduct. The proposed decision imposes broad sanctions against a wide range of individuals, however this decision is subject to change, and proposed sanctions have not taken effect. These sanctions are intended to allow the restoration of normal editing processes to the topic area and facilitate constructive contributions. Our investigation and findings do not pass judgement on the content or quality of the articles in question.

The Committee goes on to explain, under “Findings on Editor Conduct:”

The Committee’s preliminary decision currently includes broad recommendations for, and endorsements of, community sanctions and topic bans for editors on various sides of the dispute. These include:

The current majorities on the proposed decision are not in favour of banning any editors from Wikipedia.

Considering the prevalence of misogyny within Internet communities frequented by Gamergaters, I’m personally taking these statements with a Titanic-sized grain of salt. What do you all think?