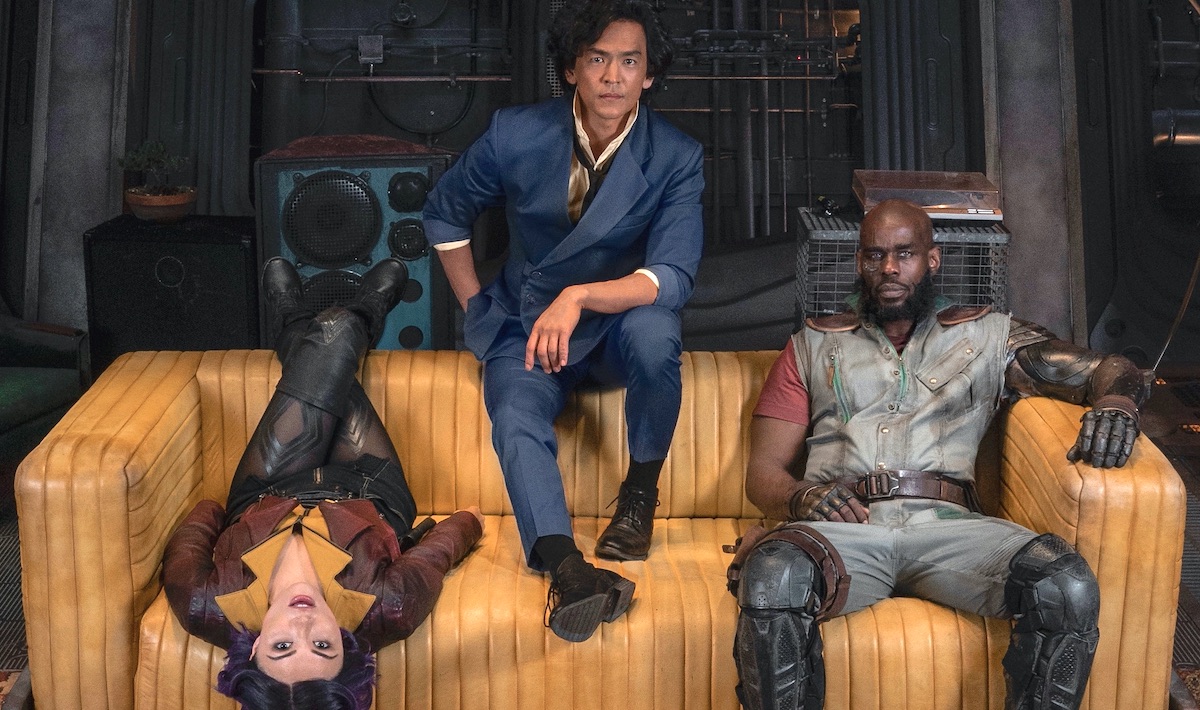 Somehow we’re already going full speed ahead into November? With that autumnal month mere days away, we bring you what’s new and shiny on Netflix.

There are several shows and movies that we offer thanksgiving for. We can’t wait for Rebecca Hall’s directorial debut, Passing (11/10), starring Tessa Thompson and Ruth Negga. There’s also a Netflix “book club” series launching November 16th that will explore the adaptation of Passing from the 1929 novel by Nella Larsen.

I’m (tentatively) anticipating tick, tick … BOOM! (11/19) starring Andrew Garfield. The musical-inspired movie is directed by Lin-Manuel Miranda and has been made to be even more of a biography about the life of RENT composer Jonathan Larson than Larson’s original show. I’m a fan of Larson’s tick, tick off-Broadway musical and am curious to see how they’re transitioning it to the screen.

We also have the exciting Western The Harder They Fall (11/3) starring no less than Jonathan Majors and Idris Elba. Oh, and also Regina King, Zazie Beetz, LaKeith Stanfield, and Delroy Lindo. This cast is unreal.

Speaking of celebrations, a host of new holiday movies are joining Netflix in November, including the romantic A Castle For Christmas (11/26). This one we’re into simply because it stars Brooke Shields and Cary Elwes, and centers around an American who dreams of buying her own Scottish castle with Cary Elwes as its grumpy (yet appealing) owner/Duke. Get in line, Brooke!

Our picks for titles we’re psyched to see are bolded and italicized.

Lords of Scam — NETFLIX DOCUMENTARY
The Harder They Fall — NETFLIX FILM
In this Western, outlaw Nat Love (Jonathan Majors) discovers that his enemy (Idris Elba) is being released from prison, so he reunites his gang to track down Rufus Buck and seek revenge.

🎁 Father Christmas is Back — NETFLIX FILM

Animal — NETFLIX DOCUMENTARY
Gentefied: Season 2 — NETFLIX SERIES
Passing — NETFLIX FILM
Based on the novel by Nella Larsen, the movie follows two black women (Tessa Thompson, Ruth Negga) who can pass as white and choose to live on opposite sides of the color line in 1929 New York.

Mariah Carey’s All I Want For Christmas Is You

Netflix Book Club (launching November 16) – A one-of-a-kind book club where readers will hear about their new favorite books, films and series adaptations first – and get exclusive access to the process behind bringing these books from page to screen. Host, three-time Emmy Award winner and star of the hit series adaptation Orange Is the New Black Uzo Aduba will announce monthly book selections that will be making their way to Netflix and host conversations about the adaptation process with cast, creators and authors. First up, Nella Larsen’s Harlem Renaissance-era novel Passing which will coincide with the new Netflix movie adaptation November 10. Directed and written by Rebecca Hall and starring Tessa Thompson and Ruth Negga, Passing follows the story of two Black women who can pass as white and choose to live on opposite sides of the color line in 1929 New York. The Netflix Book Club series will kick off on November 16 on the Still Watching Netflix YouTube Channel and the Netflix US Facebook channel.

🎁 Christmas Flow — NETFLIX SERIES
Prayers for the Stolen — NETFLIX FILM
The Queen of Flow: Season 2 — NETFLIX SERIES
Supergirl: Season 6 (new episodes)
Tear Along the Dotted Line — NETFLIX SERIES
Tiger King 2 — NETFLIX DOCUMENTARY
Didn’t think there could possibly be any more twists and turns to this story? Oh, ye of little faith. Tiger King returns with a second season that digs further into the mysteries and personas that captivated audiences and launched the careers of a thousand armchair detectives.

🎁 Blown Away: Christmas — NETFLIX SERIES
Cowboy Bebop — NETFLIX SERIES
A ragtag crew of bounty hunters chases down the galaxy’s most dangerous criminals. They’ll save the world … for the right price. A live-action series.

🎁 A Castle For Christmas — NETFLIX FILM
Famed author, Sophie Brown (Brooke Shields), travels to Scotland hoping to buy a small castle of her own, but the prickly owner, Duke Myles (Cary Elwes), is reluctant to sell to a foreigner. Working to find a compromise, the pair constantly butt heads, but they just may find something more than they were expecting.
Dig Deeper: The Disappearance of Birgit Meier 🇩🇪 — NETFLIX DOCUMENTARY
Green Snake 🇨🇳 — NETFLIX FILM
Light the Night 🇹🇼 — NETFLIX SERIES
🎁 School of Chocolate — NETFLIX SERIES
Spoiled Brats — NETFLIX FILM

14 Peaks: Nothing is Impossible — NETFLIX DOCUMENTARY

Did we miss highlighting something you’re anticipating? Disagree with our picks? Let’s talk in the comments.