What We Should Have Learned From Jurassic Park

The Internet is Jurassic Park IRL. 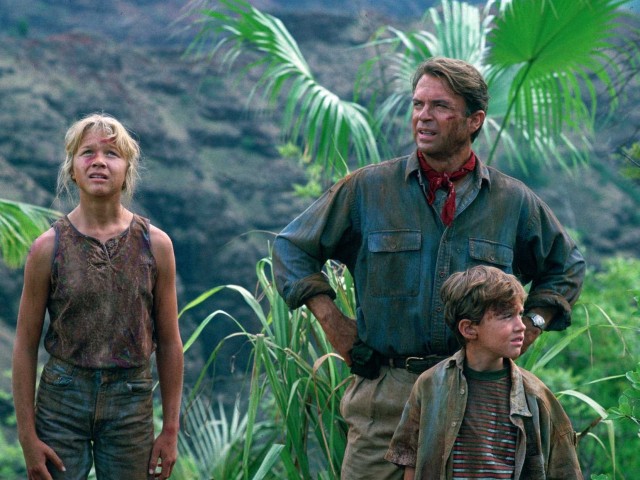 My least favorite part in the novel, Jurassic Park by Michael Crichton, is when the little girl looks to Alan Grant and says, “I think riding a dinosaur would be fun.” Instantly I thought, well clearly this is how she’s going to die. Never have last words been more obviously scripted. I awaited her fate. It would be natural selection, despite the unnatural circumstances, surely. Any human being, child or no, witnessing a Tyrannosaurus eating several other human beings and almost becoming a victim herself, who would then look to another dinosaur and think, “but no, I think this sounds like a good idea” should be taken out of the evolutionary equation. The history books of the post-Jurassic Park world would say something to the effect of, “humans who survived were the ones that learned obvious lessons with minimal trial and error experimentation. The rest perished because they were idiots.”

But the little girl didn’t die; natural selection couldn’t take place because it already had. Jurassic Park only existed because a group of people scoffed at the evolutionary process and said, “but nah, you know? Dinosaurs! We’re gonna do it anyway.” But at least this is a work of fiction, right?

Well, in the non-fiction world, we have created a Jurassic Park of our very own and it doesn’t even have dinosaurs. I don’t know how, but that feels worse to me.

The Internet community is the Jurassic Park of our society. Both manmade inventions which began as really cool theories executed with enthusiasm and precision, and they were complete disasters from the start. Just like Jurassic Park couldn’t defeat the senselessness of the “let’s ride a stegosaurs to safety” mindset, the Internet, or more specifically social media, cannot eliminate the less desirable traits of its users in a rapidly developing environment. With a lack of understanding of the creation by those leading the way, coupled with under-education and over-reliance on ideologies of its users, we have devolved our online environment into a world where of course the T. rex is eating everyone. Why wouldn’t it? It’s what T. rexes do.

One of the main struggles in the world of Jurassic Park which directly mirrors our digital community are the procreating velociraptors. See, the Internet as we know it today is really not that old. Websites like Friendster and MySpace, pioneers in the social media game, both got their starts in the early 2000’s, barely over a decade ago. And originally, we were all in the same boat – we came from a world with no Internet and were learning to traverse the vast expanse of it together. But in the last ten years, the world has gone from analog comments section, oft referred to as “the peanut gallery” by many a middle school educator, which were small, containable groups, to things like Facebook, Twitter, and Reddit, oft referred to a “the fifth circle of hell” by many (myself included), which are endless and unmanageable. And in the midst of it all, the juvenile velociraptors, the new users of the web, have been born in the wilds of a virtual world filled with infinite connectivity and vicious, poisonous interactions.

There is limited education for children and teenagers when it comes to the World Wide Web and how to operate within its social structure. Why is that? Well, mostly because the majority of educators do not themselves know much about it. The double-edged sword of technology, specifically of social media applications and communities, is the rapid growth and flux that the digital environment is constantly operating within. The way we use classrooms to teach children how to share, work together, and interact with others needs to exist for the digital community as well, but it doesn’t. We simply let parents, who are only as educated on the issue as they care to be, deal with what their child knows or doesn’t know about the Internet. There are organizations, such as the National Cyber Security Alliance, that have set up online education workshops for parents, or i-Safe, which provides resource material for educators for online safety, but the curriculum is geared more towards cyber safety than cyber etiquette. It’s as if we are providing all the information in the world as to how to avoid the Tyrannosaurs, but none on what to do if you actually run into one.

As we saw from Alanah Pearce’s experience, her antagonists weren’t adults – they were middle school boys. They were juvenile velociraptors who thought threatening to rape or kill a stranger on the Internet was a game everyone was playing. We introduced the dinosaurs to the wild, and then they made little raptors and let them go, and now we’re confused when they begin to hunt us down and devour each other. We built something we didn’t fully understand, we gave it to other people who didn’t fully understand it, and now everyone is eating each other and all we can do is try to get the electric fences back up and hope that the mean ones die off soon.

Really, that’s all we can do – because the other issue both Jurassic Park and the Internet struggle with is the lack of appropriately dosed tranquilizer darts. In the park, this is meant quite literally. Online, the tranquilizer darts come in the form of legal ramifications for inhumane and unlawful behavior. Juvenile velociraptors are, for the most part, quite harmless, but when they grow up in a world where they think hunting and eating people is not only acceptable but also sort of fun, there’s a big problem. In defense of the dinosaurs, well, they’re dinosaurs. That’s sort of their thing. But harassment and cruelty is not, or at least should not, be a human being’s “thing.”

The longer we fumble around with the legal system and neglect to educate law enforcement on procedures for handling online harassment in social media, the quicker this behavior becomes synonymous with our culture. As we have seen from online posts from women like Anita Sarkeesian and Brianna Wu, law enforcement is incapable of handling the realities of online harassment. They don’t have a system for it, they don’t have the technology, and they don’t have the education. Until someone physically puts his/her hands on another human being, it is often said that no crime has been committed. Virtual terrorism, which is a completely accurate way to describe what these women have endured, is simply not illegal in many countries. It’s frowned upon. States in the U.S. are only recently beginning to add language to existing statutes that define online stalking and harassment as illegal, but there have been very few cases enforced, as the interpretation of such occurrences is easily disputed.

We are in a cultural shift with a culture which is dead set in denying the changing paradigm. Essentially, the system has broken down. The creator of Jurassic Park, John Hammond, states at one point in the book:

…since it was so exciting, and since it was possible to do it, we decided to go forward. We got this island and we proceeded. It was all very simple.

And Dr. Malcolm, who has argued against the existence of stability on an island such as the one Mr. Hammond has created, cannot stand it anymore.

“What is that going on out there?” he said. “That’s your simple idea. Simple. You create new life-forms about which you know nothing at all…You create many of them in a very short time, you never learn anything about them, and yet you expect them to do your bidding because you made them and therefore you think you own them; you forget that they are alive, they have intelligence of their own…

We have built an incredible thing with our interconnected global community, and yet, for the most part, we understand a mere fraction of what it is capable of, and what it can do in the hands of free will. We cannot fix the social network as the Costa Rican Coast Guard “fixed” Jurassic Park. We can’t just decimate it, though on more than one occasion I have wanted to petition society to just shut the whole thing down. I’ve wanted to say, if you cannot behave like civilized beings online, then you are no longer allowed to connect. You are banished. You are naturally un-selected from the Internet. 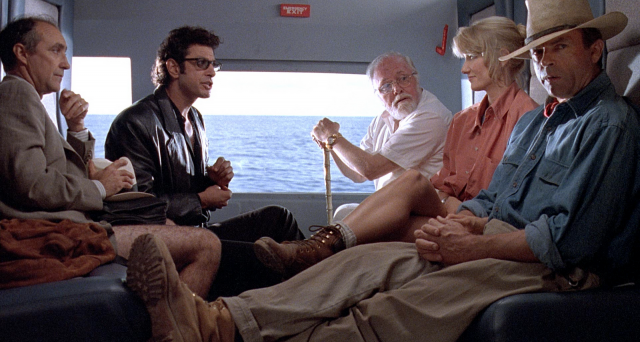 Sadly, we can’t tranquilize the trolls and doxxers with a rocket launcher. That would be much easier. Instead we have to work within the system with the tools at our disposal: education, proper enforcement of clear legal parameters, and a preparedness to lean in to new advancements, rather than attempt to look the other way until the problems become so insurmountable that the island of the World Wide Web cannot contain them anymore. Until someone, offline, gets hurt. The truth of the matter is that Jurassic Park couldn’t have gone any differently, on account of the fact that there was probably no way to implement a crime and punishment protocol for the dinosaurs, but our online community doesn’t have to meet the same fate.

If the last ten years has taught us anything, it should be the responsibilities of advancements in technology, in science, and in our global community do not end with the creation of the product itself. There needs to be a continued effort from the creators and the users to manage solutions for new problems that will inevitably arise with each step forward. The very essence of our humanity should be reflected in all we do – in the physical world and in our digital community.

All that said, if someone wants to design a tranquilizer dart emoji just in case, now would probably be a good time.

Eleanor Thibeaux is a San Francisco Bay Area-based writer and audio post-production engineer originally from the Lone Star State. A tech geek, science fiction/fantasy fanatic, and dessert enthusiast, Eleanor is the kind of Type A person who puts “finish season 4 of Battlestar Galactica” on her to-do list. It’s important to have priorities. You can find her other works via her website, or follow her every important thought on Twitter: @ethibeaux