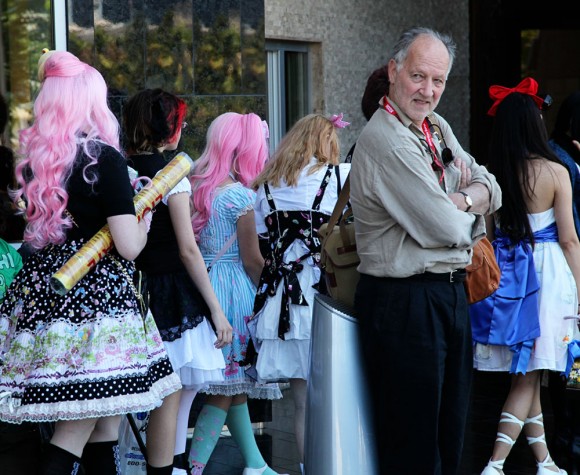 German filmmaker Werner Herzog was spotted at San Diego Comic Con. He wasn’t part of a panel, he wasn’t an invited guest, he was just hanging out there. And guess what? It was his first Comic Con! How fun is that? Thinking his friend and frequent collaborator Erik Nelson was taking him to a professional business convention, Herzog was positively delighted to have been shown otherwise! We’re excited for him, you guys!

Herzog, who famously ate his shoe at the 1978 premiere for his film Gates of Heaven and then let Les Blank make a documentary out of that (he also played himself in an episode of The Boondocks), is not your typical Comic Con customer, which made the event even more exciting for him. Especially since he was expecting to see a bunch of guys in suits. Says Herzog:

“I have never seen the collective dreams all in one place.”

Herzog’s guide, Erik Nelson, actually was on a panel to promote his Discovery Channel series, Dinosaur Revolution, which is “an insider’s view of the private lives and strange behavior of dinosaurs.” Nelson and Herzog are currently working on a documentary about death row inmates that has been so rough that the latter has taken up smoking again. We’re glad he got to take a break and hang out with some more chipper types.