We Need Another Dana Scully 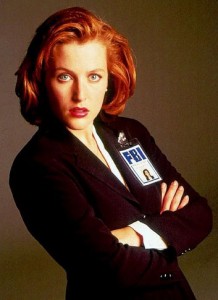 Only a little while ago I was putting together a certain list-based post for a certain other geek blog, and got to revisit the X-Files, and suddenly remembered that FBI Agent Dana Scully exists.  After months of thinking about female geek role models for the site, you’d think she would have occurred to me earlier, but I suppose that’s a product of loving the X-Files but being just a little bit to young to actually watch it when it aired.

(I’m not that young, it’s just by the time I got over being traumatized by the opening scene of El Mundo Gira and started watching it regularly, it was the season that Mulder left and was replaced by the T-1000.)

But it’s hard to think of another skeptical, professional, socially and physically capable, M.D. awarded, female character who had sex appeal without it being a defining aspect of their character who has appeared since, in television or movies, and even if you can name a few, it’s only a few.  And as you might have guessed, that fact is the subject of the thing I will presently link you to: Sophie Brown‘s essay Why Today’s Women Need Dana Scully.

The question remains, where are the positive role models for the next generation? I don’t doubt that they are there somewhere; The Harry Potter series’ Hermione Granger alone is as positive a role model as one could hope for, a girl who is not afraid to be cleverer than the rest and who uses her brains rather than her looks to get her through life and save the world. But when we look around at other hit movies, I begin to feel that fear all over again. Twilight’s Bella Swan is the worst example of a role model I’ve yet seen, seemingly unable to function without at least one male crutch to keep her upright. Other films such as “Scott Pilgrim Vs the World” feature women that stand on the sidelines, allowing men to fight their battles for them or, in the case of Knives Chau, seemingly living their whole lives in pursuit of a man.

The Huffington Post recently ran an article discussing how television has been “a gold mine for three-dimensional female characters for the last twenty years” and they have a lot of valid points. Whilst women on the big screen simper and fawn over men and the need for another pair of shoes, their small screen counterparts are busy solving crimes, saving the world and generally fighting the good fight. Characters like Dr. Temperance Brennan (Bones) and Catherine Willows (CSI) are intelligent women capable of existing in their own rights, not just as sidekicks or pretty faces to brighten up the office. However for me, they will always pale in comparison to the original small screen heroine, FBI Special Agent Dr Dana Katherine Scully.

You can read the whole thing over at GeekMom.