Exclusive: An Interview With Love and Capes Creator Thom Zahler 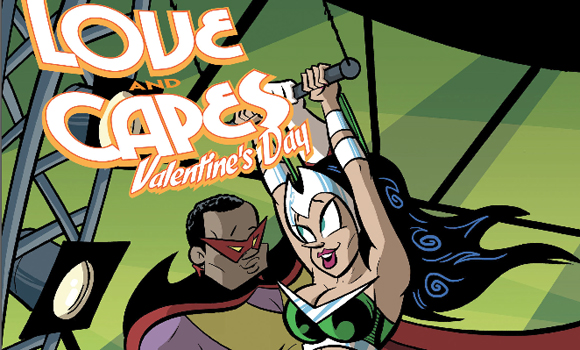 We’ve got something very special for you all today. An exclusive interview with Love and Capes creator Thom Zahler just for TheMarySue.com readers!

Zahler has done a lot of work in advertising, he’s created for Marvel Comics, and has been self-publishing his own work for years. His rom-com superhero title, Love and Capes, has had great success and was recently picked up for publication by IDW. And, for the first time ever, Love and Capes is now available digitally. Want to know more about Zahler and his work? Check out the interview and then download our exclusive of the Love and Capes Valentine’s Day Special for free for a limited time.

The Mary Sue: For those who aren’t familiar, give us a little background information on your comic Love and Capes? How did it start?

Thom Zahler: In 2005, I wrapped up working on my Raider series, and I was looking to move on to something else. About the same time, Bravo had a Project Greenlight-like contest for sitcom pilots. I wrote a romantic comedy and found that I really liked that genre. And I was looking for something a little more cartoony, a little more fun for my next comics project. From there, it was just that chocolate and peanut butter moment. “You got your romantic comedy in my superhero book!”

TMS: Who or what were your inspirations for the work?

TZ: Obviously the Superman/Lois Lane archetype is the big one. I think there’s a lot to play with there. And I wanted to do the opposite of what they did in the comics. Well, Superman in his pre-reboot history. He got engaged to Lois and then waited six months before telling her that he was Superman. You’d think that would get covered a little earlier.

So, I thought that the point where you start to trust someone was very interesting. When do you tell your special someone about your secret?

The other big influence was Paul Reiser’s Mad About You. I always liked the chemistry between Paul and Jamie, and their friends and family. I’ve often described the book as Mad About You if Paul had super powers.

TMS: Tell us a little about your characters and the world they live in. Considering you’re dealing with superheroes, how realistic do you like to keep your plot lines?

TZ: The relationship is the focus of the book, and I try to keep that as real as possible. They tease each other, get irritated with each other, take care of each other. That all has to read as true as I can make it.

I try to keep the stakes for the superhero aspect as real as possible, too. When the world is in danger, the world really is in danger. But I try to keep the threats away from anything that’s too comedic. I love The Tick, but you won’t see El Seed getting together a plant army in my book. They’re stopping real robberies and saving real lives.

There have been a couple moments that I thought worked really well. Abby gets powers in issue #10, and there’s some very real, somber moments along the way. And in issue #5 of Ever After, my characters actually discuss mortality.

And just because something’s serious doesn’t mean you can’t still crack a joke about it.

The plots tend to be grounded in real life. Setting up your sister, babysitting someone’s kid, planning a wedding and so on. The hero stuff is just as serious, but it’s usually off camera or underplayed.

TMS: As a creator trying to get your work out to the masses, what was it like getting picked up by IDW Publishing?

TZ: Being with IDW has been great! They’ve been very supportive, and they’re great at doing all the publishing stuff that I’d rather not do. Fulfilling orders, getting together with Diamond for solicitations, talking to printers… I can do all that, but I’d rather give it to someone else.

I think I did a pretty good job promoting the book when it was self-published. Being part of Free Comic Book Day, and doing an original story each time, certainly got me a ton of attention. But being in the IDW section in front of the book and having the force of their brand backing me up, that’s been wonderful.

TMS: Does the current state of the comics market influence your story lines or are you the kind of creator who has his characters’ lives planned out from the get-go?

TZ: I look at it like a TV show. I write the “sweeps week” events, and I always know the ending before I start, but I fill in some of the blanks as I go. It helps keep it fresh while I still know ultimately where I’m headed.

I throw in some tweaks to the industry and its events as I go. But that won’t stop me from making a “One More Day” joke when Mark and Abby sign the contracts to buy their house, or make a comment on legacy characters when Windstar dies. And there’s definitely a joke about crayon-colored superbeings coming up.

But I try not to be mean about it. It’s just important that we don’t take ourselves too seriously.

TMS: And tell us a little bit about your Valentine’s Day special. Was that a no-brainer considering “love” is already a bit part of your comic?

TZ: Promoting the book on Valentine’s Day is a no-brainer. It’s like the title is tailor-made to get notice on that day. And if you’ve got a natural hook like that, you need to grab a hold of it with both hands. Marketing is a huge, and often overlooked, part of our industry.

I knew I wasn’t going to have the new series ready to go in time for Valentine’s Day, and that’s not necessarily a bad thing given that preorders would have had to happen back in December. But I didn’t want the day to pass without borrowing some of its shine. And digital has come a long way. So being able to put out new, free content that gets me a little spotlight and reminds people to keep a look out for the series’ return later this year was an opportunity to perfect to pass up.

TMS: Thanks so much for your time, Thom and thank you so much for sharing your new comic first with our readers.