Panning the anime stream to bring you the year’s shiniest gold nuggets. 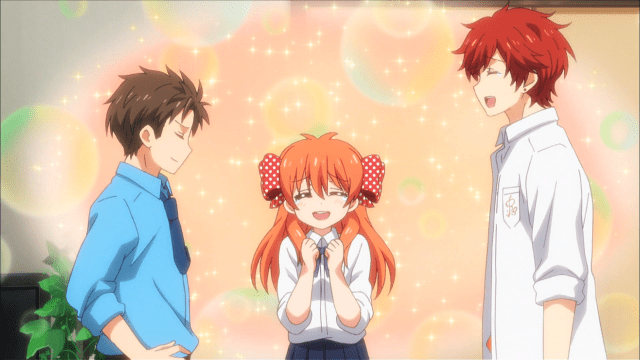 The following was originally posted on Dee Hogan’s blog The Josei Next Door and has been republished with permission. Check out Part One here!

As a reminder, all shows that ended in 2014 are eligible for this list, including sequels, even if they began their run in 2013 or earlier. Ongoing series (like Parasyte or Aldnoah.Zero) will be eligible in 2015.

So here we go, my picks for the best shows of the year! Drums rolled? Fingers crossed? Angry comments about the series I didn’t include typed and at the ready? Perfect. Let’s do this thing. 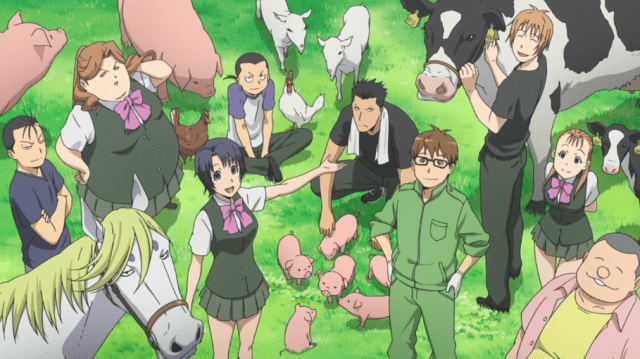 In a Sentence: Fleeing the pressures of home, Hachiken Yugo enrolls in an agricultural high school, where he learns that “the simple life” is nothing of the sort.

This one’s based on the manga by Hiromu Arakawa of Fullmetal Alchemist fame, and while the two series couldn’t be more different in terms of subject material, pacing, and tone, she brings her singular talent for crafting immediately likable, diverse characters whose interactions can drive a story forward, leading to moments of great comedy and moving drama alike.

Arakawa has a knack for writing teenagers (both boys and girls) in a way few anime/manga creators do, as she understands the balance between child and adult, between the exuberance (and occasional idiocy) of new freedoms and goals and the somberness of new responsibilities and compromised (or lost) dreams. Physical attraction and romance aren’t a major part of GnS, but when they do happen it’s as well-balanced as any of the other character beats, neither ignoring sex drives nor making them the be-all end-all of the characters (if only other writers could strike this balance half as well as Arawaka does).

Silver Spoon is a “slice of life” in the best sense of the word, focusing on the daily lives of Hachiken and his classmates as they learn to milk cows, raise pigs, and come to understand one another’s hopes, fears, and ambitions along the way. It’s more premise than plot, but there’s definite movement and development from Hachiken and his classmates as they grow and change and deal with the difficulties of both adolescence and the agricultural business. It’s just great character-driven storytelling, thoughtful and funny and compassionate, and it’s mighty hard not to be charmed by this series. 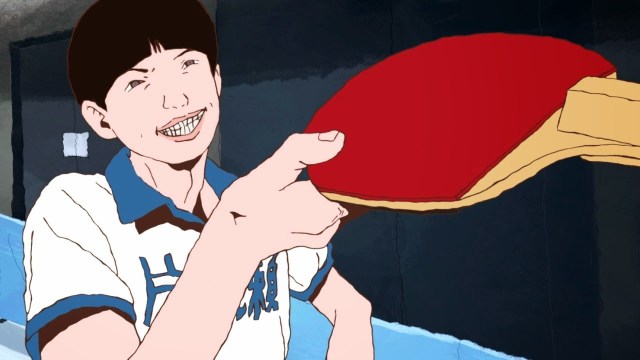 Available on: Funimation (U.S./Canada); Crunchyroll (the list of regions is too long to list, so here’s a link)

In a Sentence: Smile and childhood from Peco navigate the fiercely competitive world of table tennis in this coming-of-age sports series.

You know it’s a top-heavy year when a show like Ping Pong doesn’t clear the Top Three, but make no mistake: this is an excellent series, singular in both its art and its approach to the sports genre as a whole. Original mangaka Matsumoto Taiyou (Tekkonkinkreet, Sunny) and director Yuasa Masaaki (The Tatami Galaxy, My Neighbors the Yamadas) take us into the darkly absurd world of competitive sports—and the moment when we begin to shift from “play” to “work”—with stylistic flair, a sprinkling of cynicism, a dash of dry humor, and an exquisite understanding of their characters’ histories and personalities.

More psychological study than sports drama, the series spreads its focus out across multiple individuals (competitors and coaches alike), and the table tennis matches tie into the character’s personal journeys as well as the thematic ones—exploring adolescence, isolation, the “victory” ideal, and what it means to be a hero. Director Yuasa tackles the series with his signature “ugly” style, using sharp lines, swathes of black, and splashes of sharp color to create a world both alien and familiar, contorted and grim and occasionally, stunningly beautiful. The “Christmas Karaoke” scene from Episode 6 is one of the best directed moments of any show this year, simultaneously heartwarming and heartbreaking, using music and images rather than dialog to tell multiple interlocking stories.

I came into Ping Pong late, burned through the first eight episodes in two days, wrote a Nice Long Essay about it, and even gave it the edge over the first half of Mushishi, pegging it as the best series of the Spring season. I adore this series for its deconstruction of the sports genre and detailed character analyses, and the older woman who runs the table tennis dojo (known only as “Obaba”) was one of my favorite female characters of the year. Honestly, the more I think about it, the crazier it is that this show isn’t in my Top Three. But I guess that just speaks to the strength of those other shows, rather than the weakness of this one. A top-heavy year, indeed. 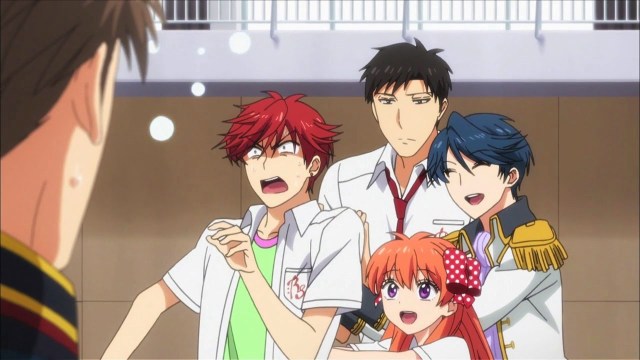 In a Sentence: After a love confession gone awry, Sakura Chiyo ends up working as an assistant on the popular shoujo manga Let’s Fall in Love – which just so happens to be written by her crush, Nozaki Umetarou.

Confession time, folks: Within this Serious Objective Reviewer lurks a subjective anime fan, and she is flailing her arms and smacking me over the head for not giving Nozaki-kun that #1 ranking. Deep down I know it’s not the best show of the year, but man, there is no question that it’s my favorite.

That said, it’s also very deserving of making the Top Three, as in addition to having an across-the-board charming cast and consistently hilarious stories (boxes! tanuki! TOMODAAAA!), it was also one of the smartest and most subversive anime to hit the air in this or recent years. I’ve discussed Nozaki-kun so much at this point that I run the risk of repeating myself, but I really can’t stress enough just how difficult it is to do what this series did in how it explored gender roles, tropes, the manga industry, and how fiction affects our understanding of the world. It’s one thing to do sharp satire, and it’s one thing to craft a feel-good comedy, but it’s another thing entirely to manage both, creating a series that can draw in a wide audience while also encouraging them to (re)consider their assumptions in media and real-life interactions.

There’s an unfortunate tendency to write comedy off as “less than” or “easier than” drama, which is probably why I feel the need to sing this show’s praises as loudly as I do, because the importance of what’s happening here isn’t something we should downplay just because it’s happening with a heaping helping of silliness. Nozaki-kun’s ability to acknowledge real-world problems in fiction (particularly manga/anime) while also presenting us with an alternate reality where people cheerfully subvert gender expectations (and everyone’s pretty much okay with that) is really something special, and for that as much as for the flailing fangirl inside of me, this series wins the bronze medal for 2014.

You can read my Series Review(and my Nice Long Essay) for more. 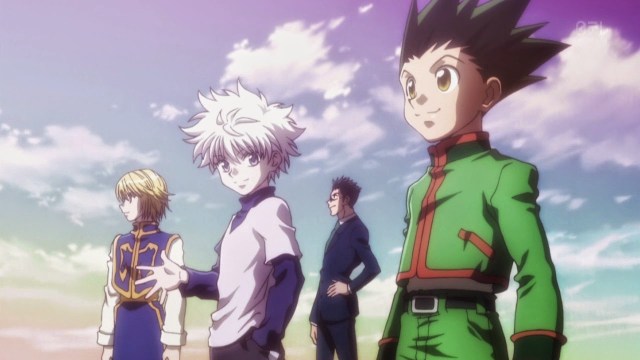 In a Sentence: 11-year-old Gon Freecs leaves home to become a Hunter like his absent father before him, and if you think I can summarize 148 episodes in a sentence, you got another thing comin’, bub.

Hunter x Hunter wasn’t just one of the best shows of 2014—it was also one of the best shows of 2012 and 2013, as it ran more-or-less nonstop for three years and displayed remarkable consistency, both in terms of content and animation quality. The story flows logically but often unexpectedly from one event to the next, characters grow and mature, the world expands in surprising ways, and somehow all of this happens with continually great animation, well-integrated music, and excellent vocal performances from lead and supporting actors alike.

There are a lot of things to like about this show, from its intricate plots to its energetic, easily marathon-able pacing and tone, but the great strength of HxH is its characters. Mangaka Togashi Yoshihiro (of Yu Yu Hakusho fame) populates his world with an ever-growing cast of fascinating people across all genders (the early episodes are a bit of a boys’ club, but the series remedies this as it goes, and even includes a character who is heavily implied to be trans), and it’s these people who form the core of the story. No matter how big the threats and the powers-ups get, HxH never forgets that it’s the people who make history, and that no person is insignificant, static, or without layers.

Basically, this is the long-running action/adventure anime adaptation that other long-running action/adventure anime adaptations aspire to be: Always interesting, progressively more complex and ambitious, and totally lacking in filler. Add to all of this that the Chimera Ant finale—arguably the show’s finest hour—aired in 2014, and HxH more than earned this #2 slot.

You can read my Series Reviewfor more. 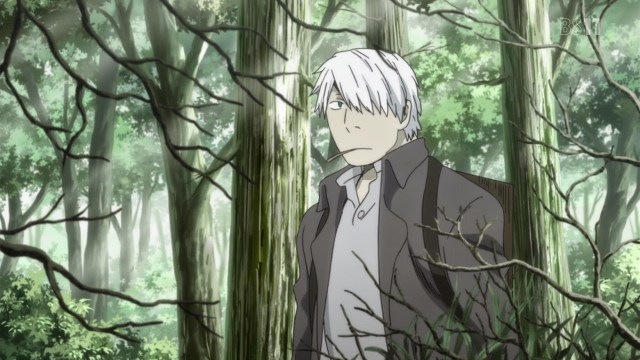 Season Episode Count: 20 (21 if you count the mid-season special “Path of Thorns”)

Series Episode Count: 48 (including the OVA)

Note: Crunchyroll does not carry the original 26-episode Mushishi anime. It’s available on Funimation and Hulu (U.S./Canada), and also in a very cheap S.A.V.E DVD boxset.

In a Sentence: A sequence of loosely connected short stories about a world where humans coexist with strange creatures called “mushi,” and the wandering mushi expert (“mushi-shi”) Ginko who works to keep the two spheres in harmony with one another.

Content Warning: Some of the stories do touch on grimmer subjects such as abuse, mental illness, and violence, but these topics are always explored thoughtfully and never for shock value, so I encourage you to give the show a try regardless.

I said in a previous review that at a certain point you run out of adjectives to describe a show and just start throwing confetti at it, and I’ve pretty much reached that point with Mushishi. Few series in any medium explore the full spectrum of human psychology, experiences, and relationships (both between two people and between humanity and nature) quite like this series, using the (super)natural world of mushi to literalize intangible thoughts and emotions. Few series understand the value of silence and empty spaces, of understatement and minimalism, of exploring complex ideas with subtlety and sympathy, presenting but never overtly moralizing. And even fewer series can take an excellent manga and turn it into something even better, blending the original writing and art with quietly expressive vocal performances, lush, ephemeral backgrounds, and a meditative musical score.

Simply put, this is a top-tier show, easily the best anime of the year and one of the greatest anime ever made. If you’re not watching it already, you’re missing out on a lovely, haunting, and utterly unique experience. This is a show meant to be savored rather than gobbled (I’d recommend 1-2 episodes a week as the optimal way to watch it), but it’s well worth every bite.

There’s simply no other show quite like it, and its existence is proof of the incredible artistic heights anime can achieve, and why—for all its flaws—I’m still so enthralled by this medium and the stories it can tell. Here’s to another slew of memorable, exciting, and moving tales in the coming year as well.