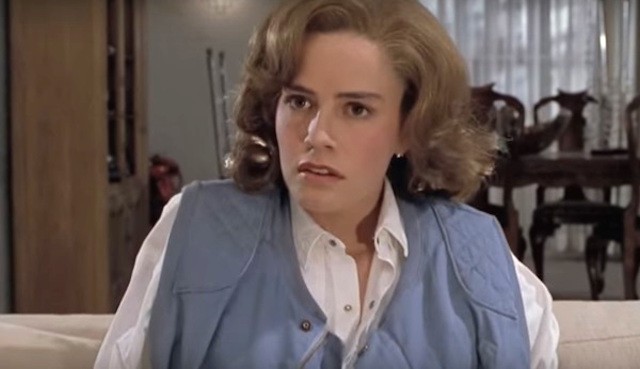 So, like a lot of people, I re-watched Back to the Future Part II recently in honor of “Back to the Future Day.” While it’s undeniably a fun and enjoyable film from a trilogy I have always loved, here’s an issue with Back to the Future II that I just simply couldn’t avoid: the writers utterly failed to deal appropriately—or intelligently at all—with the character of Jennifer, Marty’s girlfriend, in the second film of this series.

There are a few articles out there on the web that try to discuss this issue, but I feel most of them fall woefully short of the mark. Legend has it that writers Bob Gale and Robert Zemeckis didn’t expect there to be any sequels to the first film when they originally wrote its ending—in which Doc comes back from the future in all panic and urgency to take Marty to the future to rescue his and Jennifer’s kids from some terrible fate. The first film ends with Doc readily agreeing to take Jennifer along with them, saying, “Bring her along; this concerns her, too!”—a reasonable acknowledgement of Jennifer’s importance in their future and the lives of their future children, and a hopeful look towards including a female main character in the next adventure, whatever that may be.

However, this is NOT what happens. As has been pointed out several times by Internet critics, as soon as we get to the second movie, all of a sudden, Doc seems to completely and spontaneously forget his progressive, forward-looking plan of including a woman with an equal stake in the end-game on their adventure. Within the first few minutes of the movie, Doc busts out a sketchy gadget and hypnotizes Jennifer into a comatose state when she starts “asking too many questions.” Odd, rude, and decidedly out-of-character for the lofty, good, and idealistic Doc Brown.

Then things get even weirder. Doc’s first move is to … abandon Jennifer in a pile of garbage in a strange alley in a strange future. WHAT!?

Seriously, that is literally, exactly what happens. Can you explain this? It isn’t even clear why her unconscious form can’t just, I don’t know, stay in the car, where it’s at least enclosed and relatively safe. Though Marty objects to this plan—quite reasonably and rightfully!—the fact that he allows himself to be assuaged by Doc’s illogical insistence that “She’ll be fine! It’s only for a few minutes anyway,” is really hard to swallow. Of course, she’s not fine—it’s not safe for a woman (or ANYONE!) to be left unconscious in an alley. Luckily, the first people to find her there are the police—and not, say, Griff’s gang, or any of the various scary-looking power-hover-board marauders of the future. Quite reasonably, the police immediately recognize and assess that Jennifer is unsafe where she is, left alone and unconscious in an alley, and very fortunately, they do their best to take her “home.”

Of course, her “home” is the home of her future-self, where she hides in closets observing what futuristic losers everyone has become, until ultimately seeing her older self and, yet again, passing out. Jennifer spends SO much more of this movie unconscious than conscious that it really feels quite egregiously like the writers just had no idea what to do with her, and instead of being intelligent and creative with the character, simply came up with the laziest device imaginable: knock her out and ditch her repeatedly, and just simply hope that no one notices or cares how incredibly illogical, unrealistic, or troubling this is.

Finally, Jennifer is back in the company of Marty and Doc. Now she’s going to wake up and finally be a part of this adventure, right? … Right? WRONG! Instead, they time travel back to 1985—AND ABANDON HER UNCONSCIOUS FORM IN YET ANOTHER OPEN AREA! OMG! Again, this is Doc’s plan. Again, it feels very odd, unsafe, and strangely out of character for him, and again, Marty objects to it but ultimately defers to Doc’s insistence that she’ll be fine, in spite of the fact that she wasn’t fine the FIRST time they did this (earlier the same day!), and it is obviously a really, really terrible thing to do.

Almost immediately, Marty comments that he doesn’t remember bars on the windows of Jennifer’s house (on the porch where they leave her), which seems rather a large red flag: one doesn’t just leave a person unconscious on her porch if the neighborhood is apparently rough enough to warrant bars on the windows, but it gets EVEN WORSE.

Marty goes back to his own house, only to discover more unfamiliar locks, and the fact that his family doesn’t live there—instead, the house is owned by another family, and they immediately take him for a burglar (or, by the dialogue, seemingly some kind of real-estate-company-terrorist that apparently exists in this dystopian version of 1985). The scary, “not-in-Kansas-anymore” scenery of run down buildings, destroyed cop cars, chalk outlines of murder victims, and so-on seem now to come gradually out of the woodwork, and Marty realizes this isn’t the 1985 he left behind.

So, given that, you’d think Marty’s first move would be to run back to where he left Jennifer, and make sure she’s OK. But no. From this point on, the writers just kind of … hope you forgot about Jennifer. Realistically, I can’t imagine Marty not dashing back to her side immediately; it’s actually really hard to believe that a guy who cares about his girlfriend as much as Marty does (or at ALL, for that matter), who just left her unconscious form open and unprotected and alone—and was uncomfortable doing so in the first place—would be just fine leaving her there now that he has discovered that there is actual imminent danger all around them. It’s just sort of … lazy script writing, you know?

From that point on, we do not see Jennifer ever again, until the third movie. In fact, they abandon her there in dystopian 1985, go back to 1955, and delete the timeline in which they left her. According to Doc, this isn’t murder, because “reality around her will change when they change the timeline,” which is a hopeful thought but pretty inadequate considering Doc’s record with her safety. Besides, is Doc really sure this is how it works? It kind of just feels like he’s saying it as a convenient excuse, not really knowing what’s going to happen. Considering how fluid, hard to control, and hairy time travel has already proven itself to be in this and the previous film, it just seems kind of insane and unbelievably irresponsible to abandon her like that in a future whose existence you’re going to delete, and just whistle and hope that everything will turn out hunky-dory …

See, the only plausible in-canon idea that presents itself to me to help explain Doc’s seemingly targeted negligence with Jennifer’s unconscious body is the idea that he’s super jealous of her because of how much Marty loves her, and he wants Marty all to himself. It really is the only thing that makes any sense; that, or he’s an absolutely horrible woman-hater, but this possibility is contradicted by his behavior towards women in the other two films. So, best case scenario, Doc is jealous and actively hoping something horrible will happen to Jennifer out of spite … ? Truth told, I disagree with this interpretation, even though it is my own, because I feel like this, even given that it is by far the most logical explanation I can come up with to make Doc’s behavior in this film make any sense at all, is just not in his character. Even if Doc were that jealous of Jennifer, I just don’t think he, being the lofty, high-minded, good character he is, would be that evil, small, and vindictive, no matter what. It simply goes against the fabric of his nature, against the core fiber of the character himself.

When a team of screenwriters falters, there are significant plot holes that can’t be explained by any amount of interpretive logic or theorizing from the fanbase. But when a team of screenwriters really fail, we find ourselves actually noticing the screenwriting process itself. Unable to explain the multiple, egregious lapses in logic, we throw up our hands and say, “It’s just script-writing!” This is perhaps the worst condemnation of the screenwriting craft that can be served to a writer; when the process by which writing occurs is revealed symptomatically by how poor the writing is, that’s when we have a real problem.

See, it feels like they didn’t know what to do with Jennifer. Good writing would have at least masked this and, at best, provided a different, more creative approach that would have made her character a necessary and logical inclusion, like the end of the first film promises. The end of the first Back to the Future movie suggests some plot in which Jennifer is necessary to help save her and Marty’s kids from some terrible fate. My knee-jerk instinct is to expect a plot in which future Marty and Jennifer are important, powerful people (maybe Marty and Jennifer become HUGE multi-billionaire rock icons, maybe one of them is the president of the USA, etc.) and evil future-terrorists kidnap their kids (who are perhaps actual children not played by Michael J. Fox), in a plot that involves young Marty and Jennifer teaming up with their more powerful (though perhaps worried and heartbroken) future selves to rescue their children in a way that proves everyone badass and awesome and heroic. Perhaps it even deals with the sad truth that future-Marty has been dealing with the death of Doc Brown for years, an aspect of time-travel that we all have to face as we move, ever so slowly, forward into the future.

But that’s just one way to go. There are infinite, satisfying possibilities of good screenwriting to be had, provided that one isn’t bound by ridiculous parameters.

The writers of Back to the Future II, whether commanded by studio heads or deciding to do so of their own accord, seem to have had the agenda of trying to check a lot of boxes that may have made a much better film if left unchecked. First of all, it is clear that for whatever reason, they wanted to re-visit and re-hash the exact events of the first film, riding on the coattails of their own success. While this seems awkward and somewhat lazy, it is ironically perhaps the best part of the film, possibly because we are no longer biting our nails over Jennifer’s distracting lack of consciousness and safety, or possibly because this part simply reminds us of the previous, much better movie.

Also on the checklist seems to be to showing the high-tech future and the dystopian present, which aren’t bad goals in themselves, except for the fact that shoehorning in so much extra content in addition to the original kid-saving adventure promised by the end of the first film makes the lot of it seem kind of packed-in, jumpy, and rushed. And, again, perhaps the most poignant symptom and symbolic manifestation of this form of screenwriting is the illogical and somewhat misogynistic treatment of Jennifer in Back to the Future II.

Cordelia Siporin is a cinema scholar, film enthusiast, library advocate, puppeteer, cartoonist, and saber fencer. She lives in New Jersey with her fiancé, various animals, and an interminable hoard of rad action figures.

Back to the Future Part IIcontributor