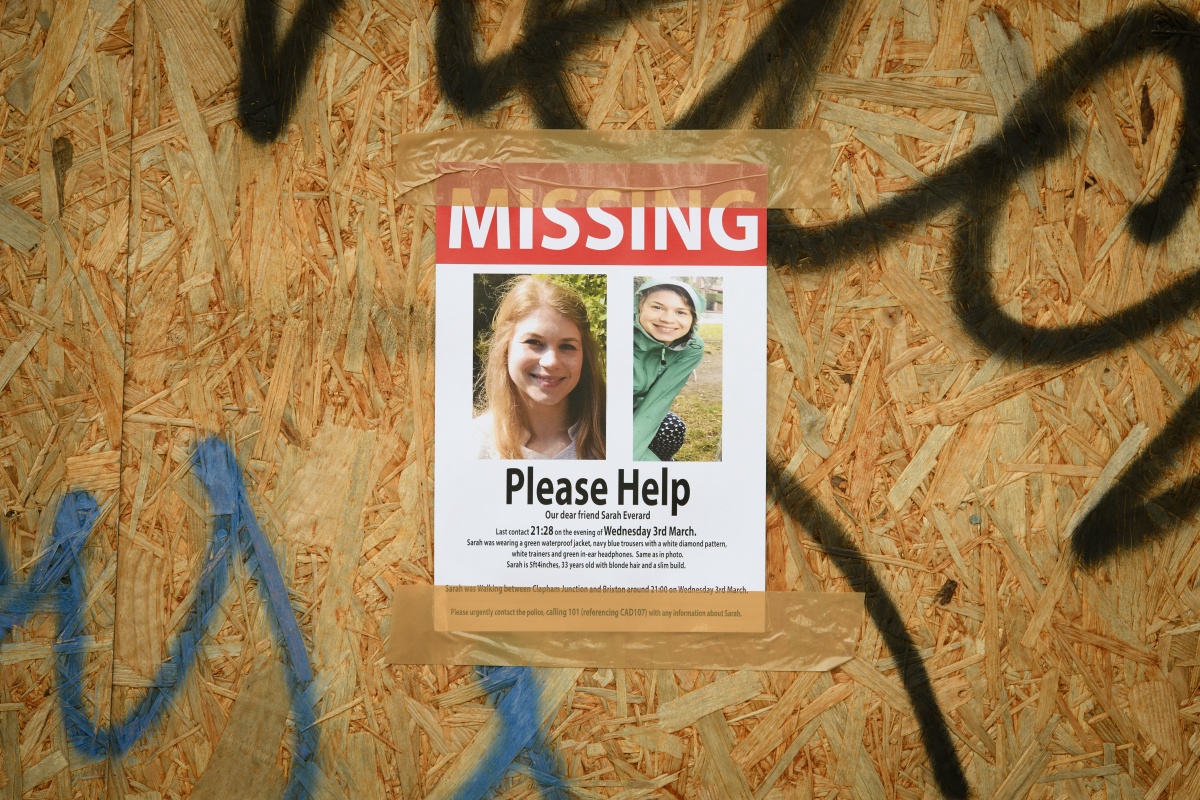 On March 3rd, Sarah Everard, 33, was spotted while walking home to Brixton from a friend’s house in Clapham, England. That was the last time anyone had seen her. Everard’s disappearance has sparked a conversation about the threat women face from men.

According to the BBC, the walk from her friend’s place to her own is roughly a 50-minute walk. Everard was apparently on the phone with her boyfriend during the walk, making plans for the next day, and was last seen in “a bright-green raincoat, white-and-blue patterned pants, green headphones, and a white beanie.”

The police began reaching out to the public via social media on the 5th of March and by the 6th her family spoke out saying “she is always in regular contact with us and with her friends and it is totally out of character for her to disappear like this.”

Yahoo News is reporting that a Metropolitan Police officer has since been arrested on suspicion of her murder. The Guardian went further and said that the officer is 48-year-old Wayne Couzens,”a member of the parliamentary and diplomatic protection command that patrols government premises such as 10 Downing Street.”

“This is a serious and significant development in our search for Sarah and the fact that the man who’s been arrested is a serving Metropolitan police officer is both shocking and deeply disturbing,” Met assistant commissioner Nick Ephgrave said while announcing the arrest at midnight, according to The Guardian. Met commissioner Dame Cressida Dick noted that the arrest sent “shockwaves and anger through the public and through the Met.”

“I speak on behalf of all my colleagues when I say that we are utterly appalled at this dreadful, dreadful news,” she added. “Our job is to patrol the streets and to protect people.”

While investigations are still ongoing, it has also been reported that human remains have been found in Kent. Nothing has yet been confirmed.

The Met police warned women in Clapham not to go out alone, following the disappearance of Everard, but of course that places the blame on women, on those of us who are just trying to get from one place to another, especially when the person who is the main suspect is a cop.

Which, again, should let everyone know that when we say ACAB, there is a reason for that. The very people who are supposed to protect us with our own taxpayer money.

Reading about the Everard incident has been a triggering experience for many who have lived and survived through the threat of violence. I remember someone I love texting me a description of their clothes and location because a man with a gun was following her. I ended up sending an Uber to them in order to make sure she was safe (her phone wasn’t working properly at the time with data), but I remember her calling me and saying that the man had followed her for blocks and then up to the car door itself.

She survived that night, but just thinking about it makes my heart pound.

I can remember countless moments of men going from sweet and flirtatious to violent and cruel at a soft rejection—just because I didn’t want to talk or simply be bothered.

Cis women, trans women (especially Black trans women), and femme presenting non-binary folks all deal with this kind of harassment on a constant basis from cis men who think they are entitled to our bodies, attention, and space.

Sarah Everard was just walking home. That shouldn’t be something that puts you at risk for murder.