And you should be watching it. 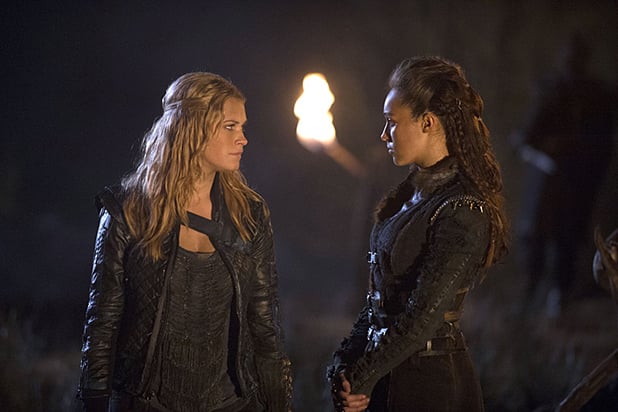 Clarke Griffin (Eliza Taylor) was already a tremendously written and performed female character, bucking the typical archetypes for leading ladies, particularly ones on The CW. She is courageous, clinical and kind-hearted, while also being vulnerable and, at times, lethal. She’s the brain of the show team, the one who’s always trying to keep her people one step ahead of any looming threat. She’s a badass.

She’s also the lead in a primetime, science fiction show who’s been confirmed as a bisexual character. It’s not pandering, or queer-baiting; it’s simply a part of her characterization that’s played as if it’s totally and beautifully normal.

So, in summary, a lead female character is bi and it’s not being played as being a “phase” or anything that she’s going to have an existential crisis about. She kissed Lexa (Alycia Debnam Carey), the leader of the Grounders, because the two had developed a growing attraction to one another and in a moment of solitude and intimacy, shared a kiss. When Clarke pulls away she tells Lexa that she needs time before jumping into another relationship.

Her hesitance isn’t born from self-reflection over what it means that she’s kissing another woman; it’s hesitance grown from grief and from needing time before she can commit herself emotionally to another person. It almost doesn’t need to be said how much of a rarity this is, for a character’s sexuality to be treated as second nature rather than as a pause in their development.

It also comes as no surprise that bisexual characters are notoriously underwritten and aren’t given the spotlight, often due to writers being incapable of writing them with any grace. They write with the mindset that audiences need everything defined; everything labeled and packed perfectly into a box with a brief description of what lies inside. It’s frustrating and still a hurdle that needs a running head start before barreling over, but with The Legend of Korra’s recent ending and now this new development in The 100, it’s nice to know that there are representations out there for bisexual women. Being visual and prominent in pop-culture is integral to young people’s development, and seeing physical depictions of you onscreen is a way to relate through others and feel a sense of normalcy and dependence. I don’t think it’s too hyperbolic to say that Clarke being bi is a definitive step forward: she has to be the first leading character on a popular show that’s openly bi.

For decades it seems that science fiction has been the most progressive genre for female characters and their representation. Star Trek’s Nichelle Nichols allowed young women of color to see themselves onscreen; Harry Potter’s Hermione encouraging a generation of young women to be their bravest and brightest selves;  Battlestar Galactica showcased women who could play the archetypal badass role; Buffy the Vampire Slayer allowed queer girls to see themselves play the hero. Now there’s The 100, continuing the theme of genre shows and science fiction being a beacon for those who consider themselves a little odd or out of place, offering places of escapism while also allowing depictions of ourselves who feel a little weird to live and breathe onscreen.

This is a small victory. Currently on television across all viewing mediums we have a handful of characters who would identify as bisexual, and fewer who are identified as such on such a well seen platform. Piper on Orange is the New Black, Brittany on Glee, Bo Dennis on Lost Girl, Callie Torres on Grey’s Anatomy – all bisexual characters, all represented with varying degrees of tact. For every well-respected bi character on television there’s one that’s treated as a punchline or one positioned for a storyline based solely around their sexuality. What makes Clarke’s sexuality such a wonderful and yet simple win is the writers’ ability to incorporate it into her character and her narrative so seamlessly. It’s not an erasure of her sexuality but it’s written in a manner so that it’s not a big deal, it just is. It’s a natural progression for the character.

So often we watch shows where actors share tremendous amounts of chemistry and wish that their relationship could turn into more. Taylor and Carey shared a tremendous amount of chemistry and each scene leading up to their kiss played out as if there was a greater connection lying beneath their mutual want to protect their people. They kissed, there were obvious sparks, and now we get to see how it will play out. Maybe they’ll never have a relationship; maybe Clarke and Bellamy are the two characters are destined to end up together; maybe Clarke will fall for another female character. What’s cool and exciting about this recent development is that we could justifiably believe in any of the mentioned possibilities. It’s a validation in the visibility it offers. It’s a small step, but a significant one – and one that this fan greatly appreciates.