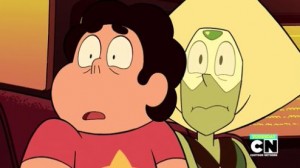 Please let this “Summer of Steven” be longer than five episodes.

The Recap: Steven discovers Malachite’s location while dream-inhabiting the body of a Watermelon Steven, and the main trio form Alexandrite to take her down. While they’re eventually able to separate Jasper and Lapis, the earthquakes caused by the cluster break up the island, causing the unconscious Jasper to slip beneath the waves.

With time running out, Steven and Peridot have to operate the drill and attempt to stop the Cluster on their own. Feeling a strange resonance with the forming shards, Steven is able to connect with them and begins trying to bubble the shards for their own safety. He fails, but the shards are able to bubble one another, allowing them to speak with each other without feeling compelled to form.

WELL, that’s some welcome back! This marks the end of both the show’s biggest loose end from season one (while opening a new one, but hold that thought) paired in a one-two punch with the looming threat behind season two. We’re on untested ground here, dear readers, and I couldn’t be more excited. Oooooooh, it is just SO good to be back.

After tonight’s premiere it looks like we’ll be back to a weekly airing schedule for at least a while, and like “Mirror Gem/Ocean Gem” or “The Return/Jailbreak,” it’s hard to imagine these two episodes working quite as beautifully apart as they do together. “In Too Deep” is almost entirely devoted to the long-awaited battle with Malachite, sacrificing some of the more artful intricacies we’ve seen in past Gem battles in favor of sheer, earthshattering scope. The use of the Watermelon Stevens isn’t just a useful plot device (and a nice Adventure Time-style update on a minor unanswered question—itself fitting, given the very AT-esque In Media Res opening) but a constant reminder to the audience of the scale of what we’re seeing, which could easily be lost with just an endless background of ocean.

Since it has to say a lot while still keeping the focus on the action, this episode cashes in all of its chips in the hope that we the audience are now trained enough in their style of visual storytelling to go with the flow. The plot beat of Steven not only blithely accepting that he now has a magical dream connection with his watermelon creations but then turning around and consciously using that skill not twenty minutes later both shows how far Steven himself has come as a Gem and how quickly the writers now trust us to absorb new concepts.

We’re three seasons in now, after all—the halfway point, if the season 5 renewal winds up being the final one—and the show’s worldbuilding and logic is tightly woven enough that things like an entirely new society, a new Gem ability, the difficulty Alexandrite is having holding herself together, and Malachite’s increasingly fragile sense of self, can all be communicated with uncommented on dialogue quirks or small visual cues with the assurance that they’ll land. It’s an especially strong place for the show to be starting its new season from, implying not just that the stakes will be raised on a narrative level—because there’s no way that we won’t be spending a good chunk of this stretch worrying about Yellow Diamond—but that we’ve graduated to a point where subtle character development can be counted to land and grow over time (I say with foolish optimism, having watched the fandom be dreadful without fail since day one).

Which leaves, before we move on, the other new plot thread. Because it’s not yet time to let go of mysterious things falling into the sea, apparently. Now, longtime readers of this recap series will also know its longstanding rule: I don’t give up on a character’s possible redemption until Steven does. This track record has done pretty well so far, and I honestly suspect that Jasper is too important and valuable a differing perspective not to wind up on the team eventually (as a soldier, as someone who possibly new Rose, and as a wholly unique part of the Homeworld caste system).

But that development might be as much as a whole season off, and who knows how long it’ll be before we see Jasper again at all. My back pocket bet has always been on the likelihood of a wounded or otherwise harmless Jasper encountering not the Gems but a human (Sadie, maybe? She and Lars really aren’t good for each other at this stage in their lives) and winding up with a grudging respect for humanity that way. In fact, I’ll go ahead and put that down for posterity, and hope it’s not half a season until we see the waterlogged Cheeto Puff again (and no, internet, the Gems didn’t let her drown on purpose; it’s pretty clear that they’d have risked sinking themselves if they’d gone after her).

If the first half of our double feature is a tidal wave of payoff, then “Gem Drill” is the eye of the hurricane—quiet, ominous, raging all around and threatening to spin apart at any moment. It’s superb, making the moments of violence almost a relief as an escape from the creeping dread inside the pod. And even within that, we catch a glimpse of how much has changed in the short time that we’ve been gone: not only is Steven more in tune with his abilities, but Peridot has accepted that Earth is her home now. Her speech about Homeworld is a beautiful, understated bit of poignancy; it’s rare to see that complicated nostalgia for a less-than-ideal birthplace portrayed at all, never mind packed into one line (Shelby Rabara continues to impress with the nuance she layers into Peridot’s nasally grumble).

And most importantly, Peridot’s beginning to take on a new moral compass. “It doesn’t matter if it knows what it’s doing. It’s still going to do it,” feels like an extremely portentous line for the conflicts to come. Every conflict so far, from Lapis to Peridot to the Cluster, has been saved by Steven’s belief in others. And multiple times now, it’s been tested almost to the breaking point. Eventually, we’re going to go past the point where intent matters less than the consequences of a character’s actions, when Steven’s kindness and empathy isn’t enough to defuse a situation (I suspect this will come to a head with Yellow Diamond, but it might well be with Jasper). At that time, what does one do? What action do you take, when you believe in another person’s ability to change but can’t stand aside and let them come around on their own? It’s going to be a hard and important lesson for Steven, and one I look forward to seeing his answer to.

Speaking of the Cluster, what a design. This character has been the threat in the dark for a whole season, and it lives up to the hype. In contrast to Malachite, size alone is almost beside the point. The more fitting word is magnitude: the sound design mixes the chilling roar of the Cluster so that it dominates every scene, even inside the drill, so inescapable that you can almost feel it rattling your teeth even when it’s only really in the background. It’s a wall of noise befitting the all-encompassing spectral hands and the endless field of crystal.

With all the anime influence in Steven Universe, there was no way this conflict with the Cluster wasn’t going to end with an out-of-body meeting of the minds, with Steven appealing to the Cluster on behalf of the Earth. But while it might have been expected, that doesn’t make the execution any less breathtaking. The marriage of light and sound in conveying the Cluster’s thoughts (it doesn’t just get louder and brighter when the shards shout, the screen practically takes on a painful glare) as well as Steven’s own distress. And the equal emphasis on small moments, like the little heartbeat inside of those two isolated shards, keeps the conflict grounded. It lets us see things as Steven does, always looking for the well-wishing heart even in an inanimate lump of rock.

When Steven fails, only for the Gem shards to seize this opportunity to protect themselves and the whole Earth, it proves to be one last exploration of scope. In doing this, Steven didn’t just save Earth, or get through to the Cluster, although he also did all those things. He inspired strangers, lost souls, not just to follow his orders but to take his idea and implement it themselves. That’s the act of a leader. I suspect we’ve far from seen the last of how Steven is coming to resemble Rose.

At time of writing details are hush hush about next week’s episode, though I can’t help hoping it’ll be checking in with Jasper after all. Either way, we’ll greet it together. Hope to see you there!

Vrai is a queer author and pop culture blogger; they want to, nay, need to believe we’re getting more than the five episodes announced this summer. You can read more essays and find out about their fiction at Fashionable Tinfoil Accessories, support their work via Patreon or PayPal, or remind them of the existence of Tweets.