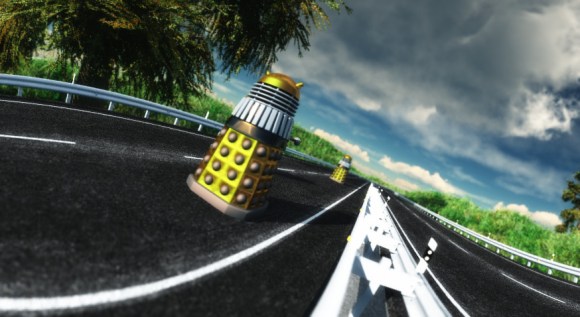 Two things you don’t expect to see on any given day: 1.) Any type of villain doing charity work. 2.) Daleks having a friendly race to see who’s fastest. All that and more is exactly what happened in Yeovil in in south Somerset, England recently. And yes, there’s photographic proof.

Yeo Leisure Park in Yeovil recently celebrated their 10th anniversary, and to celebrate they hosted all sorts of events. From their description before the event: “From noon until 6pm visitors can experience Doctor Who, the Daleks and Alien Invasion, an interactive six-hour celebration of all things Doctor Who, featuring Dalek racing and first-hand interaction with Cybermen, Scarecrow robots and Sontaran characters.” 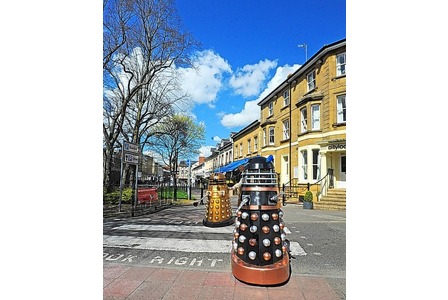 Apparently, although the aliens made an appearance in their full-size forms, the Dalek race was really with smaller, remote controlled Daleks. Still awesome. But there was a real race to be had at the event. Nuffield Health Centre organized a 5K run to raise money for St. Margaret’s Hospice, to which proceeds from the anniversary celebrating were also going. 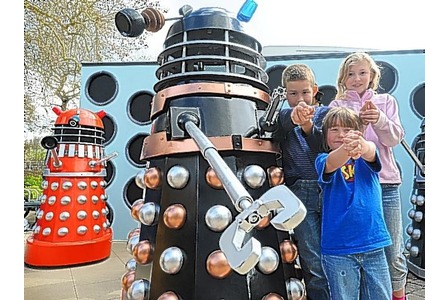 The site also said, “Children and adults will be able to try on monster heads and costumes. There will also be a full-size Tardis with special light, sound and smoke effects.” To which I say, someone organize something like this near me. 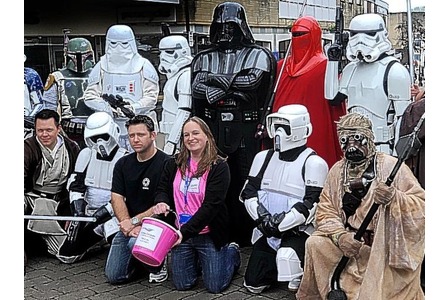 The members of the 501st UK Garrison Star Wars costume group also raised money for a different cause with an event a few days later in town. Here they are with organizer Paul Andrews and Sarah Cherry. “Stormtroopers from Star Wars hit the high street to raise money for Yeovil District Hospital’s Flying Colours Appeal,” writes the paper. “Bemused shoppers were confronted by Darth Vader and a small a small army of troops as they wondered up Middle Street.” They were able to raise about $1500 for the initiative to help support the Women’s Health and Maternity Unit at the hospital.

(via This Is Somerset, top image by Lupus-deus-est on DeviantArt, photos by Laura Jones)