Schrödinger’s Queer: Does Representation Without Confirmation Mean Anything? 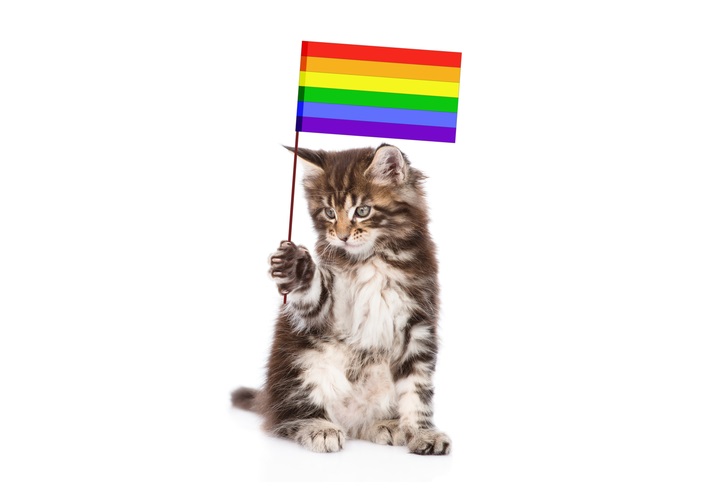 In my informal studies of the reactions to the new Ghostbusters, one of the most popular sentiments I’ve encountered is that every female-identified person left the movie just a bit gayer, thanks to Kate McKinnon’s hilarious and kick-ass performance as Jillian Holtzmann. Some of the Sapphic sentiment regarding the character was the usual “girl crush” hyperbole, but much of it was legitimately related to what many actually perceived as the not-so-straight sexuality of the character. Kate McKinnon is an out lesbian and infused her performance with glorious queerness, but following the release of the movie there were many questions raised as to whether Holtzmann was really gay. All of this led me to the question: if a queer character exists in media without explicit confirmation, does it make a sound?

Fans both queer and non- have a long tradition of speculating about characters’ sexualities. Even back in the Victorian era some wondered about the closeness of Sherlock and Watson’s relationship, and as attitudes towards sexuality evolved over the years, creators even added intentional subtext to their narratives as nods to possible queerness should the audience choose to see it that way. A key example here will always be Xena: Warrior Princess, which managed to tell an epic queer love story without ever explicitly acknowledging its leads’ queerness at all. Or did they? Lucy Lawless famously acknowledged that Gabrielle and Xena were “married.” And the actual characters were canonically soulmates and were married, actually married, on the show, in a different reincarnation where the sexes of their bodies were different…for a while (Xena was a weird show, folks). So were they gay or not?

You’d think that, twenty years later, we would have a much easier time of knowing whether characters actually bat for our team, but things haven’t changed much since the Xena days. We’ve seen ambiguously gay series enders for shows as distinctly different as The Legend of Korra and Hannibal, only for the implied gay to be later confirmed by the creators. But if it’s ambiguous in the story itself, does it count? The same problem vexes Ghostbusters now. Those in the know can see that Holtzmann is queer just from her first wink to Abby, but it’s never said in the text of the movie. Instead we have director Paul Feig offering a silent nod when asked, and confiding that “I hate to be coy about it, but when you’re dealing with the studios and that kind of thing…” The implication here is that of course Holtzmann is gay, but the studio, for whatever reason (fear of censorship in China, election year jitters, or pure cowardice) didn’t want them to go there. Again we have what fans call “word of God,” however vague, acknowledging and affirming what many viewers already see. But is that what we really need?

Well, for casual audiences? No. Not everybody is going to read interviews about the show and learn the creator’s intent. And even when queerness is made pretty dang explicit, as was the case with the very lesbian Yara Greyjoy literally saying she’d be up for marrying Daenerys on Game of Thrones, people still didn’t get that it was flirting and articles were written wondering if that moment might have been a bit gay (spoiler: it was). The reason for this is a thing called heteronormativity–the assumption that all people are straight until proven otherwise. And the proof that’s required rises to a much higher standard than nearly any other aspect of a character or story arc. It all comes down to text versus subtext, which both are important parts of a story. Yet when that subtext, or even text, implies queerness, it’s often immediately invalidated, ignored or just not seen at all.

Here’s an example. One character is depicted as The Healthy One. They scoff at others eating fried food. They’re shown eating salads and organic produce and are mocked for it. They never explicitly come out and say “I really love salad” but we as the audience know that because we’ve inferred it based on their actions. But when their brother flirts with men and women, shows love and attraction to a man, or repeatedly says how much that man means to him…he’s still straight. Because all men are straight and bisexuals don’t exist and…you see where I’m going. Another contributing factor to this perception problem is that queerness, especially in men, is often played for laughs or shock. But even if a male character getting flustered by attention from another man in a clearly romantic way is framed as a joke for the audience, it’s still a Thing That Happened On Screen and still a valid and important aspect of the character. Just cause some people think gayness is funny doesn’t make it not true for that character. I’m reminded of a phrase from a legal history course regarding proving adultery in Islamic law–that for someone to be punished for a crime, one must see “the rope go into the well.” For many, when it comes to queerness, the audience goes blind and nothing short of a Pride parade on screen will affirm what the subtext of a story is already saying.

Another problem for finding canonically queer characters that aren’t explicitly stated is an idea in literary theory called “death of the author,” which it comes up a lot in fandom where transformative works like fanfic reign supreme. Whether or not a character was intended as queer is immaterial to whether we the audience chose to see them that way. Their queerness is dependent entirely on our perceptions, which are all potentially valid and false simultaneously. It’s a quantum problem. Not to get too far above my pay grade, but the famous paradox of Schrödinger’s Cat is the same. In quantum physics the same particle can rotate many different directions, depending on what direction of rotation is being measured. Therefore if a cat is placed in a box and poison is released or not released based on the rotation of a subatomic particle one way or the other, the cat can be said to be both alive and dead at the same time. The point here is not that physicists hate cats (or that the cat is obviously a zombie and will begin the inevitable empire of the feline undead), but that two realities might exist simultaneously and both be valid if the cat can’t be observed.

So, those of us searching for representation–we’re in a tough spot. We have subtext, we have “word of god,” and we have the reassurance that we can make these characters whatever we want them to be outside of canon and that’s fine, but we still have so few explicitly queer characters and that…still kind of sucks. Without explicit representation we end up with queerbaiting and fans feeling betrayed and used. Representation matters across the board, be it for women, people of color, marginalized gender and sexual identities, and all places those identities intersect. It’s important for us as queer people to see ourselves on screen. And it’s actually pretty easy to do. When it was announced that original Star Trek character Hikaru Sulu would be confirmed as gay in Star Trek: Beyond I was beside myself with joy. His sexuality is handled as incidental to the plot, yet it also honors the legacy of inclusivity and acceptance that has always been a core value of the Trek universe and the work and advocacy of out original portrayer, George Takei. Sulu just happens to be gay, but it’s shown in a way most people can’t question (though I’m sure they will) and the world didn’t end because of it.

We’re making other steps too. The lead producer on the new Xena, Javier Grillo-Marxuach, has stated that the new Xena will be canonically bisexual, and we are seeing more and better queer characters in other media as well. But in the meantime, there’s more work to be done and some of it simply comes down to how we look at media and listen to other fans. Though all opinions and headcanons can be valid (see above where the author is a half-dead cat), maybe give other, queerer interpretations a chance. When someone says a character is or could be queer, don’t dismiss it, consider it. Hell, you already went gay for Holtzmann. It’s not so bad.