Review: The Art of Video Games 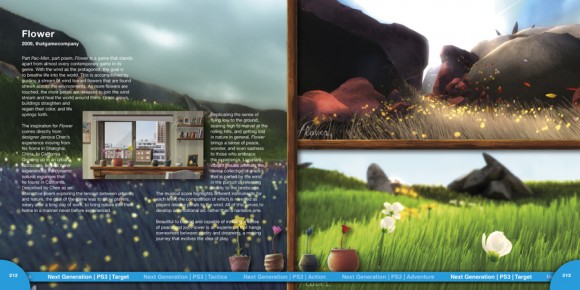 Last year, I learned about The Art of Video Games, a six-month exhibition at the Smithsonian American Art Museum (opening today!). This made me sad, because I do not live on the East Coast and transporters haven’t been invented yet. The exhibition sets out “to explore the forty-year evolution of video games as an artistic medium, with a focus on striking visual effects and the creative use of new technologies” — in other words, everything I love in one neat little package. Sigh.

However, for those of us who can’t attend the exhibition in person, the next best thing is the companion book, The Art of Video Games: From Pac-Man to Mass Effect, written by curator Chris Melissinos, with images by Patrick O’Rourke. I was expecting a heroes gallery of the best and finest of the gaming world, but this book was oh-so-much more than that. The reader is taken through not just the chronology of digital design, but the gradual synthesis of visual art, music and narrative that has made games into forms of expression far greater than the sum of their parts. At 216 pages, half of which are illustrations with text overlays, this is an easily-consumable read. But that doesn’t mean that it’s light on content. The Art of Video Games is a thought-provoking combo punch of colorful imagery, insightful interviews, and artistic exploration.

The book begins in the pioneering days of the late seventies and early eighties, with the likes of Combat and Space Invaders. Those games were before my time, so I’ll admit, I have always thought of the affinity for that most basic form of pixel art as something based in fond nostalgia. As I read, I gained a whole new appreciation for the creativity that went into those simple games. Taking into account the severe limits of technology at the time, I was suddenly struck by how the designers had found ways to make those boring little blocks into something that could evoke feelings of excitement, or adventure, or fear. I mean, if someone tells you to draw a picture of the ocean, and all they hand you is one broken blue crayon, doesn’t that inevitably force you to think outside the box?

If there was any doubt that those clunky pixels could fully capture the imagination of the player, consider the comment made by my girlfriend, who walked into the room as I was reading the section on Star Trek: Strategic Operations Simulator (1984). “Is that a Bird of Prey?” she asked, nodding towards the page. The image in question was nothing more than a few tiny purple lines, arranged in the most abstract representation of wings and a bridge module. And therein lies the power of games, the ability to make the human mind instantly connect to the idea of powerful warships flying through space, using nothing more than purple squares.

As I read on, I enjoyed learning of the humble beginnings of gaming elements that we now take for granted. Pitfall, for example, was the first game to feature a moving humanoid figure. Pac-Man (which I recall playing in my dentist’s waiting room) was the first to introduce the cut-scene. Mario was given his trademark red cap because they couldn’t animate hair. The details of the creative stretches needed to work around technological limitations are sure to delight not just the hardcore gamer, but anyone who is interested in artistic evolution. Every hurdle towards achieving realism is noted, from simulating 3D environments within a 2D screen, to figuring out how to create the illusion of speed, or motion, or shadow. These are discussions that can be found in any art history class, and there’s something exhilarating in knowing that all of these challenges have been undertaken once again in recent decades, only through pixels rather than stone or paint.

Technology itself takes a backseat in this book, but it plays an important supporting role. In general, the growth of technology is presented as a sort of chicken-and-egg scenario: did the technology drive the art, or did the art drive the technology? No clear answer is given, but I liked that the constraints of technology were so well highlighted. One of the most interesting entries is that of TRON: Maze-A-Tron, whose lackluster presentation is tactfully described as “typical of other overly ambitious games of the era.” The game is held up as an example of the entire genre trying to grow faster than the tech could accomodate. The fact that the book sheds light on not just gaming’s triumphs, but its failures as well, makes for a compelling look at the development of the medium as a whole.

As the games presented grow more complex, so does the breadth of the book’s analysis. Storytelling and narrative are discussed at length, as is the ability for a player to project him or herself onto a character (I was pleased to see that gender and race customization are noted as key elements in strengthening player immersion). Music is discussed as well, and though I’ve got more than a few video game soundtracks at my beck and call, I had never before contemplated just how difficult it is to compose a score for a game that takes the player off the rails. Think about it: if you have separate musical themes for surrounding environments, a theme for approaching enemies, and a theme for key story elements, and you’re going to let the player choose the direction that they’re traveling in, the triggers for those themes not only have to be carefully mapped out, but they have to blend together. I don’t think I’ll ever listen to game music in quite the same way again.

Sprinkled throughout the book are interviews with fifteen of the gaming world’s movers and shakers (and huzzah, there are some ladies in there!). I loved the tiny morsels of trivia tucked in here and there (Ron Gilbert, for example, drew inspiration for the look of The Secret of Monkey Island from the bayou in the Pirates of the Caribbean ride; Shigeru Miyamoto — not interviewed, but mentioned — transformed a dog that scared him as a child into the ubiquitous Chain Chomp of the Super Mario universe). But more importantly, these interviews all contain a palpable sense of playfulness and wonder, something that is instantly recognizable to anyone who has ever fallen in love with a game.

This book belongs on the shelf of every highbrow gaming geek, but it’s also an important read for anyone interested in media studies or human expression. I want to hand this book to every naysayer who sees games as nothing more than cheap, violent, meaningless entertainment. With its engaging pictures, rich interviews, and neatly bundled history lessons, The Art of Video Games makes a solid case not just for the validity of games as an art form, but for its rightful place as one of the defining storytelling mediums of our time.

From The Art of Video Games: From Pac-Man to Mass Effect, By Chris Melissinos and Patrick O’Rourke. Compilation © 2012 Welcome Enterprises, Inc., www.welcomebooks.com/artofvideogames

Becky Chambers is a freelance writer and a full-time geek. She blogs over at Other Scribbles, and she is currently running a Kickstarter campaign to help get her first sci-fi novel off the ground.