Reconsidering the Feminism of Joss Whedon 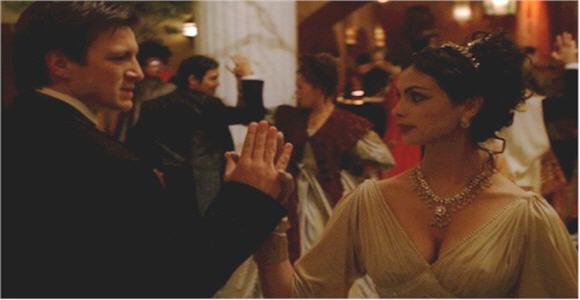 There’s a lot to like in Joss Whedon’s western-meets-space hybrid experiment. Zoe Washburne is possibly the strongest character that Whedon ever created. The fact, too, that she is a woman of color, does not go unnoticed or unappreciated by me, especially after the Magical Negro nonsense inherent in the Primitive Slayer storyline on Buffy. Zoe has the best relationship on the show as well, a push-and-pull with pilot “Wash” that is characterized by playfulness and a firm establishment of what Zoe will and won’t do as a wife (Won’t: cook Wash dinner. Will: stay in sexy bed all day during leave). Which is why the episode “War Stories” is such a travesty. Placing Zoe firmly back in the category of “woman” rather than “warrior,” “War Stories” forces Zoe to choose between her captain and her husband. Captain Mal and Wash have a thoroughly embarrassing fight over which of them Zoe will listen to most, making a mockery of the intense trust she places in both of them. Though the fight is portrayed as childish, it nevertheless elucidates a thread that shoots through the show at several points that wonders quietly and insidiously how Zoe can be a soldier before she can be a woman. The conclusion to this thread comes in the film Serenity, where Wash (spoiler alert!) is killed and Zoe permits herself not the slightest time to mourn, going into full battle mode – nor do we get any reaction, verbal or non-verbal, from her for the rest of the film. This places her decision to rescue Wash instead of Mal from torture in “War Stories” firmly in the strategy department of choices, creating a much harder and walled-off character than we’ve been prone to envision Zoe prior to this event – which also falls in line more easily in Whedon’s usual depiction of women of color: oblique, tough, and voiceless in the face of deep change.

I’ve mentioned why I think Kaylee is a bit of froth – she’s a tad try-too-hardy, existing to fulfill a male fantasy of a woman wonderfully rapacious and pursuant of men, who can also fix the car in a pinch. Nevertheless, neither she nor Zoe are the biggest problems I have with Firefly.

Can you guess? Why, it’s Inara. In Whedon’s future reality, prostitution is the a woman’s highest form of good. There’s no shortage of mentions in Firefly’s 14 episodes of how noble and prestigious Inara’s profession is. It’s a card the scavengers often play to get out of scrapes, in fact. In Serenity, the companions’ home is a glowing and sanctified temple. So, then: the most celebrated job a woman can have in the ‘verse is one that caters (almost) exclusively to pleasing a man in the most sumptuous and zealous way possible. I say almost, of course, in acknowledgement of Inara’s female client – a storyline that is presented wholly for male consumption. Take Jayne’s reaction – “I’ll be in my bunk” – and you get the winking point of Inara’s Sapphic diversion.

No matter how it’s dressed up in expensive clothes, no matter the nod to companions choosing their customers, what the positioning of this profession as noble suggests is that women’s highest role in the new order – and any new order –  is that of concubine.

It’s also worth it to note that the entity determining this apparent dignity is the Alliance, the new government. In the show, the Alliance is portrayed mostly as a bumbling authority; in the film, as an evil and pointed menace. Either way, the Alliance’s control and regulation of women is problematic. If we don’t sympathize with the Alliance, then we don’t sympathize with their regulation of prostitution – but the show makes it clear in its depiction of Inara and the other companions that they are to be regarded highly. In fact, the only time Inara’s profession is degraded is when a man – Mal – wants a more lasting claim put to her, his own, and asserts his arbitrary requirements and ownership over her. Think about it: every time Mal has a problem with Inara, he brings up their monetary arrangement for her leased shuttle – that’s Mal reasserting his dominance over her. Which is presented as romance.