Quantum Entanglement: A New Way to Be Married 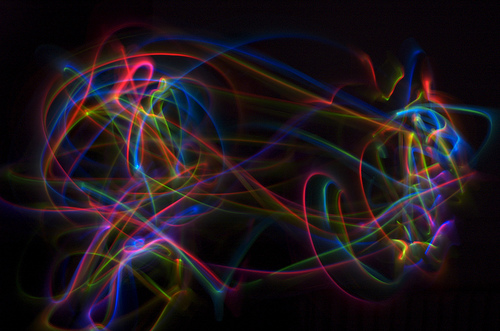 In New York City, at the AC Institute, people will be able to get “married” on a whole new level. An elemental level. A quantum level. Artist and experimental philosopher Jonathon Keats, who previously created a photosynthetic restaurant for plants, has come up with a way to truly connect two partners without the interference of the law. The concept of quantum entanglement says that two particles will always be connected, and if one particle is affected, the other one is also effected, no matter how far away.

In other words, when two or more particles are entangled, they behave as if they were one and the same, and any change to one instantaneously and identically changes those entangled with it even if they’re a universe apart. “Just try doing that in a marriage contract,” Mr. Keats says.

Two quantum systems, in this case, two humans, that have been interacting with each other — and become entangled — form a quantum superposition, in which two states cannot be considered independently of each other. (“You jump, I jump, right?”) That connection is felt over any distance and can communicate instantaneously. Those two systems can also provide an exact measurement of the other, just as an opposite — yin and yang, two sides of the same coin, etc. What Keats is offering at the AC Institute is the chance for two partners to have entangled photons translated into a human union:

The equipment is situated in a sunny window. Exposed to the full spectrum of solar radiation, a nonlinear crystal entangles photons. Pairs of entangled photons are divided by prisms, and the photoelectric effect translates their entangled state to the bodies of a couple who wish to be united.

And it’s painless! There is also no paperwork, no appointments, and no cost. And no licenses necessary, so this is for everyone. Now, if that isn’t romantic, I don’t know what is.

According to the press release, “Entanglements will be available from May 12 to June 18 2011 in the South Alcove of the AC Institute.”