Good News? The Powers TV Show Is Starting Over 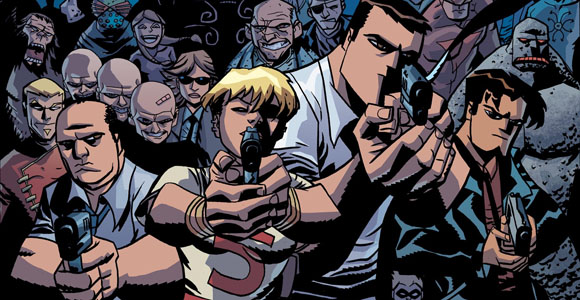 When last we heard about the FX television adaptation of Powers, the Brian Michael Bendis and Michael Avon Oeming crime-drama/superhero comic, it was shutting down and retooling. Turns out, most of the talent may not be going along for the ride. They’re starting completely from scratch. Is this good news or bad news?

Powers is the creator owned comic, published by Image, that centers on homicide detectives Christian Walker (Jason Patric) and Deena Pilgrim (Lucy Punch). One recently lost powers, the other gained them, but are both tasked with solving cases involving others with powers.

According to Comic Book Resources, “After the initial pilot was filmed, FX President John Landgraf candidly called it ‘as difficult an adaptation as I’ve ever worked on,’ and the series was not picked up. However, it wasn’t passed on either. Even as actress Lucy Punch moved on to other projects, Bendis was publicly stating how things were moving forward with more scripts being written as FX decided what to do about a potential reshoot.”

Even though reshoots were going to happen, most of us assumed the cast (which also included Carly Foulkes, and Charles S. Dutton) would remain. Apparently that may not be the case. In an interview CBR conducted with Khary Payton (also cast), the actor revealed he’s out.

“The higher ups want to do this so badly because they know it’s going to be the coolest thing on television. But it’s hard. It’s a hard concept, I think, to get. And they had to step back and start over again,” Payton said. “Unfortunately, we – all of the actors – got released. They’re literally starting over. They want to do it again. And fortunately and unfortunately, I’m doing another show, and I still hope beyond hope that I can be a part of Powers.”

CBR asked for a comment from an FX representative who said, “I won’t comment on any of the actors contracts, but I’ll tell you this project is not dead, and it is still to be determined if we’ll move forward with reshoots on the pilot. There is currently no timetable on when to move forward.”

Whether the talent is involved or not, I see this as a good sign. At least the network believes in the show enough to try again. Unlike NBC and Wonder Woman.