JK Rowling's Patronus Is a Pine Marten | The Mary Sue

JK Rowling’s Knows What Her Patronus Would Be, And It’s Adorable

This puts my "cat unicorn" to shame, not gonna lie.

With all this recent talk of patronuses (patroni? patronees?) lately, it only stands to reason that someone would think to ask the Harry Potter creator about what her own happy thoughts would eventually conjure. So, now that we know… what the heck is a pine marten? Is it like a Housemartin*? And more importantly, will I want to cuddle it? The answer to that last question is a resounding yes.

To begin, here is a picture of a pine marten in Gairloch, Scotlandaaaah noooo LOOK AT IT 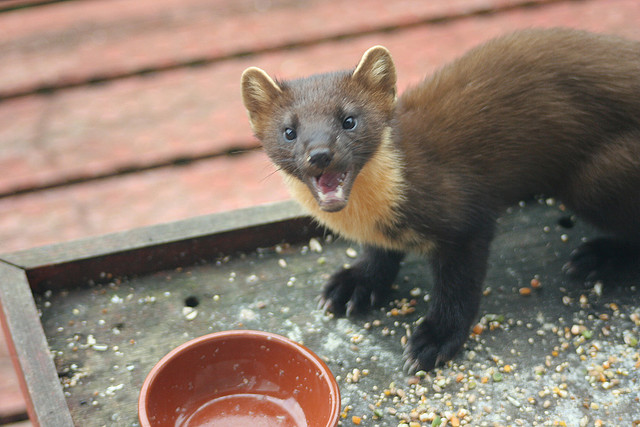 This cute lil’ guy is a member of the mustelid family, which includes minks, weasels, badgers, wolverines, otters (which is Hermione Granger’s patronus, by the way), and ferrets (as in amazing bouncing ones). It lives mostly in well-wooded areas of Northern Europe—although there are similar marten species in North America, most of which are endangered or almost extinct—and are about the size of your average house cat.

Also, sometimes they bounce around and it’s the cutest thing ever.

Unfortunately humans have historically been a big threat to the pine marten population, as they were once prized by trappers for their fur and their habitats are often disrupted by deforestation. Now they’re pretty rare in Ireland and Scotland, and almost unheard of in England.

But remember this, Potterheads: pine martens are wild animals, and carnivorous ones at that, with sharp teeth and retractable claws. They’re also a protected species in the UK under the Wildlife and Countryside Act 1981 and the Environmental Protection Act 1990. So no, you can’t own one, and you certainly should not try to hug any that you come across because they will probably bite you. But maybe you could transfigure one of your rivals into one if you try hard enough, and that’s just as good, right?