Penultimate Episode of Titans Season 3 Is … Weird, Even for Titans 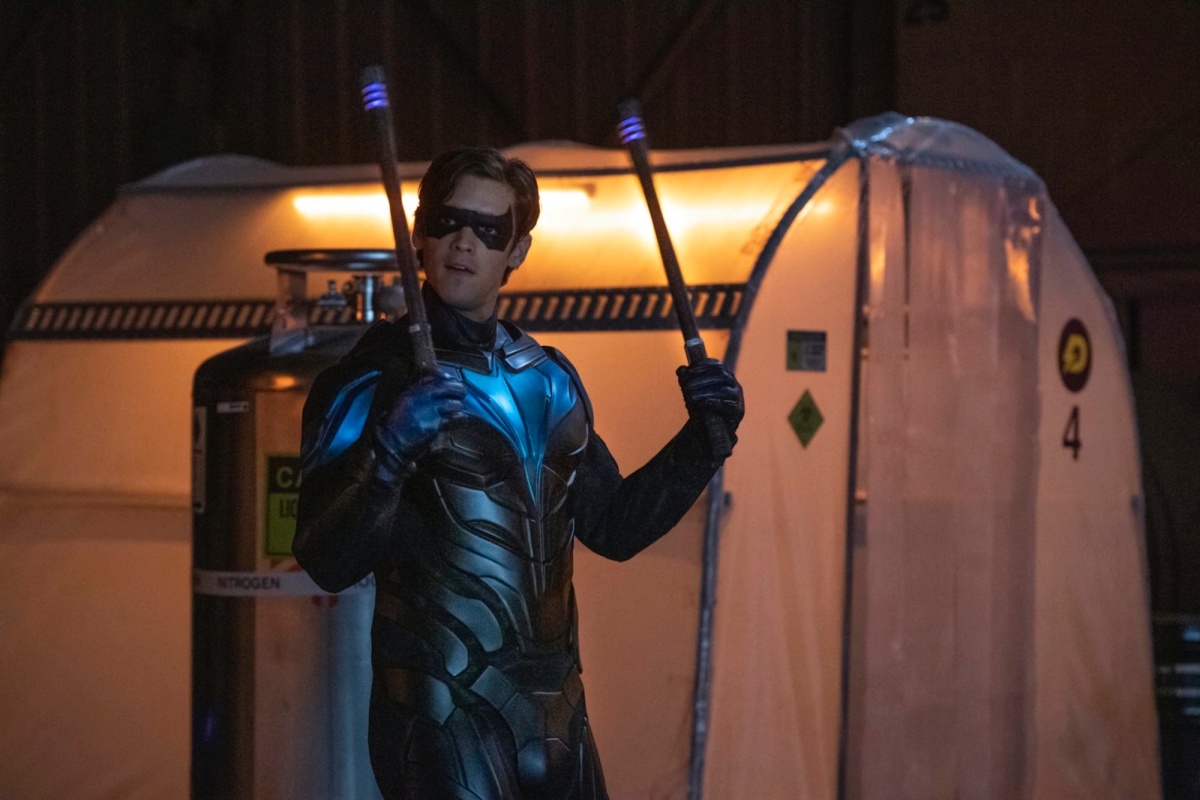 When it comes to this season of HBO Max’s Titans, it started off really strong, but in trying to bring all the different threads together, it has been a stumble towards the finish line.

This episode opens with Rachel and Gar finding the dead body of Dick Grayson, who was beaten to death by a mob last episode. Then … bats come and carry Dick’s dead body into a Lazarus Pit. It is a surreal scene, like something out of Batman Returns, but yes, bats help bring Dick back to life.

But this is the least strange thing to happen.

Inside the pit, Dick has visions of his father and has to struggle against a monologue from Dr. Crane, who torments our lovely Robin. One vision is of Nightwing, as the Joker, beating Jason to death. Slowly, he is brought back and ends up getting some emotional closure with his father. One of his visions is of a young Black girl with a balloon calling him “daddy.”

Speculation time. People are guessing that because this is a young Black girl, and Anna Diop is playing Starfire, she is Mar’i Grayson, the daughter of Starfire and Dick who exists on some alternate Earths.

The young girl is cute, and even though Starfire/Dick hasn’t been on the table for awhile … I am game for the reunion.

Anyway, this makes Dick come back to life, and he ends up teaming up with Jason in order to stop Crane’s ultimate plan: kill the entire population of Gotham. They are slightly too late to stop him from obtaining the chemical weapons—naturally, so next week the A-plot will be a race to keep the city from blowing up.

The C-ish-plot is a newly-reborn Donna Troy teaming up with also newly-reborn Tim Drake, working to get his family out of Gotham. Tim doesn’t want to go because he thinks it is his “destiny” to help save Gotham and become the new Robin. Well, we know he is right, but it is a lot of talking and a lot less showing, because this storyline has barely gotten any time to breathe.

During their attempt to escape the city, they end up in the setup for a gunfight between the Scarecrow run GCPD. Good thing they have an Amazon. Barbara has escaped her holding cell and is working to reactivate Oracle, which will hopefully allow her to fully take on that mantle herself.

Now for the B-plot that I’m actually invested it: the Blackfire/Conner/Starfire stuff.

Last week, it was revealed that it was Starfire who was born without power and that her younger sister, Blackfire, was truly empowered and meant to be the Queen of Tamaran. However, their parents lied and stole Blackfire’s fire to keep her sister entitled.

With her power, Blackfire goes for some revenge with Conner, who is acting salty because Dick used Kryptonite dust to stop him last week. They return to the government facility with Conner, where she discovers her ship is being held. When Kory informs her of their parents’ actions, Blackfire decides to fly back to Tamaran, to fully be whole and become queen. She asks Conner for help in building the orb that will power her ship, but Conner overloads it and destroys it.

Now, since the Conner/Blackfire relationship began, there have been so many people online who were just waiting for Blackfire to turn evil and break Conner’s heart—for her to be lying and manipulating him with her evil Tamaran swagger. But lo and behold, the Lex Luthor jumped out of Superboy.

Like always, Titans is boggled down by not having enough episodes. I rarely say this, but this season needed 22 episodes. There is a lot of stuff going on here, and it is all rushed because, rather than just set up Tim for next season, we are doing it now. We could have just brought Donna back at the end of the season, rather than have it all connect here. If you are gonna do a Red Hood/Scarecrow team up, you don’t need to do all these other things.

But it is just another way the show suffers when it chooses to be Gotham Knights and not Titans.