Why You Should Craft: Girl’s Needlecraft Fetches Over $1 Million at Auction 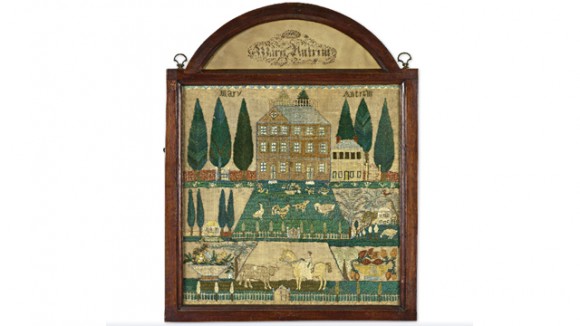 Back in 1807, when a young New Jersey resident named Mary Antrim embroidered the farm scene pictured above, the thought of something like this — a children’s needlepoint sampler — being sold at a fancy auction for just over a million dollars would have been preposterous. In fact, I would venture a guess that people actually, genuinely used the word preposterous in everyday conversation back in 1807. But that is exactly what happened — someone bid on and won this 19th century farm house scene, shelling out $1.07 million to own a piece of folk art/thing a kid made to pass the time 200 years ago.

Sotheby’s, the very prestigious auction house, listed the needlepoint sampler as a “rare and important” item belonging to a collector named Betty Ring. The sampler includes images of grazing livestock, white picket fences, and various buildings — and Antrim probably had no idea it would be considered “important” (unless she was really serious about her crafting). It was originally expected to fetch no more than $120,000, but due to its historical significance, it became a very expensive antique.

David Schorsch, the dealer who bought the item for an unidentified client, said the piece “stood out in a unique way as a folk art statement.”

If there is a lesson to be learned in this, it’s that if you love crafting, it is possible that it will serve you extremely well — in about 200 years. Keep at it, Etsy!

(The New York Times via Jezebel)