After Over 250 Manga Chapters, We Now Know Who My Hero Academia’s Traitor Is! 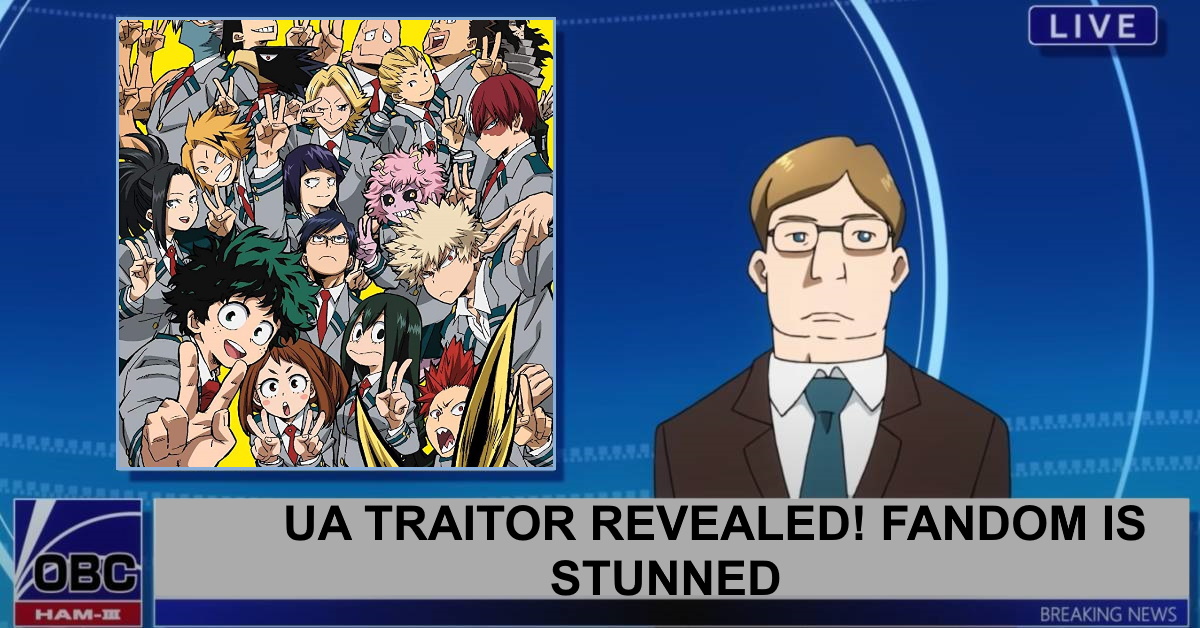 Chapter 83 of My Hero Academia (which is volume 10 of the manga) is the first time we hear about there being a traitor somewhere in UA. Now, over 250 chapters later, we finally know who it is.

**Spoilers for the My Hero Academia manga so far.**

For real this time, as last week we were led to believe that it was Hagakure. It would make sense if it were her, if not a bit obvious since she’s literally an invisible girl.

But no, it’s not Hagakure, no.

SERIOUSLY THE SPOILER IS HAPPENING! 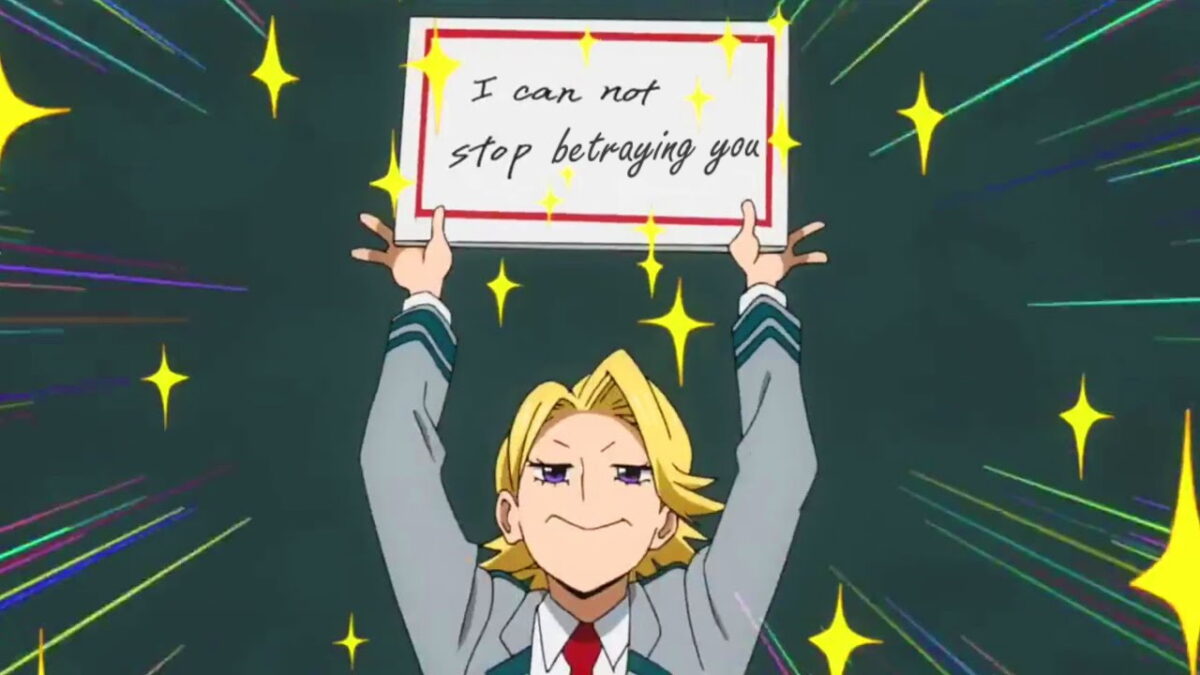 No, I’m not kidding.

I mean, maybe Himiko’s posing as Aoyama? That is a possibility (though I hope that’s not the case and it is Aoyama for real). I dunno; something about the way he looks when he’s crying looks similar to the way Toga looks when her skin is melting from when she transforms to look like another person. 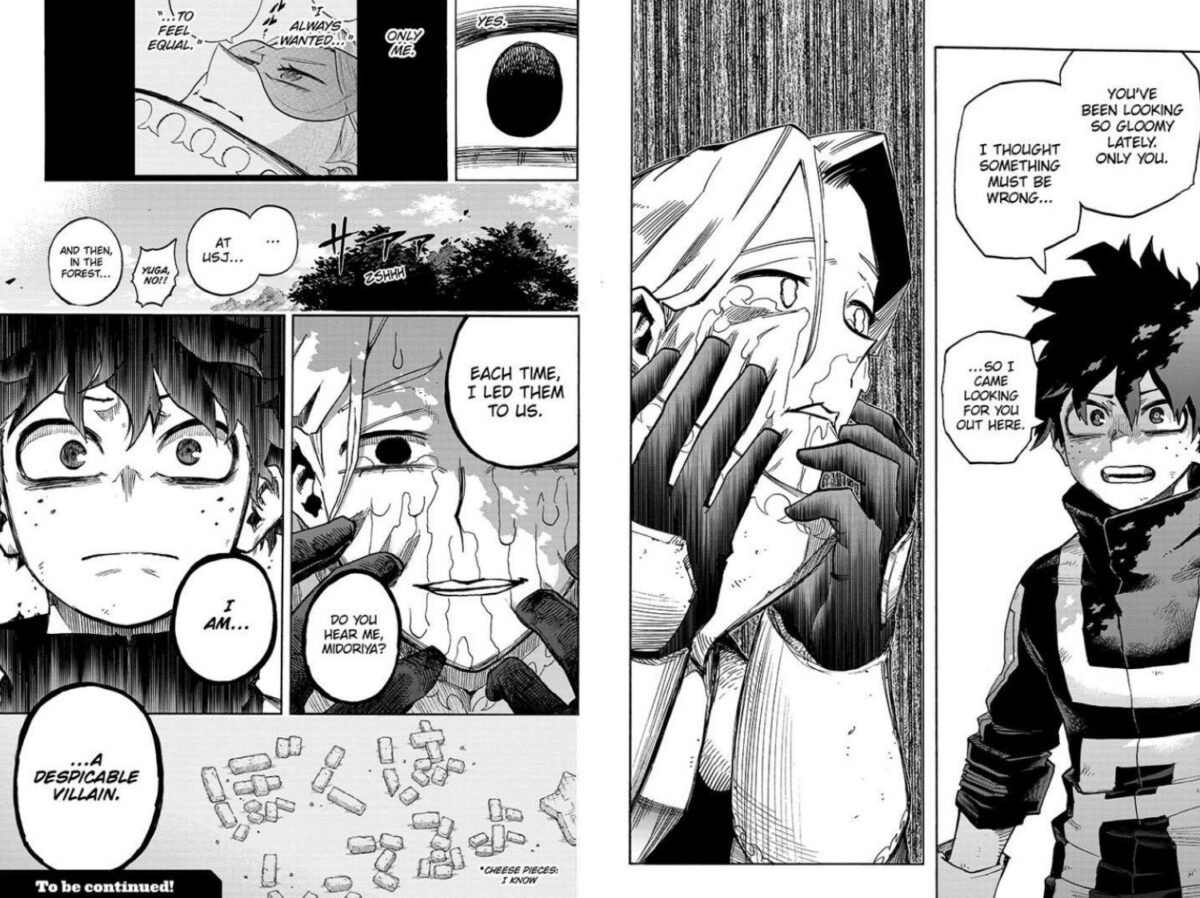 We won’t know if that’s the case until the next chapter, so for now, we’re operating under the assumption that it’s Aoyama.

And now that I think back on the manga, it … makes a lot of sense?!

I cannot fucking believe the cheese was a cry for help

Seriously though, is THAT why Aoyama kept looking directly at the camera throughout the series? Because he was spying?!

Or maybe he really was asking for help and has been this whole time, if his breakdown during this chapter’s reveal is any indication.

At the end of chapter 335, All For One mentions having friends in different places. Since it ended with an image of Hagakure, it sounded like he was talking about her, but we find out in chapter 336 that the previous chapter ended the way it did because Hagakure was spying on the actual traitor: Aoyama.

We see Aoyama talking with his parents and we find out that he was, once upon a time, quirkless. His parents wanted him to fit in because, as we’ve seen with Deku in those early chapters, the world is pretty cruel to those who are quirkless.

However, his parents had no idea that Mr. Potato Head (All For One) was such a terrible person. Not to judge a book by its cover, but nothing about All For One says “trustworthy” to me. 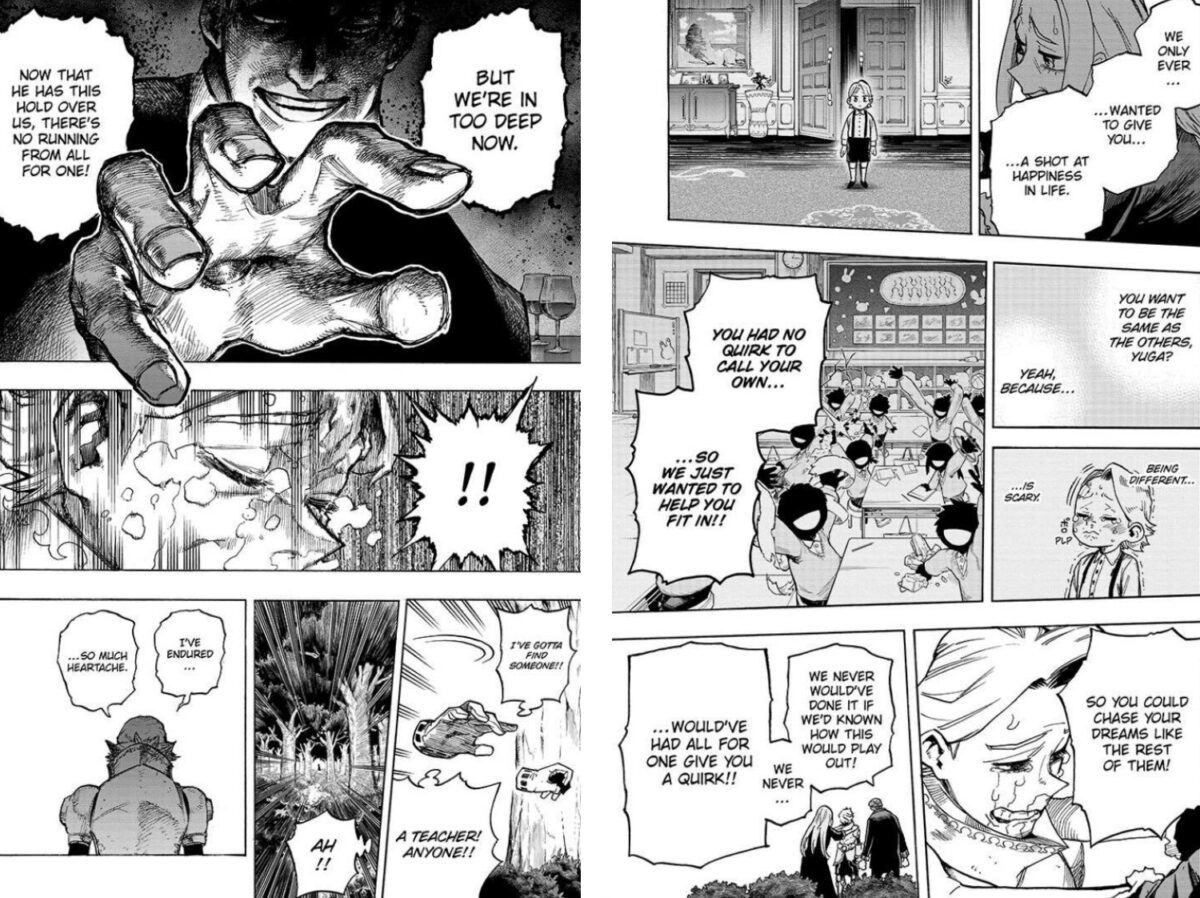 The damage has been done, though, and Aoyama has to act as a spy for All For One and has been doing it since he got to UA. He’s very reluctant about it, though, and even had a moment of thinking he was done back when All Might defeated All For One.

Let’s go back to Bakugo’s kidnapping

Back when the League of Villains attacked the kids while they were training, Aoyama had a run-in with Dabi.

He hid behind the bushes, as to be expected when you’re a kid and Dabi can incinerate your entire body with a single touch. While it looks like Aoyama’s been heard by Dabi, Dabi leaves him be, letting Aoyama live to fight (or flee) another day. 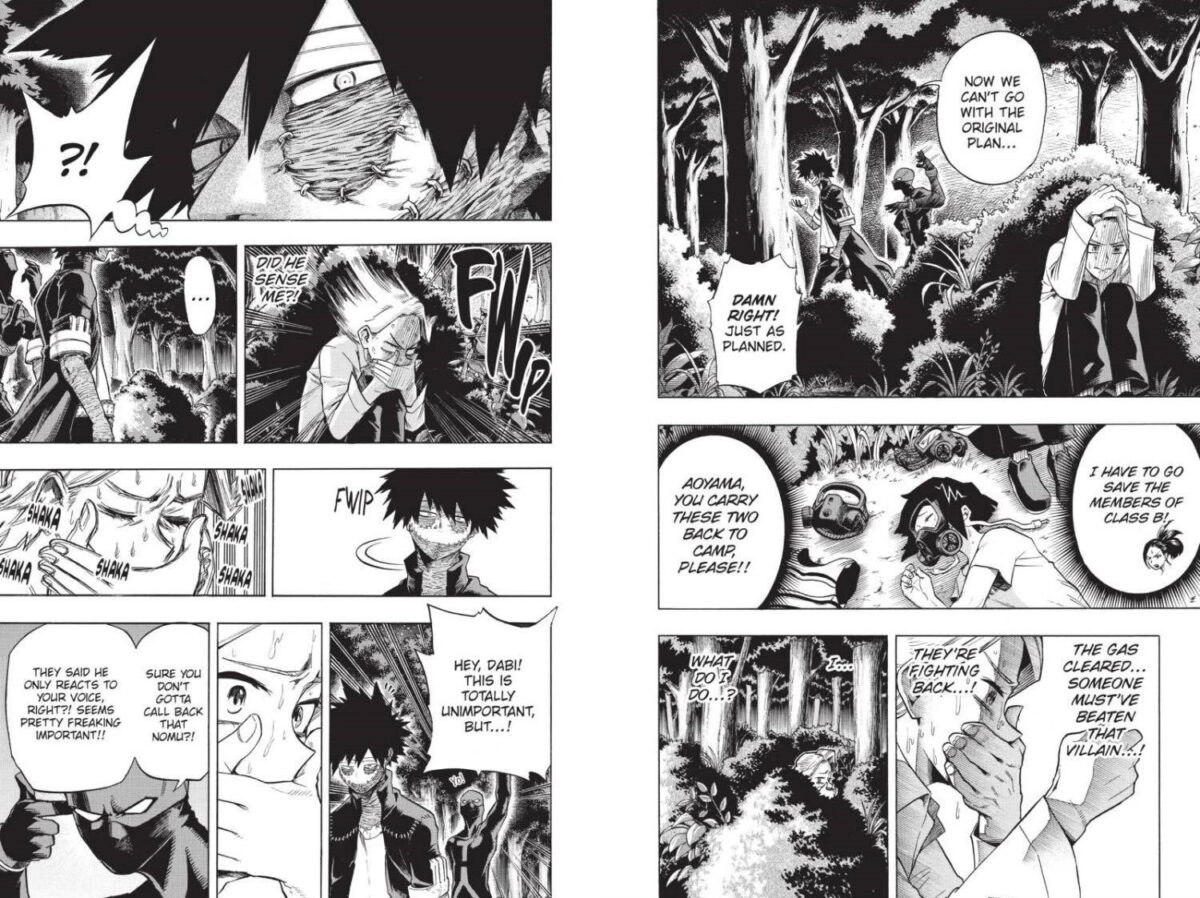 Looking back at that moment and knowing that Aoyama’s the traitor adds new context to the scene. Because Dabi definitely heard him, but he chose to walk away from him. Since we now know that Aoyama was already working for All For One, Dabi wouldn’t have any reason to attack him.

Aoyama asking what he should do at that moment initially sounds like a question about fighting the villains, but now it kinda sounds like he’s wondering what to do in regards to his role as a spy for All For One.

What’s interesting is that Aoyama is one of the characters in the group who doesn’t eagerly jump into battle, guns blazing. He hesitates because they’re going up against villains who would kill them without a second thought. No one bats an eye about it because these kids are up against some difficult odds, but now that we know he’s the traitor, all those moments have taken on a different meaning.

Assuming that my Toga theory doesn’t stick (again, I don’t want it to—I want it to be Aoyama) this revelation is the kind that makes you wanna go back and reread chapters. Aoyama has always been a silly joke character who’s there to chew the scenery, but now that we know he’s the traitor, his habit of waltzing into conversations to steal the spotlight now reads as him gathering information.

His being a little diva has made everyone accept when he comes in and sparkles, which is the perfect cover. Make yourself a spectacle so people don’t bat an eye when you’re around.

His befriending of Deku also has a more sinister undertone, since we all know that All For One wants Deku’s quirk. In the series, it felt like it came out of nowhere, but again, Aoyama is random, so when he leaves cryptic messages (in cheese) on Deku’s balcony, you go, “LOL, that’s just Aoyama being Aoyama.”

Since Aoyama’s parents were the ones who acquired his quirk from All For One, I can’t help but wonder how many families have approached All For One about their quirkless kids. I’m especially curious about this since the doctor Deku went to as a child has ties to All For One. Was that doctor telling parents that he could make their kids “normal” or something? It would be a fast way for All For One to find out who’s quirkless and cherry-pick which kid he wanted to give a quirk to. In a way, All Might was doing the same thing, as he came into town with the intention of passing his quirk down (originally, the candidate had been Mirio).

Of course, All Might isn’t a villainous, suit-wearing prune face, but the parallels are interesting.

I also wonder if Aoyama is the only one at the school with connections to All For One. It’d be interesting if he’s not the only one with parents who decided to go to All For One for help with their child. It would give a lot of weight to characters who feel like they’ve gotten lost in the background, and it would also line up with the image of All For One we’ve gotten throughout the series. He’s intimidating and powerful, but part of that power is due to the influence he has on others.

With Aoyama’s reveal, we see that influence doesn’t just align with the villain side, but with the hero side, too.