The Best of Joss Whedon’s AMA: The Avengers, Doctor Horrible 2, and… Titan A.E.? 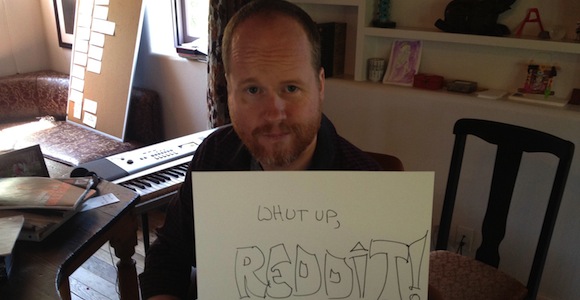 And to think we spent the entire day working yesterday without realizing: Joss Whedon was simultaneously doing an Ask Me Anything post on Reddit, letting Redditors of all kinds ask him questions and answering most of them. With The Cabin in the Woods out this weekend, The Avengers in less than a month, Much Ado About Nothing and In Your Eyes also coming out this year, there’s no question of whether Whedon might be looking for a little publicity for his projects.

Just, as usual, where he finds the time to do any of this. We’ve presented our favorite bits of the AMA, now finished, below:

I’m sure that killing off a character you’ve invested a lot of time in can be tough. Have you ever found that doing this to a particular character has had a profound emotional affect on you? Who was the toughest kill?

Actually, I’m, no offense, very tired of being labelled as “the guy who kills people”. Shakespeare (he’s this hot new writer) does it way more than me, and everyone’s all excited about how he, as it were, holds a mirror up to nature, while I’m like the Jason Voorhees of the writing community. Unfair.

If you’d like to relive Anya’s monologue from that episode, king_of_karma entered it into the record here.

Which joke in your body of work are you most proud of?

Have you ever thought about starting your own internet based “TV” station. Like where people could give you money and you make whatever you want or showcase work of others that you like, without restrictions of the networks &/or the heartbreak of cancellation.

If so, what have been the challenges to making this happen?

I would LOVE to follow in the footsteps of Felicia Day — had in fact pitched this concept to my agent years ago. But right now i’m fielding five movies and I’m realizing that there is such a thing as over-reaching, unless you’re Felicia Day…

I read online that you plan to begin shooting Dr Horrible 2 after you finish up on The Avengers. Is this true, and is there any chance you could give us an idea of what we can expect?

We’re not shooting right now, we’re still in the early stages of writing. But we hope to make a great deal of progress this summer. And you can expect the death of someone you love.

Why did Wonder Woman fall through?

They never really told me. But by the time it was looking grim, I was so burnt, and so excited about my next project, Goners, that was DEFINITELY going to happen, that I didn’t mind.

I was hella pissed at Comiccon during the Iron Man 2 panel when every single male cast member was asked questions, and Scarlet Johansson was only mentioned in passing “you’re hot”. Anyone with eyeballs knows she’s hot, but she worked her ass off to get that role, and she took the time out of her busy schedule and faced nerd musk to support her movie. What are your feelings on this? Have you dealt with the hypersexualization of women in Avengers?

All I can say is that Scarlett gets to do a lot more than be hot in “Avengers”. It’s definitely dispiriting to have a woman play an heroic role and then be reduced to body parts by fan commentary, but that can only change slowly. And is.

I would love to know anything about your personal motivations for being such a strong feminist, as well as your other positions on atheism, etc. Has being vocal about these positions ever been professionally difficult for you or caused you to lose work?

It comes from how I was raised — and my own very strong sense of being helpless and tiny and terrified (that goes away, right?). The only trouble it’s ever caused me is that once you take a stance as a person, people are always using that as a yardstick in your work, which can be kind of limiting.

While shooting the Avengers how hard was it not to replace Captain America with Captain Hammer?

To see Joss’ answers regarding whether he’d ever write for Doctor Who, his disastrous senior thesis film, what would have happened in the 6th season of Angel, the character he finds hardest to write, and working on Toy Story, you can read the whole AMA right here.