"Terse? I can be terse. Once, in flight school, I was laconic."

After an excellent box office weekend for his latest film, Avengers: Age of Ultron, Joss Whedon has deleted his Twitter account. For good? We can’t be sure. [UPDATE: Now we know why he left.]

It comes after his tweet framing a Jurassic World clip as sexist didn’t land well with some in Hollywood and which Whedon himself apologized for, saying it was “bad form.” It also comes after a more recent tweet which read:

Me: say, that ANNIE remake is pretty darn fun

The director wasn’t shy of hiding his exhaustion and frustration with his Marvel work in interviews on the Age of Ultron press tour, either.

It’s not the first time a well-known individual has deleted their account, and it certainly won’t be the last, but I always wonder the reasoning behind that decision. After all, you could just quit the social media site like comic creator Matt Fraction did famously back in December of 2014. He tweeted, “having a hard time remembering why I want to be part of a system that *lets* johnson/rape creeps/racists do their thing” before adding a simple “bye.” His feed remains live.

We don’t blame anyone who wants to step away, of course, if we didn’t have to be on Twitter for work I’m sure most of us would have done the same by now. But don’t worry, even if Whedon isn’t on Twitter, we know what he’ll be up to at least for a short while thanks to this note from April 24th. 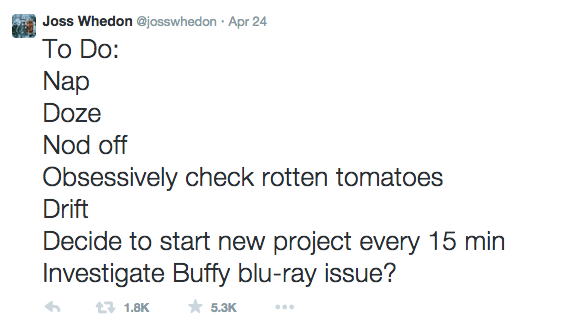